Why is Data's uniform gold and not red?

I'm assuming the following for uniforms, Gold is operations (security, science, engineering, etc.), Red is command, Blue is medical. Data seems to have a lot of command responsibilities, and he is almost always left in charge when both Picard and Riker are gone. I know he has lots of science type of assignments, but I thought in one episode it was mentioned that he was on a command track (I think it was during season 3). Am I wrong that he was on a command track or are my assumptions on uniform colors incorrect? If I'm correct on those assumptions, is there any reason given for Data being in a gold uniform instead of red?

Data served as operations officer and second officer on board the USS Enterprise-D from 2364 until the vessel's destruction in 2371.

An officer who belonged to the command division sometimes wore the division color of another department in which they specialized if said command officer became a security chief, engineer, or commanded a science department. Memory Alpha -> Command Division

Since he did not require sleep, he routinely stood night watch on the bridge. He frequently participated in many of the away missions undertaken. His speed of thought and great strength made him an important asset to the ship, and the fact that he was unaffected by disease, radiation, or mind control was vital on more than one occasion. Memory Alpha -> Data

The Operations position, was typically manned by a member of the Command staff of a Starship, regardless of seniority. On the Starship USS Enterprise-D, Chief Operations Officer, Lieutenant Commander Data doubling as Second Officer), was thereby the most senior member of the ship's crew, excluding the Captain and First Officer.

In-Universe, Lt Commander Data wears a gold uniform to indicate his position as Head of the Operations Division as well as de facto Science Officer and Senior Operations Officer in addition to his position as Second Officer under Captain Jean-Luc Picard and First Officer William Riker.

Other members of Command staff have worn different colours than would normally be expected, notably Admiral Toddman who wears a gold uniform in the DS9 episode "The Die is Cast" confirming that a specialism (in his case Security) can override rank when determining uniform colour. 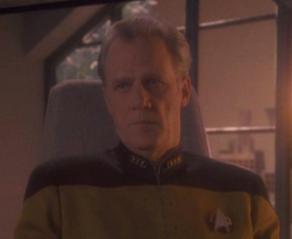 Out-of-universe, the decision was taken to present Data in a gold uniform because of the colour clash between the red (Command) or blue (Science) uniforms and the pancake white & gold face makeup and yellow contact lenses. He was moved from the planned "Chief Science Officer" position (the same role held by Spock, on whom Data was modelled) into an Operations position to justify the change in uniform.

You can see an example of this in the picture below (from Chain of Command, Part II) where Data's new red uniform definitely accentuates Brent Spiner's true skin colour through the makeup. 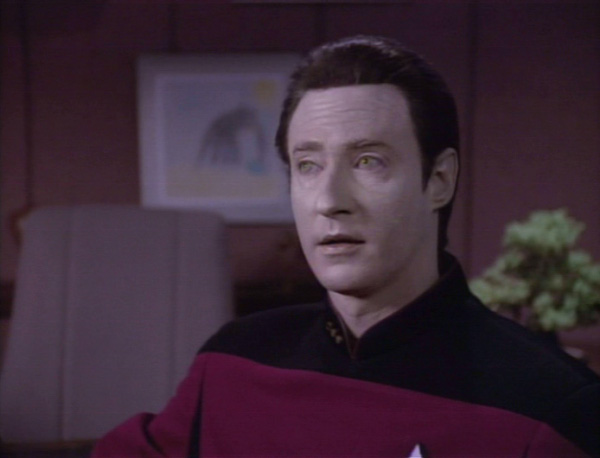 It had nothing to do with the Starfleet command structure. It was a move totally by costuming to find a pale color that would accentuate Spiner's white skin.

62
When did the red shirt careers change to yellow shirts in Star Trek and why?
-1
Why is Kirk dressed in Gold?
9
In Star Trek TNG, what is the division of authority between the first officer and operations officer?
3
Was Geordi really next in line or the appropriate person to take control of the ship?

13
Why does Hoshi wear a Blue (science division) uniform when she is the comms officer?
27
Meaning of uniform color in Star Trek Voyager
64
Has any Star Trek character appeared in all three division uniform colors?
21
In Star Trek, what are all the low-ranking Command Division officers doing?
19
Why did Worf wear red in TNG Season 1?
22
Why did Worf switch to red in DS9?
2
Which Starfleet division did Admiral Kirk belong to in Star Trek: The Motion Picture?
13
Does Data have any direct reports?