How many people can the TARDIS transport?

The interior of a TARDIS is much larger than its exterior, but how many occupants can it transport?

The limitations on TARDIS size are more by volume than by occupancy, but there’s no canonical answer.

The exact size of the TARDIS is inconsistent throughout the show. At various times it’s been infinite or not, and the exact contents of the interior are also inconsistent. One thing that’s usually clear is that it’s big. Very big.

In the episode Journey’s End, the Doctor tells us that the TARDIS is designed for six pilots (hence the hexagonal console), and eight people are inside at the same time. I believe this is the most people we’ve seen inside the TARDIS concurrently since the 2005 reboot.

However, if we go back to the classic series, then the Fourth Doctor serial The Invasion of Time sees a whole Sontaran army wandering about apparently without problem. For an idea of scale, this BBC episode guide states:

The Sontaran army “reckons its numbers in hundreds of millions”.

Even if only a fraction of them were wandering around in the TARDIS, this is still many orders of magnitude more than eight. So this places a lower limit in the millions.

As another data point, consider the Genesis Ark in Doomsday. This uses “Time Lord science”; namely the transcendental engineering that was a hallmark of Time Lord design. The Ark contains “millions” of Daleks, so if we assume the TARDIS works upon broadly similar guidelines, the TARDIS can also hold millions of people.

Finally (this is really stretching it), in Journey’s End the TARDIS can pull of Earth (at about seven billion people) along without apparent problem. If you put the Earth inside instead of outside the TARDIS (don’t ask me how to fit it through the door), I can’t see why you couldn’t bring several billion people along for the ride.

The answer to your question has never been properly answered in the show, but the answer is probably sufficiently large that you’d never hit it in practice. I’ve cited a handful of examples which place a lower bound in the billions, and it’s probably even more than that.

In the "Name of the Doctor" we see the Tardis inflated to giant proportions due to the breaking of its dimension dampeners, resulting in a "size leak" phenomenon.

It's the TARDIS. …When a TARDIS is dying, sometimes the dimension dams start breaking down. They used to call it a size leak. All the bigger on the inside starts leaking to the outside. It grows. When I say that's the TARDIS, I don't mean it looks like the TARDIS. I mean it actually is the TARDIS. My TARDIS from the future. What else would they bury me in?" –The Doctor

I can't speculate exactly how large it is, other than it appears to be huge - larger than a skyscraper. 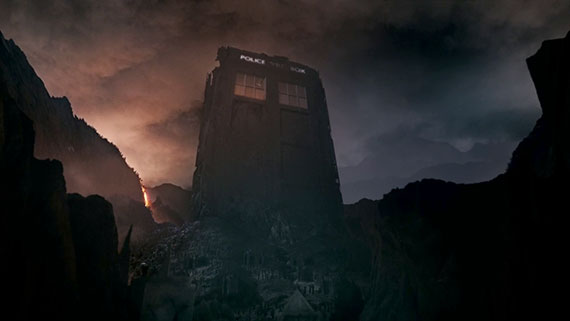 However, in "Journey to the Centre of the TARDIS" (2013), the Doctor later states that the TARDIS is actually infinite in size, as its living metal circuitry allows it to generate more rooms as and when they are needed. So, I believe "infinite" is correct. However, I would argue that this is a perceived infinite, as rooms are created on the fly and don't exist until necessary.

Since what the TARDIS actually does with regards to travel is move through the Time Vortex, it's limitations on transport is by volume, not people. The show doesn't divulge the amount of internal space it has, though it seems to be quite a lot (just look at how many rooms they went through in The Doctor's Wife and Journey to the Center of the TARDIS) though there is a line in The Doctor's Wife that suggests that the space isn't infinite. More information on the size of the TARDIS: How big is the interior of the TARDIS?

13
What’s the maximum number of people that have been in the TARDIS at once?
38
How big is the interior of the TARDIS?
4
Why would this offer of help be attractive?

38
How big is the interior of the TARDIS?
38
How much does the Doctor's TARDIS weigh from the outside?
10
Is There a Limit to Timelord “Bigger on the Inside” Technology?
14
What is the TARDIS' true weight?
28
Has the TARDIS been shown to transport objects bigger than its doorway?
15
How can Ashildr pilot a TARDIS?
12
Was the Doctor’s TARDIS inside Clara’s?
8
How faithful is the "Hell Bent" TARDIS console room to the original?
10
How many nasties does the Doctor keep in the TARDIS?