How can the holodeck in Star Trek: Generations exist around an exit?

In Star Trek: Generations when the crew are in the holodeck for Worf's promotion ceremony at the start, Captain Picard gives a command for the exit to appear. The exit appears in the middle of the holodeck, and he then walks out and leaves.

The exit is surrounded on all sides by people on the holodeck.

Previously, when the holodeck is shown the exit appeared on a wall somewhere, or it made it clear it was on the wall of the holodeck.

Given that the holodeck is an advanced hologram used in conjunction with an omnidirectional treadmill...how could the exit appear in the middle of a room with people on all sides? When Picard walks out into the hallway, he is in the same space as people in the holodeck. 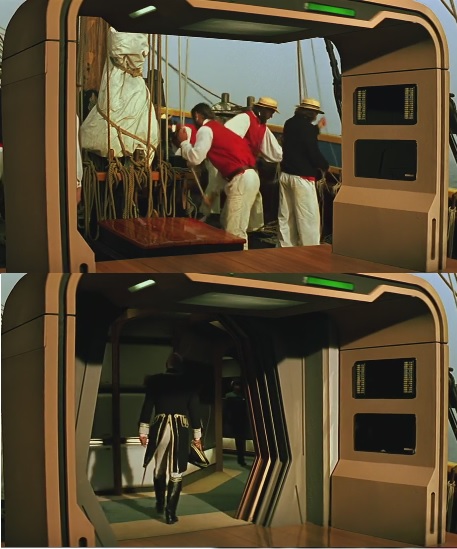 The people behind the exit are not just programs, as there were crewmen standing on all areas of the ship before this scene.

The other answers have the right spirit, but aren't exactly canonical. Here is an answer that takes into account only what is currently known about Holodeck technology of that era.

First, why the era matters. If you remember, way back in episode #1 of TNG, Data tosses a rock at the Holodeck wall and it hits. This early Holodeck tech used a variety of techniques to create the illusion of there being more space than there really was. However, it was not yet able to create enough space to prevent Data from striking the wall.

As the show went on, the holodeck received upgrades. Ultimately, at the end of TNG, they were able to trick Geordi's visor and to create convincing illusions of large spaces. (cave networks, large distances, so on)

Then, by the time of Voyager, the holodecks were capable of doing even more astounding feats. Such as being a venue for skydiving or space flight (gravity manipulation, wind control) and in one case, being linked together into a giant network of holodeck rooms to simulate a Nazi occupation.

The events of Generations takes place during Season One of Voyager, so the holodeck technology of Generations is roughly equivalent to Voyager's level. These are the most sophisticated holodecks shown in all of ST history. And the trick we are trying to achieve is no more complicated than projecting holograms on the walls of the room.

Holograms, unlike traditional projection, use light wave interference to imbue a flat sheet with different images depending on the angle that the image is viewed from. In this case we are talking about a 3D projection of another part of the holodeck. Clearly, whomever programmed the ship simulation thought it would be cute to put the arch there. As for walking past the arch (and into a wall) that can also be achieved with similar tricks that involve moving people without them knowing.

There are many times within the holodeck where individuals are in separate simulated locations [1]. This would strongly imply that that the holodeck is taking into account the individual perspectives of each observer, and projecting an environment unique to each observer. So from Picard's (or the camera's) perspective people could be behind the arch, but that might not reflect the actual physical location relative to Picard.

If you think about the holodeck for a while you have to accept that it's playing around with people's positions and distances from each other. If we stipulate the reality that the holodeck space is not actually behind the door, and that thus the people are not actually behind the door, you have to accept that they're actually physically somewhere in the room ahead of the exit. That they appear to be behind the exit is an illusion.

But real people inside the holodeck can touch each other - this means that after Picard enters the room near the door, he must actually be physically close enough to the others irrespective of holodeck trickery. So, the only conclusion you can reach is that the holodeck is probably constantly moving people around with tractor beams to keep up the illusion. You would ordinarily feel it if you're being shuffled around a room, so there also has to be an inertial dampening component.

Out-of-universe - the writers probably didn't think about it, but thought it would look cool, which it did.

Actually, there are several technologies that were progressively integrated in holodecks. Initially it was mainly a holograpgic technology within the normal space occupied by the holodeck. But the new understanding of the continuum that resulted from the technical work to improve the warp drive also led to the discovery of side-space, which can be opened and connected to our normal space, without being in our space. Then the holographic technolofy operating in side space allowed for more space to be available. People in the side-space holographic scenery were no longer in the holodeck of normal space. Connectivity between side-space and normal space was a very complex operation as can be seen in the nazi episode of voyager.

13
How many people could fit inside a holodeck and not destroy the illusion?

39
Would Star Trek holodecks physically affect you once you exit the Holodeck?
47
How Can the Ocampa Last More than a Few Generations?
15
In Star Trek: Generations, how is that Guinan was on the refugee ship?
14
Why would Professor Moriarty “cease to exist” if he tried to exit the holodeck via the arch?
6
Did Star Trek invent the holodeck?
157
Why are there so many 47s?
20
Do Grays exist in Star Trek?