I've been trying to remember the name of a British children's science fiction show from (I think) the 80's.

The show revolved around two robots who lived on a planet made up of junk. I think the robots were also made up junk, one of the robots was bipedal (with wheels instead of legs) the other was I think dog shaped, and might have been made out of a scooter or a moped.

I think it was stop motion, like Button Moon or The Clangers, and I seem to remember the theme tune sounding like “Ashes to Ashes” by David Bowie.

Each episode revolved around them finding a piece of lost human technology and completely misinterpreting what it was.

There were only two robots in the show, as far as I can remember everything else on the planet had ceased to function.

The two characters were gender non specific though I think the implication was that the one that stood upright was male.

The one that stood upright pretended to be knowledgeable about everything the other one just went along with it.

There was an episode where they found a slot machine and they thought that it was a map of the stars with the lemons and oranges that came up representing different colored stars.

A similar question (now deleted) came up over at Movies & TV and it's also what Omar is looking for, so I'll post the answer here as well.

CP & Qwikstitch was a British kids show from 1985 about two robots from planet Junkus Minor, where all the broken machines from the galaxy ended up. They were made up of old machines; one was bipedal (and had irons for feet) and the other one was dog-like and moved around on a skateboard. The show was indeed stop motion, using cutout animation. There's an old clip available on the RTÉ Archives website, and here's a picture from it: 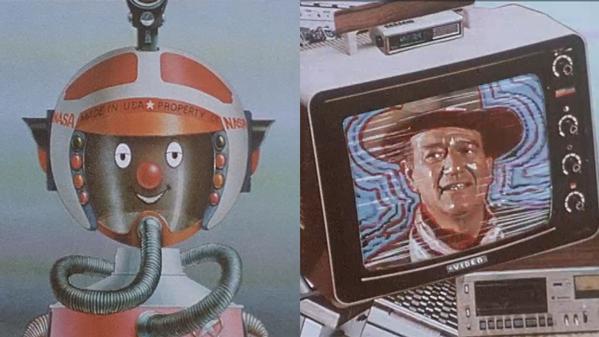 Romie-0 and Julie-8 is the third animated television special made by Nelvana Limited, inspired by William Shakespeare's Romeo and Juliet. Set in the future, the two romantic leads in this version are androids who fall in love despite a taboo against their kind having such relationships.

The special is also known as Runaway Robots! Romie-0 and Julie-8.

If I didn't know better, I'd say you took a shine to that female junk pile. -Mr. Thunderbottom

What's the matter with you? You can't like that impertinent bucket of bolts! -Ms. Passbinder

You're just a robot. You can't have feelings! -Ms. Passbinder

If I can't have feelings, how come I'm feeling this way? -Julie-8

Our companies have hated each other for years. They'll never let us fuse. -Romie-O

It was the first Google result for "two robots who lived on a planet made up of junk".

The show is centered on eleven Little Robots, each with his own distinct looks and personality. They were abandoned on a scrap heap in a junkyard until Tiny, the central figure of the story, fixed them. The robots set to build a world of their own, using junk to build their houses, gadgets, plants and flowers, and even their own sun and moon.

The centre of their world is the Nut And Bolt Tree, a big, metallic structure that serves as a home to Tiny. Other important features of their world are the Day-Night lever, which causes the sky to rotate 180 degrees, switching from night to day; and the junkyard, that's constantly receiving junk from the surface through a chute.

Not the answer you're looking for? Browse other questions tagged tv robots story-identification or ask your own question.

33
Title of a time travel movie involving a boy in alien armor and a girl?
6
Children's science fiction book series and tv show
10
Show/movie with James Dean and time travel to prevent/ensure a car crash
6
Stop motion sci-fi kids show
4
Movie with humans battling aliens piloting giant animalistic, water-walking robots or sea warships
5
Name of Mecha Anime from the 70s/80s Based on One Episode
10
Old stop motion cartoon series about a group of kids solving some cases about monsters