There is quite a bit of fan fiction from the Star Wars universe out there. Most of it is pretty bad. Some of it is quite good. As best I can tell, Star Wars fan fiction has been around for quite a long time. Have any notable elements from any fan fiction stories made it into actual Star Wars canon (C-Canon or higher)?

What's the Story? counts, I think:

What's The Story? was an exclusive feature on the Star Wars fan club website, Star Wars Hyperspace. It gave Hyperspace members a chance to leave their mark on the Star Wars Expanded Universe by allowing them to provide the backstory for certain aspects of the saga; usually obscure background characters or vehicles from the films. Winning entries became official Star Wars lore: published in the Databank and added to the Holocron continuity database.

While “What’s the Story” comprised a planned official contest by which winning entries would become canon, there is at least one element that was purely pre-existing fan-fiction that was brought into EU as a major element: the Coruscant Knights “Teepo Paladins.”

Coruscant Nights I: Jedi Twilight was the first, and as of this writing, the only official source to describe the Teepo Paladins and their background. However, they were created by fan, Peter Skanes, and collected in an unofficial fan-made supplement to West End Games' Star Wars roleplaying game called "The Jedi Handbook".

Since I was a member and active on the list at the time, the Teepo Jedi may have been sent to the SW-RPG Mailing List by Skanes even before being compiled in the Handbook. The Jedi Handbook included the Teepo Paladins as far back as 1997.

The creator of the Lambda-class shuttle, Cygnus Spaceworks, was first named in an unlicensed set of blueprints published in 1984. According to a now-archived blog post by jSarek, the author of The Written Word, a Legends-canon StarWars.com article about in-universe writing systems:

The Cygnus Star Empire may be familiar to some folks. It originates with the fan publication Book of Imperial Shuttle Plans: Cygnus Spaceworks, originally released by "Lawrence Miller Design" in 1984. Cygnus Spaceworks, which also first appeared in that work, was made canonical over a decade ago. A Cygnus B star system dates back to 1979, when it appeared in the "Cantina Communications" article in Star Wars: Official Poster Monthly #16. Given all these references to Cygnus, it seemed reasonable to make the Cygnus Star Empire a canon location.

A scan can be found on theforce.net, confirming that it identified the shuttle's manufacturer as "Cygnus Spaceworks": 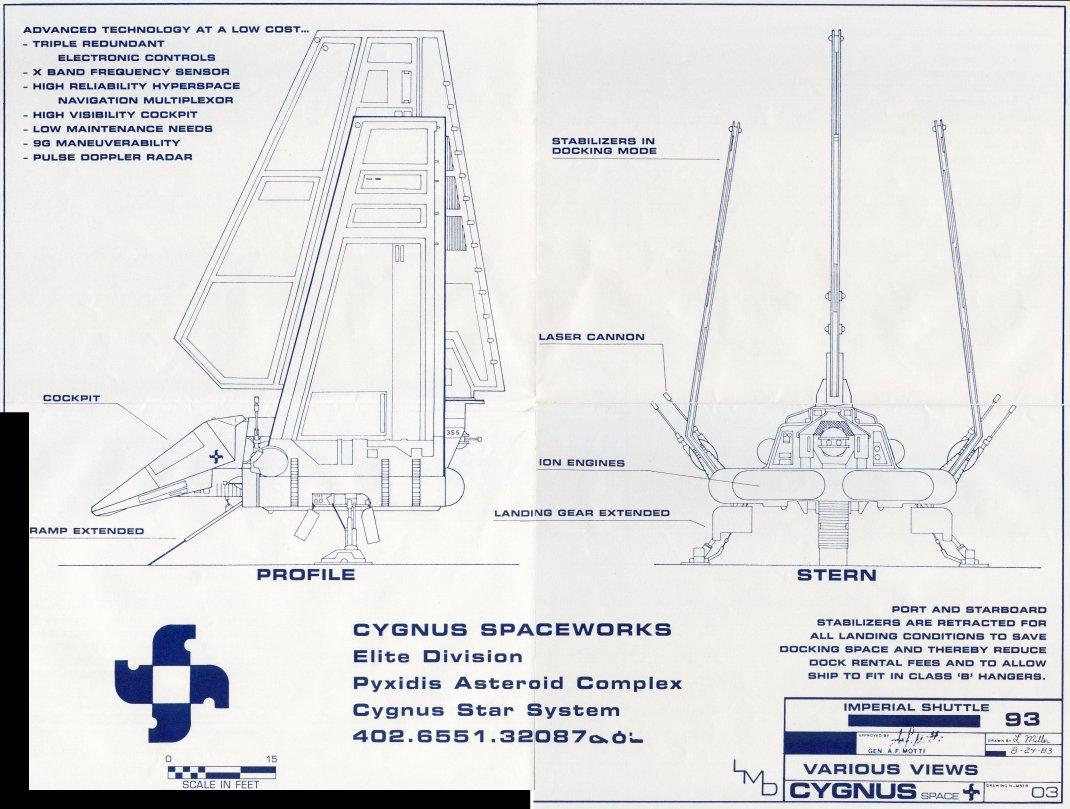 Since then, Cygnus Spaceworks has appeared in both Legends and Canon material.

Not the answer you're looking for? Browse other questions tagged star-wars fan-fiction or ask your own question.

23
Is there an "official"-ish complete chronological order for Star Wars C-canon material (books+comics+games)?
19
Star Wars fan website with false claims
8
Is there a concept of "parallel/alternate" universes/realities in Star Wars canon?
10
Is there a supermassive black hole at the Galactic Core?
10
Black Holes in Star Wars
16
How many confirmed LGBT characters have appeared in Star Wars materials?
7
Is there any evidence in Canon for how long specific hyperspace trips actually take in the Star Wars galaxy?
15
How developed is Huttese?