Help to identify a sci-fi trilogy of books - similar to three musketeers, moon as a casino [duplicate]

I'm trying to identify a trio of books I read as a teenager. They were set not too far in the future with the main character getting into a series of adventures with three older soldiers(?) One of the older men walked with a cane which was really a blaster. One of the novels included the moon having been turned into a big casino and one turned on the fact that the bad guy had an allergy to the main character which was used to identify him. It's been driving me nuts for a while, any help appreciated.

Thanks for the replies - I finally found out what it was, The Legion of Space series by Jack Williamson.

"The story takes place in an era when humans have colonized the Solar System but dare not go farther, as the first extra-solar expedition to Barnard's Star failed and the survivors came back as babbling, grotesque, diseased madmen. These survivors spoke of a gigantic planet, populated by ferocious animals, and of the single city of the evil "Medusae". The Medusae are elephant-sized, four-eyed, flying 'jellyfish' with hundreds of tentacles. The Medusae cannot hear or speak, but communicate with one another via radio waves." 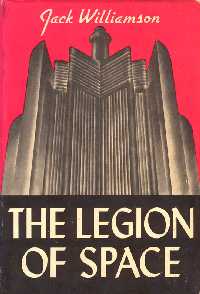 Here's a synopsis for the the first book in the series:

"Moonbase Vegas has become a mecca for wheelers and dealers--and a bagman named Deuce McNamara. Working for one of the six controlling families, the Borgiolis, Deuce enacts the dual roles of both dealer and agent, until he realizes that this cutthroat game is about to explode into an all-out mob war for control of the Moon."

This may not be it but I was reminded of Alexei Pansin's Villiers' books:

The three Villiers books (not technically a trilogy, but rather the first three books of a projected longer series; sadly, the fourth book in the series has been pending for thirty years now) are:

They concern an impoverished but dashing young man, Anthony Villiers by name, who wanders the interstellar Nashuite Empire in the company of a woolly, toadlike humanoid alien named Torve. Villiers, it develops, is a remittance man: he doesn't get along with his family, so he is "requested to travel . . . and is provided with a reasonable amount of money [sent to him in installments as he travels] as long as he stays away from home." (Star Well, ch. 5) Unfortunately, the remittance doesn't always arrive at the expected place and time. The result is that Villiers can move in the highest of high society but never has quite enough cash on hand.

Over the course of the three books there are duels, and assassins, and bureaucrats, and syrupy children's-book authors, and incisive narratorial comments, and wry irony and wit, and laugh-out-loud funny bits. The whole series, especially the second book, is charming and highly recommended, especially at this price, especially given that the series is long since out of print and probably difficult to find anywhere else. (Though you can occasionally find copies of Star Well or Masque World at used bookstores.)

15
A book featuring the superweapon AKKA
6
Aliens plan to invade Earth but hero, scientist, and girl friend stop them

7
Book where main character is a mercenary and there are flashbacks about a sandbox
5
Help identify 1980ish fantasy trilogy about three brothers
8
SciFi novel about scientist, terraforming and soldiers
25
I'm looking for a Sci-Fi book with a female protagonist who doesn't wear logos
10
Detective novel with sex, monsters and aliens
5
A story (novel?) about a man becoming trapped in a “fairy world”/Magonia after travelling down a Bermuda triangle type of road
11
Novel about 'magic' on the moon where a woman loses her memory when a silver needle is inserted into her head