Why did they choose that theme song for Star Trek Enterprise?

In all the series of Star Trek, except Enterprise, the theme music has no words and seems to inspire the general Star Trek "march" of "boldly going where no one has gone before." Enterprise's theme is markedly different.

First, it has words. When looking at these words they seem to inspire "we can do it" rather than "see what is out there". Considering the tensions with the Vulcans and that Enterprise is outgunned by nearly everyone they meet this makes sense.

Second, the music itself is completely different. It has a sort of country-rock, home town feel. Something like what you might expect John Mellencamp or Bryan Adams to sing. There is no marching band feel that you get with Voyager's or TNG's theme, which is sort of there with DS9, and with TOS, well, let's just leave that in the 60's where it belongs.

So my question is why is the theme song completely different? It seems outside of the original spirit and scope of the Star Trek that Gene Roddenberry created. To make things more confusing, the song was sped up a little and was made a little more bouncy starting in the third season. Did Rick Berman or anybody else who was part of the crew comment on it?

I've always felt that they were trying to distance themselves from the geeky/trekkie image of the rest of the franchise in order to attract a larger and younger audience. TV dramas had already begun adopting pop/rock songs as their theme songs, and Star Trek ratings were stagnating, with many people feeling that TV viewers were getting sick of Star Trek and its original message of peace/optimism/tolerance/etc.

So instead of a sci-fi-appropriate theme song, they chose a bland soft rock track that you'd more likely associate with Dawnson's Creek or Charmed (at least they chose a decent song to cover for that one). The intro imagery was also controversial, as it seemed to be very American-centric for a post-Cold-War show about space travel and galactic unity (and during the United Earth era, no less).

Other things that point to producers trying to target a non-trekkie crowd include the sudden dramatic increase in much younger and more attractive (by Hollywood standards) main cast members, which the show was keen to show off in the new sexy decontamination chamber: 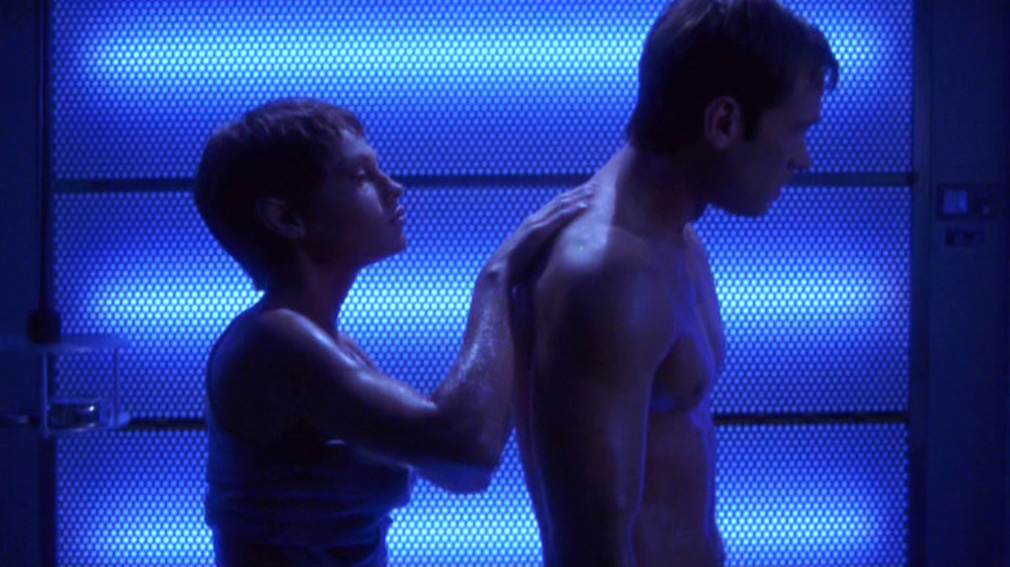 Maybe they were trying to make the show seem more contemporary feeling. So they adopted more NASA-like uniforms and fashioned the show in the image of other popular TV dramas. But they clearly missed the mark in trying to create a successful Star Trek series.

"Archer's Theme" is an instrumental piece of music used over the closing credits for the Star Trek: Enterprise series. It was composed by Dennis McCarthy.

The theme was originally intended to be played over the opening credits of the show. McCarthy, having also composed the theme for Star Trek: Deep Space Nine, wrote the piece in a style reminiscent of the later Star Trek series. Even though the piece opens with a subdued but recognizable version of Star Trek theme fanfare; McCarthy wrote it in keeping with the spirit of the show to be overall less classical and more modern instrumentally.

The producers' decision to use "Where My Heart Will Take Me" in its stead was a controversial decision that the producers made in an attempt to make the series appeal to an audience wider than that of existing Trek fans.

Here's a fan-made video of "Archer's Theme" with Bakula narrating the intro monologue/Captain's Oath over it.

This was addressed (in very considerable detail) in a series of interviews with the show's showrunners for the 'The Fifty-Year Mission' oral history book.

In brief, there was a desire to make the show hipper, more accessible for non-trekkies and to bring the whole thing closer to the modern day. There's a general willingness to accept that the theme was a mistake.

Rick and I felt that a song would set the slightly more contemporary feeling we were going after with Enterprise. For the longest time, we had a temporary song we cut the main titles to, U2’s “Beautiful Day.” If we had used that—or could have afforded it—that would have been a great song. Those main titles with U2 are amazing. It’s hip and cool, whereas the song we ended up with is awful. I’m a big fan of Diane Warren, she’s a great songwriter, but this particular song and the way it was sung was tacky. I still cringe when I hear it and, by the way, I think the song had a lot to do with people’s adverse reaction to the show. If you look at the main titles themselves, it’s a really cool sequence. But the song is awful, just awful.

If you heard the theme to Next Generation, it’s instantly identifiable, even Voyager’s theme to a lesser degree. You know what it is, and you have a certain fondness for it. I don’t know a whole lot of people who have anything but a kind of ironic fondness for Enterprise’s theme song. It was a little bit out of my hands in terms of selection of the song and the singer. There wasn’t a lot I could do about it. I’m not really all that musically knowledgeable. I felt like Rick and Peter Lauritson, who was our post supervisor, were the music men, but there wasn’t a lot I could say that would have changed Rick’s mind. At the end of the day, Rick was my boss.

This is another example of my being stubborn, right or wrong. I thought it would be nice to have a theme song. Nobody had ever done it before. I knew that I wanted the animation at the opening instead of just being the flying through space stuff that had existed on all the other Star Trek shows. But I wanted it to be sort of a compilation of the science and the people that led up to the space flight. Our visual effects people put together an amazing visual montage. Then we went to a very famous, contemporary composer named Diane Warren, who’s written huge hits. She went through a whole bunch of songs and we came up with this tune that she had written. The lyrics seemed perfect. Then she got all excited, there was a British singer named Russell Watson and he was a very hot performer. Kind of semioperatic and pop performer, and he agreed to sing it. It basically spoke to exactly what we were looking for—a dream of going out into the unknown and the whole idea of bringing one’s heart to what matters. We recorded the song and put it to the animation and everybody thought it was terrific. And the audience hated it.

In the second or third year, the network said to us, “Can you rewrite the song and could you make the song hipper?” We left the vocal on, but we did a completely different instrumental with a lot more electric guitars and things to make it a little more rock and roll. I don’t know if anybody was truly satisfied with that. I, for one, can tell you that I thought it was a great opening and I’m not alone in that. I don’t think I’m in the majority, but I’m not alone.

It gets back to the people running the franchise saying, “We’ve got to do something different. We’ve got to shake it up.” And kind of shaking it up in many of the wrong ways. Let’s say all the wrong ways. I don’t think it’s a bad idea to have a non–Jerry Goldsmith opening. When they showed us the opening graphics, it was set to U2’s “Beautiful Day,” which is an amazing song. Obviously we couldn’t afford that, it was all temp, but we ended up getting a Diane Warren song and she was a Star Trek fan. She gave it to them for next to nothing.

The Fifty-Year Mission: The Next 25 Years: From The Next Generation to J. J. Abrams: The Complete, Uncensored, and Unauthorized Oral History of Star Trek

Not the answer you're looking for? Browse other questions tagged star-trek star-trek-enterprise music or ask your own question.