A movie about haunted house

It was probably a TV movie. It was black and white, probably 1940smth-1960smth. It was about a family who lived in a haunted house on some kind of hill by the sea. The house was haunted by three ghosts - maid, butler and female owner - they were in love triangle: the owner was in love in butler, he was in love with the maid, so the owner killed the maid, I suppose butler tried to stop it or killed himself... something like that. The ghost weren't evil, they were fighting with each other, like they were still alive, like they were reliving their life once more. I remember some scenes of ateir argue in the kitchen...

I remember there was a really fat uncle in that family who fell down the hill and died. I remember him walking with one of the ghosts.

I remember also there was some scene at cemetary - a young boy tried to find out who were the ghosts from local friend.

It seems like forever to find this movie... and it is not a "Haunted house on the hill" It wasn't a scary movie, rather funny, a little romantic (?). 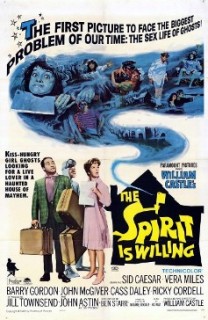 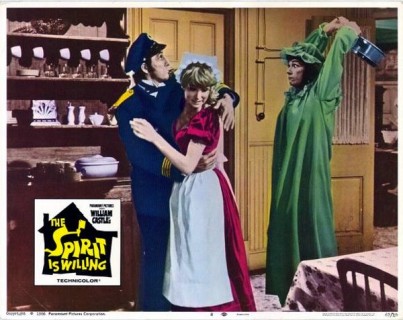 It's in colour. So my guess is you watched it on a B&W TV set; this bootleg print should give you an idea :-) Anyway, here's how the movie begins:

Ben Powell, his wife Kate, and their teenaged son Steve rent a New England seaside house for their summer vacation. Unknown to them, the house has been haunted ever since the day, 100 years before, that Felicity Twitchell accidentally met her death while axing her unfaithful bridegroom Ebenezer and their servant girl Jenny.

The spirits in question are featured in the lobby card on the top right. Some of the other plot points you covered:

The three ghosts, infuriated that their private domain is being invaded, go on a spree of destruction, for which young Steve is blamed.

The scene at the cemetary...

Frantic, Steve seeks the aid of two local sisters, Priscilla and Carol, direct descendants of Jenny. Priscilla convinces him to hold a graveyard séance and invite the ghosts to a matchmaking masquerade party.

The party, however, turns into a shambles when Felicity becomes so enamored of Uncle George that she pushes him off a cliff in order to make him her ghost-husband.

~ Synopsis edited from TCM and Twins Of Evil.

Not the answer you're looking for? Browse other questions tagged story-identification tv ghost or ask your own question.