Where is the Old One?

In the video game Demon's Souls, you must face the Old One, who is presumably the entity mentioned in the opening:

On the second day, upon Earth was planted an irrevocable poison

As this text appears on the screen, we see a beach with a distinctive rock formation, covered with hooded figures.

In the game's ending, we see this beach in person when we descend below the Nexus to finally face the Old One. I'm assuming it's the same beach because the same rock formation can be seen. My question is, do we know where this place is? It seems meaningless to simply say it's 'below the Nexus', because the Nexus seems to be primarily a metaphysical construct, and anyway we don't know where the Nexus is either (do we?).

I realise this question probably doesn't have a straight answer, but it would be nice to shed some light on it.

As much as I hate to say it, the 'End Zone' level in Demon's Souls is literally below the Nexus.

You jump into a great big damn hole and land on the floor below. Heck, even the official Demon's Soul Wiki describes the level as "Below the Nexus", as does the Official Player's Guide 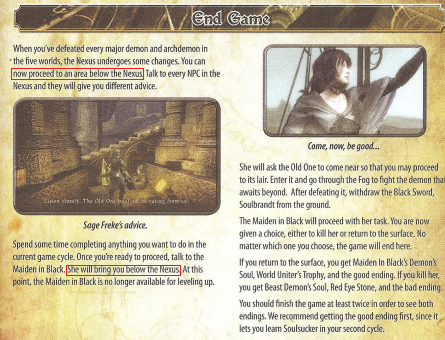 Out-of-universe, you can see that the game level is physically the lowest level of the gamespace with nothing below it.

Not the answer you're looking for? Browse other questions tagged video-games demons-souls or ask your own question.

4
Where does Master Chief find himself at the end of Halo 3?
19
Where did the Space Invaders come from?
1
In Homeworld, how the people of Kharak forget where they came from?
8
Where does vault 101 get its food?
12
Where did the sixteen Colossi come from in the game Shadow of the Colossus?
21
Where do Koopa Paratroopa wings come from?
32
Old 1990's point and click game, first person adventure, odd story