Can Dr. Manhattan cease to exist?

Jon Osterman, a.k.a. Dr. Manhattan, has complete awareness of and control over atomic and subatomic particles of his "body". He can reassemble his body even when disintegrated, which renders him practically immortal.

Can he willingly cease to exist? In other words, get into state when he would not be able to do reintegrate (or anything else) anymore?

Yes, Dr. Manhattan has the potential and perhaps inevitable descent toward entropy all things must ultimately embrace. He will either succumb to natural forces which may erode his abilities or psychological dissolution as he becomes more inhuman over time, thereby destroying the very humanity which allowed him to transcend death and gain his powers in the first place.

Jon Osterman a.k.a. Dr. Manhattan is a form of living consciousness bound together by the accident which subtracted his "intrinsic field".

Dr. Manhattan is the only character in the Watchmen series to explicitly possess superhuman abilities. Throughout Watchmen, he is shown to be immensely powerful and seemingly invulnerable to all harm; even when his body is disintegrated, he can reconstruct it from atoms (in less than a minute the second time this happened). Jon has complete awareness of and control over atomic and subatomic particles. He can alter his body's size, coloration, density, and strength. He does not need food, water, or air, and is, for all intents and purposes, immortal. He can teleport himself and others over great (even interplanetary and perhaps intergalactic) distances.

His only apparent limits are the physical origins of his previously existing organically-derived mind. He still thinks like a Human because he was once human. As he developed in the use of his powers, his connection to humanity became more tenuous. 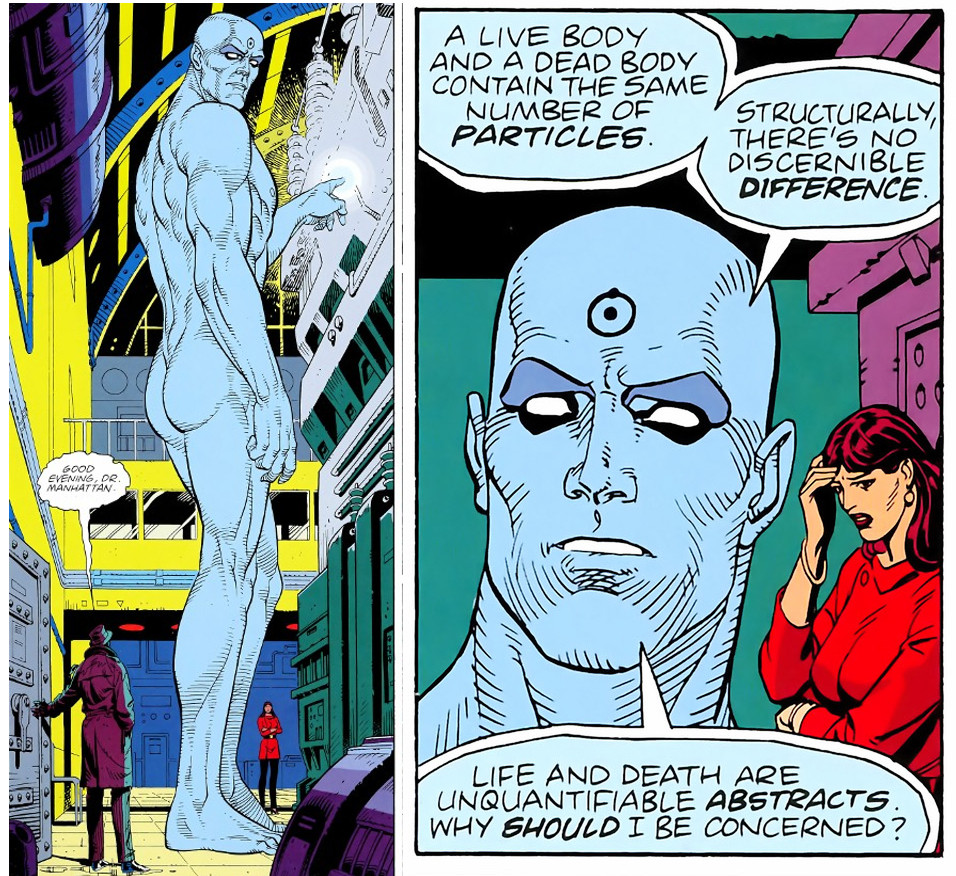 He would alter his size to be able to reach a component, or split himself into multiple beings to work at more than one place at the same time. These events would slowly erode his humanity, showing him just how far from the Human experience he has come. 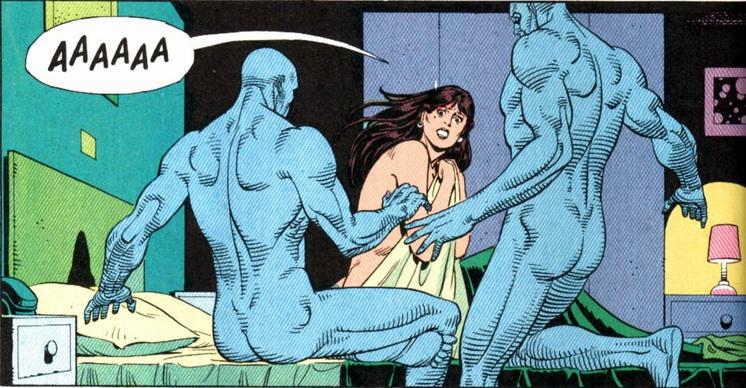 A clear limit to his physical powers is never explicitly shown, however perhaps his biggest limitation appears to be apathy. In some sense, unlimited power has come at the cost of the total absence of responsibility, and his phenomenical omnipotence is juxtaposed with his growing detachment. Although he doesn't age in the biological sense, his character has changed over time with gradual detachment from humanity. 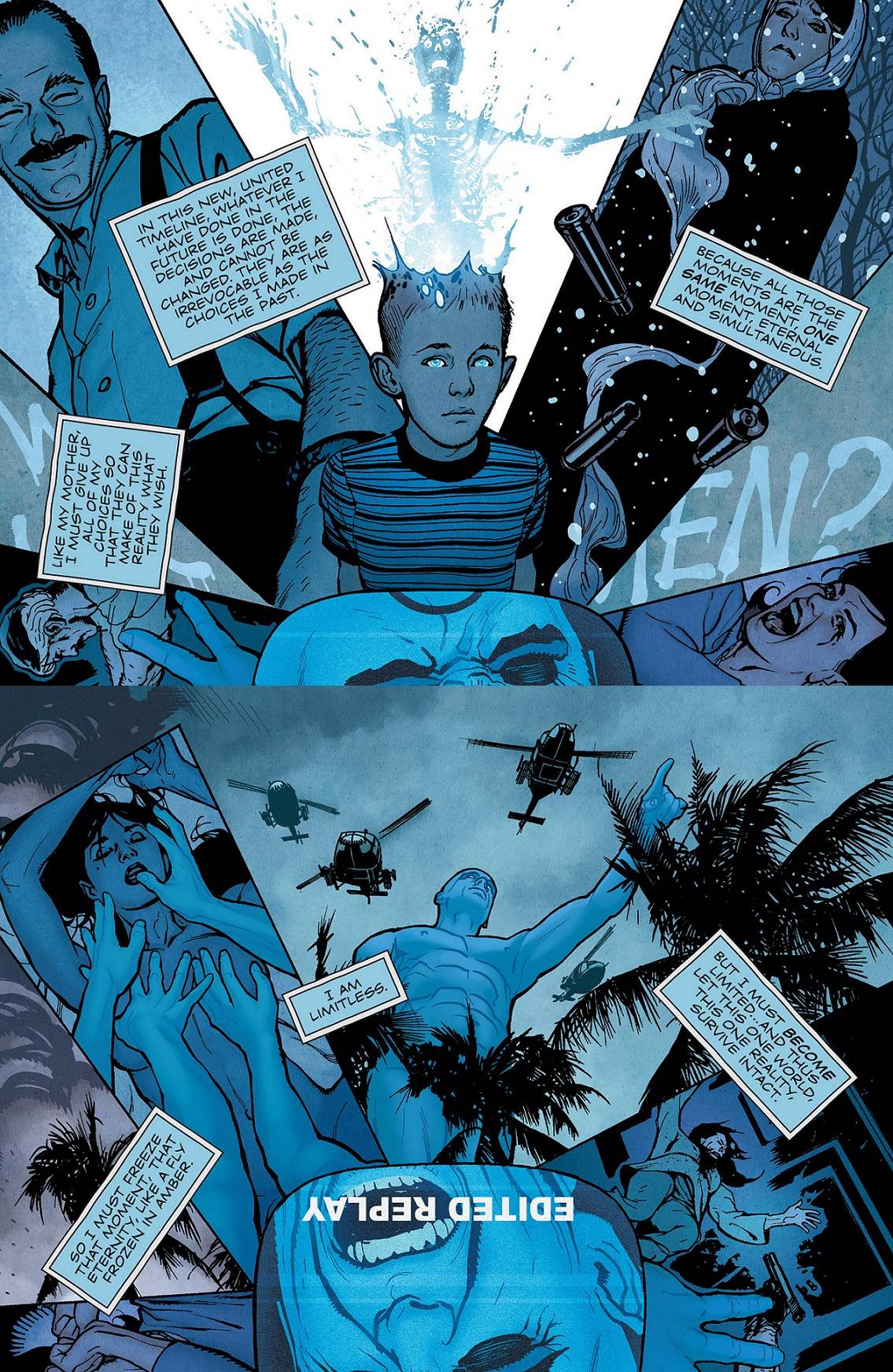 At the end of Watchmen we are lead to believe he will return to Earth for a time to watch the thermodynamic miracle that is Humanity. But I wonder how long will such a thing be able to hold the attention of a man who can be in multiple places at the same time, living in the past, present and future, while study both the microscopic and macroscopic physically, standing on both atoms and stars? 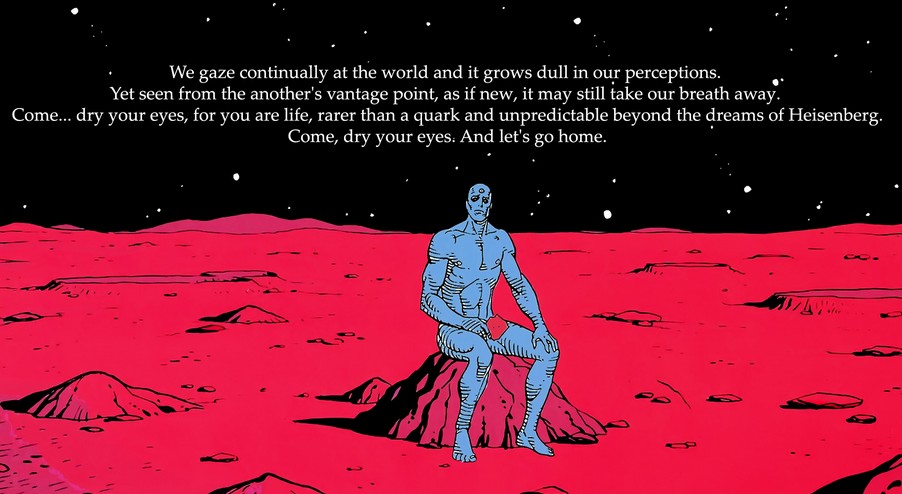 I'm not a Watchman expert (waiting for Thaddeus' answer to this question impatiently) but since I really like the franchise I'll give it a try.

The way I understand it, not only has he a complete control over the particles of his body, but since he can teleport away, I definitely think that he can also re create his body from nothing.

The very existence of Dr Manhattan is not at all correlated with the existence of his body. After all, he says to Adrian (emphasis mine)

Reassembling myself was the first trick I learned. It didn't kill Osterman... did you really think it would kill me? I have walked across the surface of the Sun. I have witnessed events so tiny and so fast they can hardly be said to have occurred at all. But you, Adrian, you're just a man. The world's smartest man poses no more threat to me than does its smartest termite.

He certainly didn't witness those events with his eyes (that would violate physics, because it would mean that his eyes, composed of many atomes, could be shrinked smaller than one atom). So he probably "felt" those events.

The conclusion is that his existence isn't tied with his body but only with his consciousness. Which give us some elements of answer.

The Dr Manhattant doesn't need a body to exist, so "cease to exist" would mean "abandon his mind, his self-awareness" but... why would he do that ? He seems to enjoy life, because he told Miss Jupiter he would create some of his own when he leaves the Earth.

This is a lot of suggestion, but I guess it's normal for this question...

Its pretty simple really he is a alpha and omega. He will one day decide to create his own universe or life as he puts it vaguely. And in this regard he becomes a clock of his own just as our universe just ticks along in a somewhat predictable clock like fashion. And when he does finally decide to do this I do not believe he will be able to reverse his own big bang as he will start a clock not bound by time there for becoming the beginning and the end of his own existence

Yes. You've answered your question yourself. If he has complete control then he can also destroy himself.

18
Was Dr. Manhattan able to travel through time?