I've read some fan fiction dealing with the inheritance cycle, and some of the writers make Shruikan's size absolutely huge (far bigger than he appears in the 2006 film). We know that Dragons never stop growing, and that the largest dragon was Raugmar the Black. But we don't know exactly how big he was.

Is there any indication in any of the bigs how big Shruikan is, beyond "huge" or "very large"? I don't remember this being stated in the books.

ANYWAY, the books give a much better estimation of the fell dragon's size. If you've read the books, you'd know that the party eventually encounters Shruikan, and at first mistake his side for a strangely patterned wall in a massive, massive audience chamber.

I hesitate to say more, as it seems like you haven't read the novels, and I wish not to spoil anything. But read the books, they are wonderful and will answer this question eventually.

Edit: screw it, spoil'ahs ahead!

At the end of the final book, Eragon and co. make their way to Galbatorix's throne room. This room is friggin massive. One entire wall is covered in a decorative curtain. During the confrontation w/ Galby, that curtain...moves. It wasn't a curtain, but rather the wing of a massive dragon (Shruikan). Shruikan is freaking massive. He takes up a huge secondary-chamber to the massive throne-room.

This scale diagram has been officially sanctioned by Christopher Paolini: 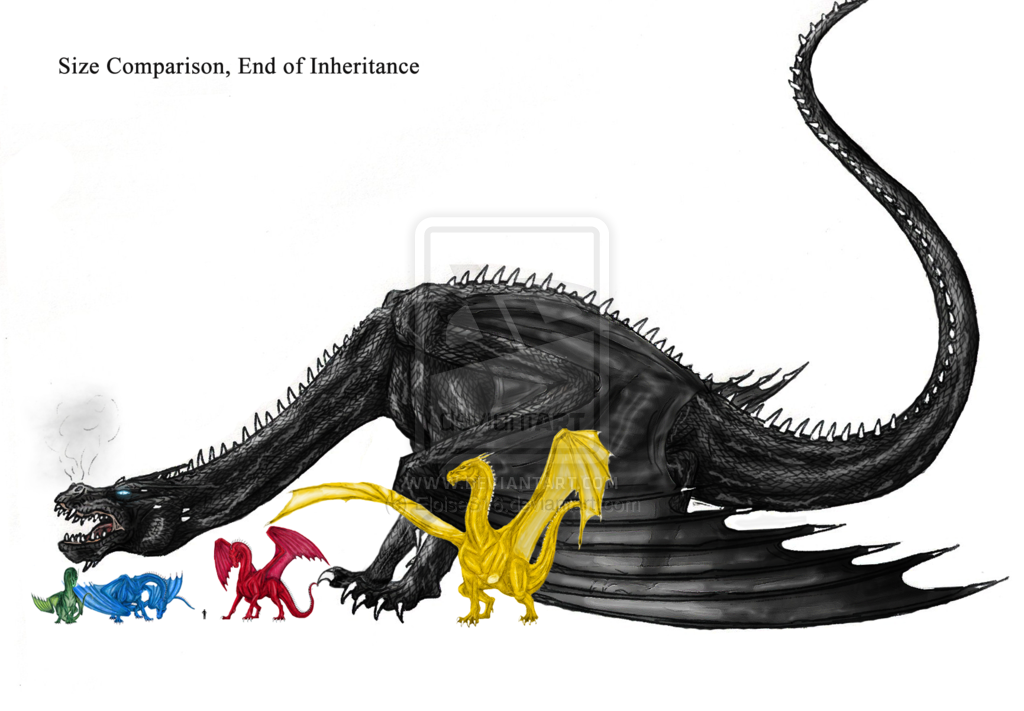 It shows (from left to right) Firnen, Saphira, Eragon, Thorn, and Glaedr, with Shruikan dominating all of them. It's fan art, made by one EloiseS16, but Christopher Paolini has confirmed on Twitter that this drawing is accurate:

The dragons of the series to scale. Might make Fírnen a little smaller, but otherwise dead on:

Since the picture includes a human being (yes, that little smudge between Saphira and Thorn), you can judge for yourself just how big Shruikan is.

Christopher Paolini answered this question on his Reddit AMA.

How big was Shruikan?
Biiiig. Big enough you could swim through the chambers of his heart.
(Source)

To give proportions to Shruikan, it is observed that he is larger than Glaedr but not quite as large as Belgabad.

What struck him most was their size. A few of the dragons had been smaller than Saphira, but most had been far larger. The biggest he saw was a skeleton with ribs that he guessed were at least eighty feet long and perhaps fifteen wide at their thickest. The skull alone - a huge, fierce thing covered with blotches of lichen, like a rough crag of stone - was longer and taller than the main part of Saphira's body. Even Glaedr, when he was still clothed in flesh, would have appeared diminutive next to the slain dragon.

So, indeed, Belgabad's ribs were 80 feet long and 15 feet wide. Also, just his head was about as large as Saphira.

As for Shruiken's size by comparison:

The sound was unmistakably that of a dragon walking on stone. But what a dragon, to hear its steps from over a mile away! ... How big is he? Eragon wondered, dismayed. Bigger than Glaedr, that was certain. As big as Belgabad?

He was said to be about the size of belgabad, who had ribs which were 80ft long and 15ft wide. so overall he was pretty big

beastbeast
11
1
Add a comment  |
Highly active question. Earn 10 reputation (not counting the association bonus) in order to answer this question. The reputation requirement helps protect this question from spam and non-answer activity.

Not the answer you're looking for? Browse other questions tagged dragons inheritance-cycle or ask your own question.

14
What is Angela's back story?
9
What about all the dragon-poop?
18
What does Tolkien say about Ancalagon's physical appearance, especially his size?
12
Why would anyone make a dragon enclosure out of wood?
2
How did Daemon Targaryen control both Caraxes and Vhagar?
26
Books about dragons and war from a cat-loving author
18
Was Balerion three thousand or two hundred years old?