Theoretically, would Harry have been able to control the basilisk, since part of the true heir of Slytherin survived inside him?

I've always been frustrated with this idea. As the storyline between Voldemort and Harry unfolded in the seventh book, we learned of the deep connection between the two. Since part of Voldemort's soul latched onto Harry the night at Godric's Hollow, wouldn't Harry have been able to also control the basilisk hidden in the Chamber of Secrets?

I specifically remember Harry trying to speak to the snake as it moved through the pipes. If Harry could hear the snake, couldn't the snake hear Harry as well, and shouldn't it have responded since Harry's ability to speak Parseltongue was "gifted" to him by Lord Voldemort himself???

Couldn't it simply be that the portion of soul imbued in the diary horcrux was greater than the portion that was in Harry? The Harry horcrux was created last. If yes, then it might be a simple diary horcrux has the larger claim to command when compared to Harry. If I recall correctly the diary was one of his earliest horcruxes. So it may have the greatest helping of Voldemort soul. Harry might have been able to command the Basilisk if the Diary horcrux hadn't have been commanding it to attack Harry.

Harry might have been able to control the basilisk - he never tried.

Harry heard the basilisk in the pipes - but he never tried to speak to it, either when he heard it or when he was in the Chamber of Secrets with Tom Riddle. (In the movie, he started to try, then Tom told him “Parseltongue won’t save you now” and he stopped before really attempting to control it.) Unless the basilisk in the Chamber was different in some way from others of its kind, it would be controllable by any Parselmouth, regardless of their heritage.

“However, since Basilisks are uncontrollable except by Parselmouths, they are as dangerous to most Dark wizards as to anybody else, and there have been no recorded sightings of Basilisks in Britain for at least four hundred years.”
- Fantastic Beasts and Where to Find Them

That it would require a Parselmouth to control the basilisk seems likely to be enough to spawn the legend that only the heir could, since Salazar himself was one and the ability wasn’t particularly common. Harry didn’t try, so this isn’t really proven, but it seems likely that speaking Parseltongue is the only requirement. It was the only requirement to actually open the Chamber - Ron was able to do it without any piece of the Dark Lord’s soul in him, and not being a “born” Parselmouth.

This is something I have always pointed out to fellow fans, only to be shot down. I believe that Harry certainly had the power to control the basilisk, just as Ginny was able to while she was under Tom Riddle's influence. I think it simply comes down to the fact that this idea never occurs to him. It is important for readers to remember that Harry's ability to speak parseltongue was a newly discovered talent. If he had been more seasoned, perhaps he might have thought to try.

Slytherin's heir only had an advantage over others when it came to snakes because of the communicative power between them. The snake still maintains autonomy and free will; it simply chooses to follow the wizard's bidding more often than not, because the parseltongue can understand and command him. Proof of this can be found in book 6 when Morphin, who is also a parselmouth, is singing to a snake. He says something along of the lines of "you be good to Morphin or he'll nail you to the door". There is in fact a snake already nailed to his door, suggesting that a previous snake behaved aggressively towards him despite Morphin's ability to communicate with it.

That in mind, Salazar Slytherin was taking an awful risk in assuming that just because the monster he left behind was a snake, that it would follow his heir's bidding. It could have just as easily finished the heir off and went on a rampage, killing pure bloods and muggles alike. Now that, would have been a plot twist.

Parseltongues don't control snakes, they just talk to them.

Yes.Riddle never says it in the book the only problem is the basilisk is eged on to kill Harry by Tom Riddle aka (Lord Voldemort). 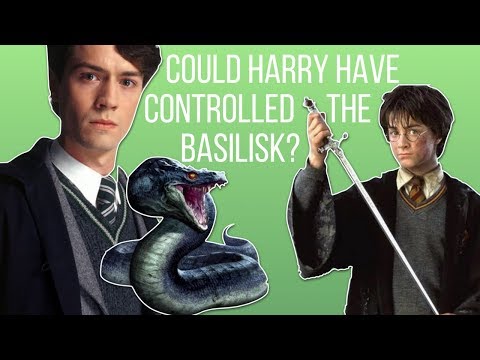 Not the answer you're looking for? Browse other questions tagged harry-potter voldemort basilisk slytherin parseltongue or ask your own question.

42
How Could Hogwarts Have Realistically Accommodated the Basilisk 800 - 1000+ Years Ago?
11
How come Nagini had magical powers?
8
Does Lily Potter's sacrifice make Harry and Voldemort immortal?
14
Why must Harry Potter be told that a part of Voldemort's soul latched itself onto the only living thing it could find, again?
7
Why didn't anyone else hear the Basilisk hiss?
16
How is Harry still a Parselmouth?
2
Was Isolt Sayre a Parselmouth or not?
11
Can Muggles learn Parseltongue?