90s novel: wood nymph (similar to an otik) who becomes a scientist

I am trying to hunt down a book I read in the 90s, but lost some time ago. It starts with some children wandering in a wood, and they encounter a wood nymph creature that starts following them around. Eventually, the wood nymph becomes accepted, and starts to live with humans. The more time he spends with them, the more human he becomes. There is an incident where he cuts off his finger as a party trick expecting it to grow back, but instead it bleeds, because he is not made of wood any more.

So he starts to live as a human, except he does not age at the same rate and he lives for hundreds of years. Eventually, he becomes an alchemist, although I forget the purpose of his experiments. Finally, after a few hundred years, he walks into his garden and plants himself, and becomes a tree.

Does anyone have any ideas?

In case anyone's interested, this came to mind again and I managed to track it down. It's The Forest of Hours by Kerstin Ekman.

This novel begins in the Middle Ages when Skord, a magical being who is neither man nor animal, finds himself in a forest with no memory, no past and no language. As he observes the behaviour of the human beings he meets in the forest, he begins to gradually understand human civilization and learn their language. Although he can pose as one of them, he is also able to assume the form of animals and cause things to happen simply by willing them. Skord survives for five hundred years and lives many different lives but, despite his learning, he finds it difficult to resist the call of the forest and returns there periodically to rejoin the band of forest outlaws who live outside human society. 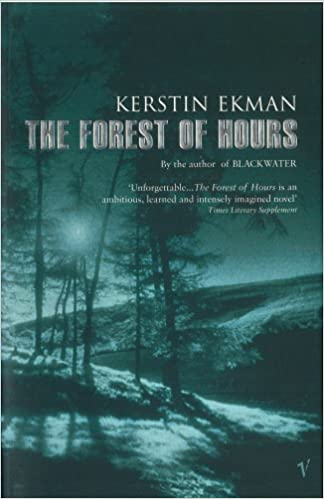 Not the answer you're looking for? Browse other questions tagged story-identification novel magical-creatures or ask your own question.

8
SciFi novel about scientist, terraforming and soldiers
7
What is an "Otik Style" nymph?
7
Weird West novel from the mid-90s
7
two part novel, fantasy, tree people, female protagonist. mysterious antagonist who becomes an ally and her romantic potential
46
Sci fi novel about blue goo inside a man makes him immortal and invulnerable
14
Novel with a hyperspace pilot who goes to supernova party, falls in love with god who becomes a planet
7
Book about a king who becomes immortal
12
Framed and sent to a prison planet, learns to hunt large native creatures
24
Novel about a plague that is released in modern times when an early Christian relic is removed from its receptacle