Who or what is the man with the special headgear in Cloud City?

In The Empire Strikes Back there is a gentleman, presumably working in the administration of the city (maybe Lando's right hand man?) who wears a special headband. What is that? Is he a cyborg? Is it something akin to Geordi's visor in TNG? 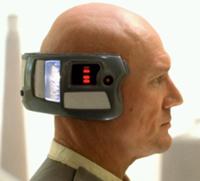 He is Lobot. He was indeed Lando's "right-hand man".

Lobot was a Human male who served as the chief administrative aide to Baron Administrator Lando Calrissian on Cloud City over the planet Bespin. His brain was connected to the city's central computer which allowed him to communicate directly with the city's computer network. In this capacity, he served as the city's first and only computer-liaison officer.

Essentially, he was sentenced to become a cyborg for crimes but when his sentence was up, he chose to continue serving. He assisted Lando during the events of The Empire Strikes Back when Lando repented of his betrayal of Han, Leia, and Chewie, and eventually became Baron-Administrator of Cloud City years later.

I'd encourage you to read the linked Wookieepedia article. He is a fascinating character.

You're thinking of Lobot.

He was Lando's right-hand man and chief administrative aid. His brain was connected to the city's computer network via his own implanted computer.

He was a human, turned cyborg by way of his implants.

42
Is that Luke's hand falling down at the end of The Empire Strikes Back?
25
Is there a script that contains Chewbacca's/Peter Mayhew's dialogue (in English)?
45
Who/what exactly does Darth Vader believe taught Luke between the events of “The Empire Strikes Back” and “Return of the Jedi?”
17
Expecting visitor Luke Skywalker on Dagobah, Yoda was?
7
Does standing or hanging upside down improve one's connection to the Force?
8
How common were cybernetics in Star Wars?
8
Was Lando referring to this event on Cloud City?
11
Prior to Cloud City, did Vader know that Han and Leia were "friends" of Luke?
9
What was Han searching through when he found where Lando was?
4
What is the nature of the relationship between Maz Kanata and Chewbacca?