I'm a film student working on a script on a Star Wars film as a personal project. Without giving too much away, one of the main key parts of the story involves two siblings, the older one was Force-sensitive while the other was not. Their father, a master Physicist, spends his career to make it possible for non-Force users to become Force-sensitive and to further understand how the Force works so it can be used to help the public with advancements in medical, criminology, and social understanding, but more importantly for him, to make his youngest child happy (keeping with the idea of balance with both selfish and noble traits at the same time). Does something like this already exist in Legends or is it impossible?

Also, would the Jedi (about 40 years after Episode VI) reject or accept someone who was not born Force-sensitive? Also would they accept or try to stop an organisation like the one mentioned above?

According to Wookieepedia, yes

Darth Plagueis, a master of midi-chlorian manipulation, lived during the century leading up to the Battle of Naboo. Obsessed with eternal life, Plagueis experimented with ways to cheat death and create new life from the midi-chlorians. Plagueis' experiments in creating life may have succeeded. It was speculated that Plagueis initiated his plans before dying, and according to the Sith Lords, it was Plagueis who influenced the midi-chlorians to conceive Anakin Skywalker. Such was the case of the Reborn and Sith Cultist.

Latent Force-sensitivity could have also been artificially activated or magnified; some members of Palpatine's Dark Side Elite benefited from this process.

I don't think that it is possible for someone who is ABSOLUTELY NOT force sensitive to become force sensitive.
The closest thing I could gather is an incident where low-level force-sensitives were artificially infused with the force to become more powerful.

In the game Jedi Knight II Outcast (story takes place after episode 6) the Dark Jedi Desann uses a Force Nexus called the Valley of the Jedi to create the Reborn - an army of artificially created Force-Users.

Desann, a former student at Luke Skywalker's Jedi Praxeum, was a Dark Jedi allied to, Admiral Galak Fyyar, one of the Imperial Remnant's many warlords. Both were key to the creation of the Reborn—an army of warriors artificially imbued with the Force. They were working for the behalf of Lord Hethrir, a powerful Dark Jedi and founder of an Imperial splinter faction known as the Empire Reborn. 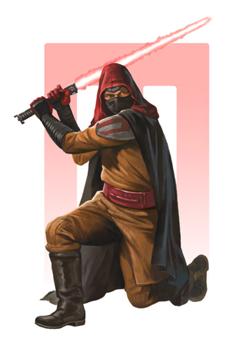 Hethrir had entrusted Desann with training a number of his loyal Empire Youths that were "purified" by a trans-dimensional being called Waru. The Dark Jedi used the Force nexus in the Valley of the Jedi, whose location Desann had tricked Kyle Katarn into revealing, quadrupling their powers with the residue of the ancient Jedi and Sith spirits.


Valley of the Jedi

There, Lord Kaan's thought bomb trapped the souls of over one-hundred Jedi and Sith until they were finally freed by Kyle Katarn.

The Valley of the Jedi then became a concentrated area of Force energy called a Force nexus, and is widely believed to be the most powerful Force nexus in the entire galaxy.

Force nexus is a term used to refer to any location where the Force, or any particular aspect of the Force, was unusually strong.

Yes, it's possible. Aside from the Reborn, Jedi Outcast had the Shadowtroopers, who used crystals in their armor to make them force sensitive, and even more powerful and dangerous than any Reborn. In the sequel, Jedi Academy, there is a scepter that can siphon, store, and release force energy, imbuing ordinary people with it. The effect wore off once the scepter was destroyed, but it's a precedent that force power can be obtained artificially.

I think that this is not possible. At least not at the moment movies are set. Is reasonable to think that if artificial manipulation of the Force through technology were possible it will appear during the original movies.

Maybe the Jedi Council didn't refuses to use that technology and considered it an anathema, but you could bet that the Sith will use it to it's advantage to form great armies.

From my point of view such manipulation, if possible, will be tied to the Dark Side (easier, more seductive,...).

It could be an intheresting twist of the plot having to deal with the Dark source of the manipulation.

Not the answer you're looking for? Browse other questions tagged star-wars star-wars-legends the-force jedi or ask your own question.

48
Are there any Jedi or Sith droids?
2
How is it decided when a child is born with the Force?