How large are the layers of the nine hells in the Forgotten Realms?

I recently read about the structure of the nine hells or 'Baator' in the Forgotten Realms setting. I was wondering how large each of the different layers actually are. I mean, are they endless or are they similar to continents or planets in this plane of existence?

Go with nigh-infinite and for all intents and purposes endless.

This is one of the most complicated topics in most Roleplaying games and in the prose stories of the multiple realities of the Forgotten Realms. Cosmology in the Forgotten Realms postulates that each plane of existence is a nigh-infinite place centered around a central palace or place of power where the supposed ruler of that plane lived.

An older image of the inverted layer cake of Hell can be seen here. Despite the cake-like appearance, each of these planes is a complete and separate universe/continuum with its own magical "laws" and "physics/physical properties". 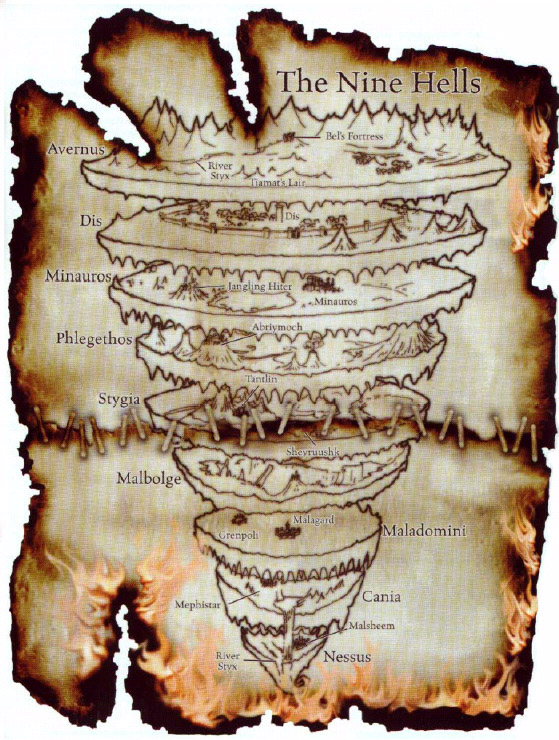 This topic cannot hope to be covered in any depth here, so please frequent the links above for a better understanding of these overall explanations. All of the links are to the Forgotten Realms Wiki which does an adequate job of explaining them in detail.

Not the answer you're looking for? Browse other questions tagged fantasy-genre forgotten-realms or ask your own question.

15
What are the titles of the short stories about Drizzt?
19
What are the origins of “Dwarf Tossing” in fantasy fiction?
22
What is the first instance where Familiars are called Familiars?
5
How many of the seven sisters are still alive?
2
Are there any suggestions to read the 'Forgotten Realms' books?
7
High fantasy book, possibly “Forgotten Realms”, including Leviathan-like undead a necromancer creating experimental undeads
9
Does Conquest's album “Frozen Sky” reference the “Forgotten Realms” books?
50
What is the earliest instance of “Dark Elves” in modern Fantasy?