Were the Sith originally called "The Damned?"

I saw this image recently on a social media site: 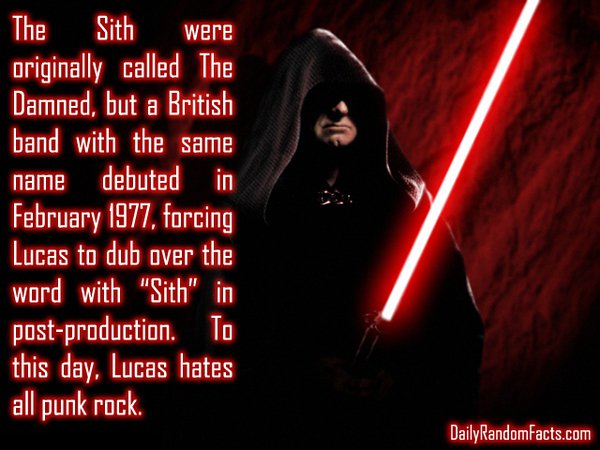 Once I saw it, I started searching. I found several places that made the same claim, almost word-for-word the same, but I never found a site with something solid to back this up.

I thought about popping in the original Star Wars (Yes, I'm old enough to still call the original film by its true name) Blu-ray and look for instances and see if there's any indication of looping or if the lips form "damned" instead of "Sith," but that kind of thing is incredibly hard for me to detect.

Is there any solid evidence to back this up, or is it made up? Were the Sith, in Lucas' original script and during original shooting, called "The Damned?" I find it hard to believe that he'd find the need to go through all the expense for looping over one band that was not known or barely known in the U.S. at all. Also, I notice that in at least the original trilogy that about the only time any "colorful" words are used is when Han says, "Then I'll see you in hell," in The Empire Strikes back. (Which makes me doubt this even more.)

Was the name "Sith" created to allow for re-dubbing over "The Damned?" Is there any good evidence to prove or disprove this?

False. The word "sith" doesn't even appear in the dialog of the first Star Wars movie*, but it does appear in the production notes.

I found a copy of the script online and searched it. The word "sith" appears in five places, all stage notes.

"Damned" appears precisely once, in a well-known quote:

Furthermore, I have found Lucas's first several drafts several places online and the rough, second, third, and fourth draft all refer to sith as "sith", and never "damned".

*: At least in any script I could find online.

It's false. The Damned's first single, New Rose, was released in 1976.

20
How Do Sith Prefer to Recruit?
42
Why was Count Dooku not given the title "Darth"?
72
Has there ever been a good Sith?
66
Are there any known Sith from Yoda's species?
28
What Sith Lords were turned to the Light Side?
23
Was it a crime in the Republic to be a Sith?
7
What is the history of the Sith according to new Disney canon?
5
Was ruling the galaxy a necessary objective for the Sith?
4
Was dual symmetric form especially significant to the Sith?
8
How did Palpatine get the name "Sidious"?