In the Deep Space Nine Episode "Defiant", what was the dispute between Riker & O'Brien?

In DS9 S3E9 "Defiant", Tom Riker (Will Riker's transporter-accident-created twin from TNG S6E24 "Second Chances") comes to DS9 disguised as Will. When he (still in disguise) bumps into Miles O'Brien, the chief greets him warmly, but Riker says, "I have nothing to say to you, O'Brien. You know why."

I have always wondered what this was about. Obviously, if you're impersonating someone whom you don't know very well (Tom Riker having spent eight years entirely alone), you don't want to interact with people well known to the person you're impersonating, because they may catch you out in an inconsistency... so was this simply a way for Tom to get rid of O'Brien, to avoid an awkward situation?

If so then it was foolish on Tom's part, because if there was no dispute, the chief might start to wonder why Riker was snubbing him. So can we assume that Will Riker and the chief had had some falling out and Tom had found out (through intelligence gathering somehow)? If this is so, is it ever explained what this falling out was all about?

I know Riker and Worf had some disagreements over Deanna Troi (either in the "real" universe or some quantum alternative). But I don't remember any problem between the chief and Riker from the TNG series or the movies. Does anyone know?

There was no falling out between William Riker and O'Brien that I know of. Also, had there been, it is unlikely that Thomas Riker would have known of it.

I believe that your first suggestion is correct; that this was a reaction on Thomas' part to avoid a conversation with O'Brien that might bring up things that "William" Riker would be expected to know. O'Brien's surprise to the snub supports this.

I don't believe this was particularly foolish on Thomas' part. A conversation with a close colleague could quickly reveal that something was wrong. The path he took certainly confused O'Brien, but it likely would have taken some time for the confusion to form into suspicion, and Thomas planned (and succeeded) in being gone long before that happened.

Thomas Riker deliberately engineered an argument with Miles O'Brien, the one person on DS9 who could immediately identify him as an imposter.

This is borne out by the shooting script; It's clear that O'Brien has no clue why Riker is so angry at him and he's described as "too shocked to say anything"...

O'Brien takes his head out of the panel and sees Riker. He begins to stand up with a broad smile on his face, but instead of a warm greeting, Riker gives him his coldest and harshest look.

O'BRIEN : Commander. I heard you were aboard, but I hadn't--

RIKER : (harsh) I have nothing to say to you, Chief. And I think you know why.

Riker glares at him and O'Brien is too shocked to say anything in response. There's an awkward silence.

As to whether it was foolish of Tom Riker to try this ruse, the reality is that the deceit only needed to work for a day and it's unlikely that O'Brien would read enough into their encounter to do the serious legwork needed to prove that Thomas Riker was a fraud (such as locating the real Riker and contacting him).

On top of that, the fake Riker could reasonably assume that a career Starfleet veteran like O'Brien would be quite deferential to his superior rank. He clearly has no intention of speaking to him and O'Brien does precisely what would be expected and excuses himself from the Defiant's bridge

Frankly, the bigger (and more inexplicable) risk was that his fake beard would fall off before he could take control of the Defiant, immediately revealing his evil-twin goatee... 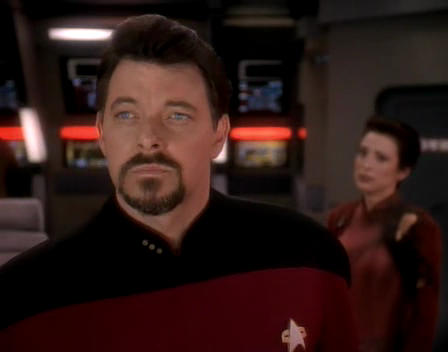 Tom had to act in a harsh way since Miles and Will were such old friends...This way, he would not question Tom at the moment (due to his assumed identity/rank), and by the time Miles got through scratching his head over it, it would've been too late (just as is was).

This always bothered me too, but this is definitely the most logical explanation.

I believe the reason Thomas Riker snubbed Miles O'Brien on DS9 is very simple. O'Brien probably was the transporter chief on the U.S.S. Potemkin whose idea was to create a second confinement beam, which resulted in the duplicate of William Riker. They didn't realize Thomas Riker was created as a result of the transporter accident and he was stranded on Nervala IV for the next eight years, which separated him from Deanna Troi.

True, Riker was obviously posing as his alter ego so there's no way O'Brien could have known it was him. It was irrational for Tom Riker to risk blowing his cover like that, but we already know he was impulsive and reckless.

6
In "Cause and Effect", how did Worf know to go with Data's suggestion?
16
What happens to Thomas Riker?
9
Why didn't the Federation get Picard involved when Gowron pulled out of the Khitomer Accords since he is "Arbiter of Succession?"
10
How did Worf's adoptive father know O'Brien's rank?
30
Did Chief O'Brien go to Starfleet Academy?
16
Is the wordplay between Riker and Guinan original?
4
What other Star Trek series did the main TNG cast show up in?
9
In Star Trek TNG, what is the division of authority between the first officer and operations officer?