How come crews from Red Baron and Pacific Rim are not injured by intense acceleration of humanoid warmachine while piloting from inside?

Neon Genesis 's pilots are positioned closer to center of mass(maybe to stay away from linear and angular accelerations as much as possible) and control capsule is filled with liquid(balancing the forces through fluid pressure?)

The control pods or Conn-Pods where the pilots are hung are designed to hold the pilot with an independent hydraulic system whose goal is to protect the pilots from the external forces the Jaegers are subjected to. 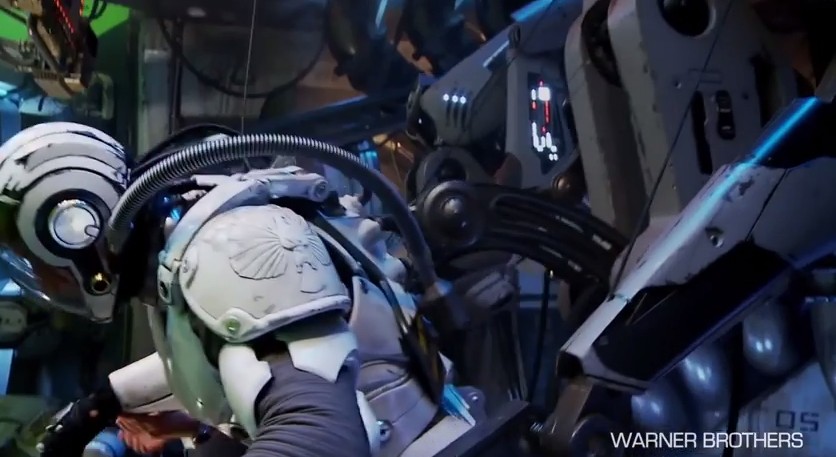 You can see the system connects the pilot to an armature which is supposed to protect the pilot from those forces. It is mounted on the back of the suit and supports the spine, hips and shoulders.

Conn-Pods are traditionally mounted on the shoulders of the Jaeger, furthering their loosely humanoid appearance. This carries over with most Jaegers, such as Gipsy Danger, Crimson Typhoon or Striker Eureka. However, there are exceptions: the Russian Jaeger, Cherno Alpha's Conn-Pod is located in the chest area, as the the space on the shoulders is taken up by the machine's massive power plant.

Realistically, this would likely be a design nightmare, but the movie presupposes this is possible. You can see how this was supposed to be accomplished by looking at the Behind the Scenes videos by the company which designed the control pods, Legacy Effects. I have included the video because I believe it will shed sufficient light on what their intent was.

I would strongly guess that pilots in these stories are not affected by accelerations because the storywriters don't know squat about physics. Or they know and choose to ignore it to make writing easier (to their defense, the audience might not always react well to a physically accurate story).

Also, you cannot absorb acceleration with water. Water is an uncompressible liquid, hence its use in hydraulic systems...

The pilots are suspended via the armature which presumably compensates for sudden jolts and the like. Also, they are not in the head of the Jaeger but in it's torso. So there shouldn't be much motion regardless of what's happening.

Not the answer you're looking for? Browse other questions tagged pacific-rim jaeger or ask your own question.