Does the TOS episode “Tomorrow is Yesterday” feature a primitive replicator?

The Enterprise gets sent back in time to the 1960's, and a couple of time-local people end up on the ship. At one point, a crewman offers one of the passengers food while they are both in the transporter room, and the passenger accepts. The crewman then says "What would you like," and the passenger responds with "chicken soup."

What happened next surprised me. The crewman took out maybe half a dozen of the ubiquitous plastic rectangles, put one in a machine in the wall, waited a few seconds, and took out a bowl of hot chicken soup. I don't think he pressed any buttons, and no verbal command was given. Now, I don't know what the odds are of the passenger asking for one of the six foodstuffs the crewman had at his disposal, or if maybe his verbal request for soup was somehow processed, but no mention is made of where the food came from. So is the machine a replicator?

They aren't replicators, but they are the precursors to replicators. They're called food synthesizers:

The food synthesizer (or food processor) was a common receptacle used aboard 23rd century starships and starbases for synthesizing foods and beverages. An evolution over the older protein resequencer, these food receptacles served as a supplement to the ship's chef and were predecessors to 24th century replicators. Unlike replicators, where food orders were made by voice command -- food orders given to food synthesizers were made by program tapes or cards inserted into a slot.

As seen in And the Children Shall Lead (one card per flavour ice cream), yes, we are meant to believe that the crewman did have a card for "chicken soup" readily available.

As can be seen on the Memory Alpha page for replicators, there is a note that food synthesizers originally weren't as advanced:

The writers guide for the series Star Trek explained that food is prepared in high-speed equipment and moved to a food slot via a small turbo-lift technology, and this is also shown, with no detail, in blueprints of the ship prepared by Franz Joseph in 1974.

They were retconned into something between ENT-era protein resequencers and TNG-era replicators at some point since then.

No, it would be considered an advanced protein resequencer. It was not quite as sophisticated as a food replicator just yet. 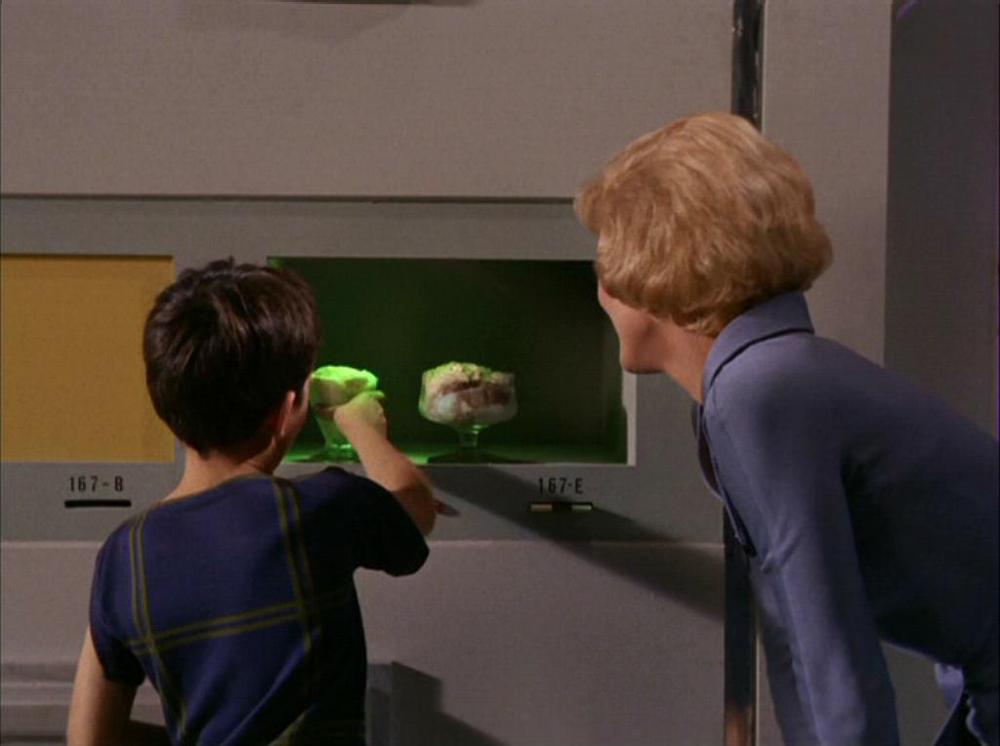 Memory Alpha shares with us:

Not the answer you're looking for? Browse other questions tagged star-trek technology star-trek-tos or ask your own question.

22
Who invented or theorized the replicator?
3
TOS episode - The Changeling, warp 15?
2
Is there a TOS episode where Captain Kirk wears a red shirt?
8
Shouldn't the Deep Space Nine crew now be in TOS episode “Trouble with Tribbles?”
9
Does “The Naked Now” refer to any particular TOS episode?
1
Did they have replicators on Kirk's Enterprise?
12
What consequences were there for Kirk in the TOS episode “A Private Little War”?
2
Star Trek TOS Episode “City on the Edge of Forever”, how many went down to the alien planet?
8
Star Trek TOS episode with obvious stunt double for William Shatner