How did humans get to the planet?

In Episode 15 of Season 2 of Deep Space Nine, "Paradise", how is it that humans got to the other side of the wormhole? The colonists say they were there for 10 years, and

The leader said she found the place months before they arrived to setup the duonetic field.

Yet, they are in the Gamma Quadrant. Was it ever explained how they'd traveled so far?

That is not on the other side of the worm hole. From MemoryAlpha:

While on a reconnaissance mission of star systems near the Bajoran wormhole, O'Brien and Sisko discover human life signs on an uncharted planet. Beaming to the surface, they suddenly discover that a duonetic energy field has disabled all of their electronic devices. They meet Joseph and Vinod, part of a group of colonists who became stranded ten years ago in a similar fashion.

It's established in the script that Sisko and O'Brien are exploring systems close to the wormhole (e.g. rather than through it).

SISKO (V.O.): Station log, Stardate 47573.1. We're getting more and more requests for information about setting up colonies in sectors close to the wormhole. So, Chief O'Brien and I have set out to survey near-by star systems for M-Class planets.

SISKO: It's M-Class all right. One hundred and sixty million kilometers from Orellius Minor. Should be a perfect place to set up a colony...

And while it's not made abundantly clear in the episode that they're on the Alpha Quadrant side, the additional materials provided (the Star Trek Star Charts factbook and the official StarTrek.com Databank) leave no room for interpretation whatsoever. 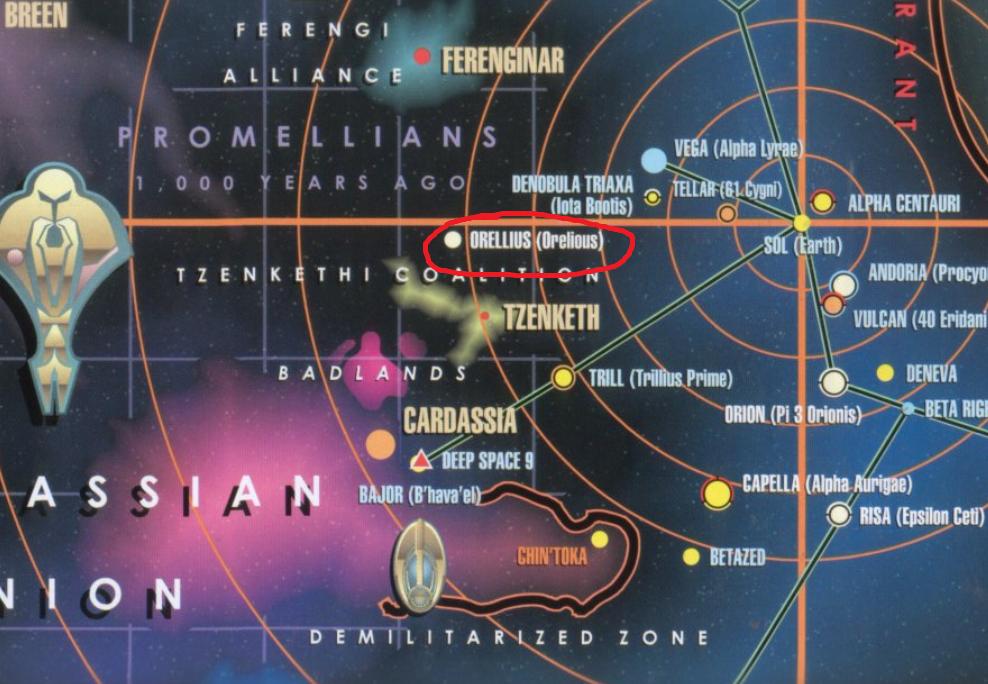 Orellius Minor: Name for an F-type star in Sector 401 -- adjacent to the Bajoran sector -- and its major, Class M world orbiting at 160 million km. The previously unscouted planet is found to host a human colony, led by an idealistic but single- minded opponent of technology who kept Commander Sisko and Chief O'Brien captive until they escaped in 2370.

28
Why exactly were the Pah-wraiths kicked out of the wormhole?
50
Did The Founders evolve from the race that seeded the Alpha Quadrant?
12
Who was in charge of Deep Space Nine during the "The Search"
35
How long would it take the Defiant to travel from DS9 to Earth (or vice versa)?
10
How is the Gamma Quadrant called by its inhabitants?
21
How was Voyager still in the Delta Quadrant at the end of the series?
3
Could the Quadros 1 probe have been launched in 2193?
1
How did Non-Federation powers view environmentalism?
14
Why did it take 10,000 years to discover the Bajoran wormhole?
20
How “old” is Odo?