Did Franklin Roosevelt appear in the Buck Rogers comic strip, as suggested in the quote below? If so, in what issue, or on which date?

From the In Roosevelt History blog:

In March 1944, the publishers of the Buck Rogers in the 25th Century newspaper cartoon strip wrote to FDR asking permission to include a cartoon version of him in an upcoming strip. The proposed storyline had Buck Rogers exploring a new world and discovering a machine that could look back in time and compare good and evil. FDR, of course, was to be an example of humanity’s good, and Hitler and Japan’s Tojo were to be examples of evil. To sweeten the request, the publishers included a membership card making the President a member of the Buck Rogers Rocket Rangers! The White House gave permission for the proposed strip, but unfortunately we don’t know if it ever appeared. 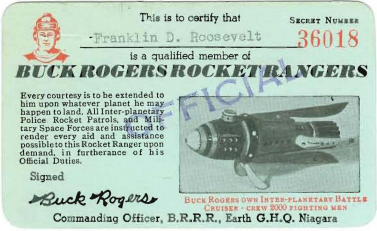 I'm sure this is not much help, but I remember seeing a Buck Rogers strip reprinted years ago which depicted President Roosevelt as the president in the 25th century, and though it did not call him by name, the image was obviously a representation of Roosevelt. He was wearing a jumping belt or jet pack, and the interaction was brief, it was not part of a story line. I remember it because it was an anachronism. The strip never explained why the 25th Century president looked like Roosevelt, and as far as I know, it was a one-off. I don't remember which book I saw it in; it was a random reprint. Sorry for the lack of details, but this image does exist somewhere.

There are no direct references to this comic on the internet, other than the blog post mentioned in the question.

Having said that, the comic in question could be "Monkeymen of Planet X", because it features the Japanese, of whom FDR is meant to contrast. Also this comic was released during the time frame mentioned in the question and blog post. The other mention of the Japanese probably occurred in a comic strip before the permission letter to FDR.

Not the answer you're looking for? Browse other questions tagged buck-rogers or ask your own question.

2
Did the Buck Rogers Serials Follow the Comics?
4
What was the reason Buck Rogers was initially "lost in space" (in deep sleep) in the TV series pilot?
8
Did Buck Rogers Starfighters Have Retracting Wings?
1
Buck Rogers and Starbuck
6
Buck Rogers episode with a "OMG humans ate MEAT!" scene