I'm trying to remember these details from 20+ years ago, so I really have no good recollection of where I encountered this story. I'm pretty sure it was a TV show, but I'm not certain of that.

A young boy lives in a small camp that is surrounded/encased in some type of barrier or wall. He, like all young children in the camp, is told that many years ago there was some disaster that destroyed much of the world, and that the barrier/wall is the only thing that keeps their small camp habitable. No one is allowed to cross the barrier and leave the camp. The young boy's curiosity builds up during the story and, at the end, he decides to cross the barrier. As soon as he does, the camp behind him and all the people vanish and he finds himself in some type of cage in an alien-looking landscape. On the cage is a sign (which we are somehow able to understand) that reads: "Homo Sapiens, last of species".

Anyone have a title and what series this was from?

Perhaps you are thinking of the episode "People Are Alike All Over", from The Twilight Zone?

A rocket piloted by two astronauts heads out on a mission to Mars. One of them, Marcusson, is a positive thinker who believes that people are alike all over, even on the Red Planet. The other astronaut, Conrad, has a more cynical view of human interplanetary nature. The impact of landing on Mars is so severe that Marcusson dies. Now alone, Conrad is consumed by fear when he hears a rhythmic sound reverberating upon the ship's hull. Expecting some unnameable evil, he finds his apprehension turning to joy when, upon opening the hatch, he sees Martians that indeed appear human, have mind-reading abilities and give the impression of being most amicable, especially the beautiful Teenya, who welcomes and reassures him. The hospitable locals lead their honored guest to his residence—an interior living space furnished in the same manner as one on Earth would have been. Conrad briefly relaxes, but soon discovers that his room is windowless and the doors cannot be opened. Momentarily, a wall slides upward, leading to Conrad's realization that he has become a caged exhibit in a Martian zoo. Conrad picks up a sign that says "Earth Creature in his native habitat" and throws it on the floor. In the episode's closing lines, Conrad yells to the heavens, "Marcusson! Marcusson, you were right! People are alike.... people are alike everywhere!" 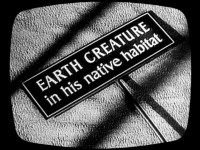 12
A boy (man?) discovers that he is the only real person in his world, which is an alien zoo/museum

7
Which story has the key phrase “Gladly the cross I'd bear?”
9
Fantasy story about Neanderthals having moon magic
19
Man vs. Alien from an old anthology
9
Sci-Fi movie about a shapeshifter
7
Book series where magic system involves building metal things (animals)-one of them can fly and drop orb like bombs
13
Short Story involving time travel, origin of man, and an ancient enemy
7
Human evolution SF short story, investigation about shoplifting reveals both investigator and thief can go unnoticed by Homo sapiens