How can Amadeus Cho use Hercules' mace without superhuman strength?

I have been catching up on the Prince of Power series of stories featuring Amadeus Cho and Hercules. I understand Amadeus Cho is supposed to be superhumanly intelligent, giving him the ability to think his way out of most of his problems. Supposedly the seventh smartest Human on Earth, but this does not mean he automatically comes with superhuman agility as well. 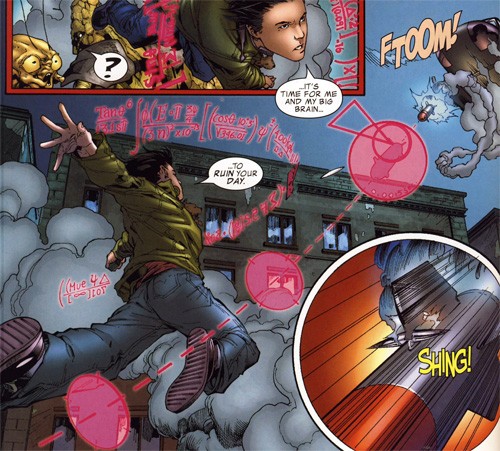 You're making a wrong assumption here: unbreakable, strong or being an effective weapon doesn't necessarily mean something is heavy, especially when you consider extreme differences in applied force.

For example, look at historical Japan: they used paper to make armors, which were indeed effective versus arrows (something you wouldn't believe when looking at some paper sheets).

But back to weapons: When talking about physical damage, you're always going to measure impact force, or more specifically the kinetic energy of the weapon in motion.

How to calculate kinetic energy?

As you see in the formula, mass (m) is only one deciding factor. Indeed, velocity (v) has far bigger influence:

How to accelerate something? By applying force (i.e. what Thor, Hercules, Amadeus, or whoever do). I'm sure it's save to assume that those guys will be able to apply different amounts of force, which also explains why the weapon obviously gains strength just by being wielded by one of them.

If you want a simple example for this: Take a bullet for a pistol. Throwing it at someone by hand won't do any harm (maybe if you hit their eye or something...). But if you apply greater (i.e. non-human) strength to it by using an actual pistol, you can kill people with it, despite the bullet being very, very light in comparison to other weapons or ammo.

Calculating the actual impact is something completely different (which will also consider things like weight, how brittle something is, etc.). But again, just because something is very durable doesn't necessarily mean it's heavy; think of modern stuff like race cars made of carbon.

As for the actual "agility" part of the question: Well, I guess it's just that classic "hero can do it all" approach - sadly.

Judging your image above, it looks to me as if the artist wanted the reader to see this as a "simple" process:

Amadeus calculates the correct angle to swing as well as the proper velocity vector while swinging (therefore there's that formula stretched around him as well as the "estimated flight path" being visible).

While I could believe this, considering he's obviously some genius, there's one problem here: Hand/eye coordination or more specifically practice. Knowing the correct angle and velocity to throw something is one thing, but actually applying it is something completely different. Something like that usually requires lots and lots of training and even then results might not be that accurate. Think of athletes throwing hammers or spears: It's trivial to calculate the perfect angle to throw something, also adding the perfect velocity if you want to hit some specific spot, but whether they achieve it is some different question.

The Golden Mace of Hercules is never stated to be heavy. Nor does it require "worthiness" or some other attribute like Mjolnir does. Rather, the mace is simply an indestructible weapon. According to Greek mythology, the armor & weapons forged by Hephaestus were deceptively light, so we can probably assume the same for the mace.

Since the mace has been used by Cho on more than one occasion, we must assume that it requires no special strength requirement to lift. In fact, it could be said that what makes the weapon so deadly in the hands of Hercules is his own augmented strength. As an example, let's take a regular baseball bat - something that anyone can lift and use. Now make the bat indestructible. Now put it in the hands of someone with 100x the strength of a normal man. Ouch.

As for Cho's ability to use the mace WELL, that can be attributed to his unique abilities. Cho can predict trajectories & mass on the fly, thus allowing him to use the indestructible mace to its utmost effect without any increased strength.

Odin's hammer (it's not Thor's Hammer) wasn't heavy, it simply cannot be lifted without Odin's blessing. Thor can lift it because he had or has Odin's blessing. Without it, even Thor cannot pick it up.

Regarding Hercules' Golden Mace, just because a material is super hard, doesn't necessarily make it dense or heavy. Adamantine (which is a fictional substance) is supposed to be very light despite it's hardness.

Yes being light means Hercules doesn't need to heft it with all his might, but lets be a little practical here, even big strong dudes can fight with light weapons.

As regards the accuracy, I believe the implication is that he's doing the millions of calculations per second to constantly adjust his actions to correct for environmental and physical factors to be able to reduce things down to a simple mathematical problem to allow for proper targeting. In essence, he's brute-forcing the problem to bypass not having years of physical muscle memory and practice.

As regards being able to move the mace itself, it's a simple matter of handwaved "momentum". It's a fairly common thing to run into in Anime in my experience, where someone is wielding an item that is too large for them to feasibly move and the explanation is given that they're able to compensate for the weight by "keeping the item balanced in motion", allowing a small force applied over a longer amount of time to impart a greater force. It's got some basis in reality — if you keep pushing a heavy weight across a floor, you can get it going faster than if you tried punching it, and the "hammer throw" sports event is based off of the idea of imparting momentum over a longer period of time — but it ignores two important factors of static friction and the material strength of the human body.

The first is simple. It takes a certain amount of force to start an item moving and if you can't get that first bit of force going, it's not going to budge. Ever tried to push something heavy and all you manage to do is have your shoes slip on the floor? That's because the force you're putting in is insufficient to overcome the static friction of the heavy object, so it instead gets routed into overcoming the static friction of your shoes. Your shoes get some dynamic friction, the force which opposes further movement of your body, but it's still not enough. Similarly, for a sufficiently heavy object, Amadeus is not going to be able to budge it. That said, as long as we're handwaving his "hypermind" accuracy, you can similarly imagine that he's finding ways to apply some small force to the object to reduce this coefficient of static friction. For a real-world example, if you can tilt that heavy object, and get it up on an edge, the static friction decreases as a function of surface area, making the object easier to pull.

The more difficult factor to overcome is the material strength of the human body. If you can apply a straight-line force, particularly when pushing, you can leverage the impressive compressive strength of human bones. Pulling on a straight line allows less power because you're limited by the tensile strength of the muscles and tendons connecting your joints. If you've ever hyper-extended a limb, you'll know how easily that can be overcome. If you have an object moving outside of a straight line, you suddenly have a host of other forces coming in at different angles, making the problem of using the most stable angles all the more difficult, and requiring that effort just to maintain the system in balance. Witness how someone participating in the hammer throw event will get exhausted if they just keep spinning in place because they have to exert effort to maintain their balance and continue the force.

So, in short, Amadeus Cho's feat of being able to lift, move, and throw objects such as the mace are improbable, but not entirely impossible, particularly as he is supposed to be able to think at such an accelerated speed to fully maximize his capabilities. In the real world, he'd likely only be able to do it once or twice before getting sidelined by all of the small injuries he'd be inflicting on his muscles, bones, and joints (all the worse for him because he's still growing, which means there's a good chance he'd be causing permanent damage to developing structures), but this is the comic books, a world where you can fall off of roofs, break bones, lose your spleen, and still be in fighting form a week later, c.f. the Batman family, so in a comic book world, I see his feats as plausible.

Not the answer you're looking for? Browse other questions tagged marvel hercules amadeus-cho prince-of-power or ask your own question.

23
How long can Tony Stark survive without his chest piece?
38
How does Thor's flight work exactly?
7
Can Tony Stark use Iron Man suits without an Arc Reactor?
22
How can Captain America survive a skydive without a parachute?
12
How can Quicksilver run with someone without injuring them?
11
How can Wolverine speak without a body?
19
How can Hank shrink without his Ant-Man suit?
1
Do Asgardians get sick?
45
How did Thanos beat Hulk so easily?