In the BSG episode Water, how does losing 60% of the water cause such a crisis?

I'm starting the new BSG series again, and just finished the early episode "Water". They mentioned that they have enough water to last for years. Shortly afterward, they lose 60% of the water, and suddenly they only have a few days of water left.

I'm sure there's some logic behind this having to do with their recycling process, but I must have missed it again - I had the same question when I first watched the episode.

The numbers in the episode are:

This isn't enough information to figure out exactly what the situation was, but numbers can be found that fit, for example (these aren't the only ones possible, but they do to demonstrate):

Before the explosion, we see that there's no danger of hitting the minimum level required (after several years the small amount lost to the not-quite-100% process and supporting the other ships would drop the level down to dangerous levels). 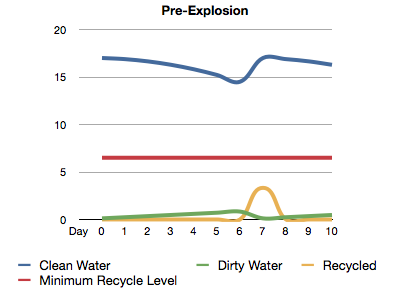 After the explosion, supporting the other ships, we see we're dead after 2 days, because we cannot recycle. (There's a month of water left, but no way to get more cleaned, and they were having a lot of difficulty finding new sources at this point). 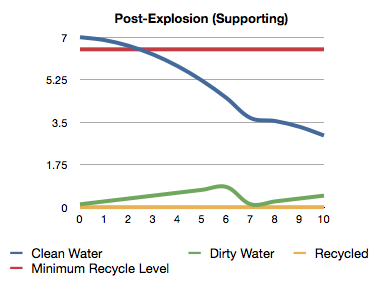 After the explosion, not supporting the other ships, we see we're dead after 6 days. 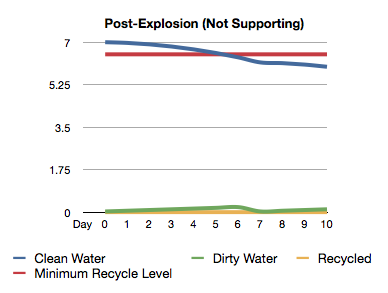 With efficient recycling you can get by with a little more (there will always be some loss — and retention as well; quoting a different SF series, carbon-based life is "ugly bags of mostly water") than just enough water to keep people, animals, plants, etc. alive for several days; you need long enough for enough of the water consumed to get back into the ecosystem and be recycled. Lose enough water, though, and you could easily get into a situation where you don't have enough water for all necessities over the period needed for that water to get back through recycling — and water is more critical than food; you can if necessary go a week or so without food, but only a couple days without water. And many plants are more sensitive than humans.

In a planetary ecosystem, you can do so; in an artificial ecosystem you run into a lot of things you need that you don't normally need to worry about (humidity, for one; if you don't maintain a certain minimum amount of atmospheric moisture, everyone/everything will need much more water than usual due to the severe evaporative water loss). And those plants you let die off might lead to knock-on hunger, or worse knock-on scurvy or the like. Artificial ecosystems have very little margin for error; there are many complex interactions, and even small imbalances can have severe knock-on results.

40% of the water supply not being enough is believable for a large, complex ecosystem.

21
In Battlestar Galactica, how does the newly re-imagined series relate to the original?
14
Where was the last episode of BSG filmed?
6
How do the colonials have such advanced space travel?
10
Can anyone explain to me how the supernova in BSG was supposed to help the Colonials?
5
Why was the compromised ship last to jump in episode 1 of BSG?
13
How does the Galactica survive so much hammering
10
Why do they even bother sending out fighters in the first episodes of Battlestar Galactica?
17
Battlestar galactica , episode "33" - why can't they just take sleep shifts?
7
How do ships in the BSG universe calculate their position in the galaxy?