What exactly did Aberforth Dumbledore do to the goats?

I remember in the last HP, there was something to the effect that Aberforth had been arrested for doing something with goats. Something like "using inappropriate charms on a goat."

What could he do to warrant arrest? It can't be what I think it is, can it?

From the Leaky Cauldron:

J. K. Rowling was asked in 2007 what exactly Aberforth did to the goat to be prosecuted. Below is a transcript of the interview:
Q: In the Goblet of Fire Dumbledore said his brother was prosecuted for practicing inappropriate charms [JKR buries her head, to laughter] on a goat; what were the inappropriate charms he was practicing on that goat?
JKR: How old are you?
Eight.
JKR: I think that he was trying to make a goat that was easy to keep clean [laughter], curly horns. That's a joke that works on a couple of levels. I really like Aberforth and his goats. But you know Aberforth having this strange fondness for goats if you've read book seven, came in really useful to Harry, later on, because a goat, a stag, you know. If you're a stupid Death Eater, what's the difference. So, that is my answer to YOU.

Other than that...We don't know.

He had a "goat fetish" but "wasn't really in love with them".

From a letter that Rowling wrote to a fan in 2008 which recently was partially posted online: 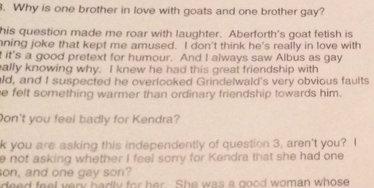 3. Why is one brother in love with goats and the other brother gay?
This question made me roar with laughter. Aberforth's goat fetish is [?a ru]nning joke that kept me amused. I don't think he's really in love with [?them, but] it's a good pretext for humor. And I always saw Albus as gay without really knowing why. I knew he had this great freindship with [?Grindelw]ald, and I suspected he overlooked Grindelwald's very obvious faults [??because h]e felt something warmer than ordinary friendship towards him.
4. Don't you feel badly for Kendra?
[?I thin]k you are asking this independently of question 3, aren't you? I [?hope you'r]e not asking whether I feel sorry for Kendra that she had one [??????] son, and one gay son?

20
Did Dumbledore ever trust Hagrid with his life?
15
What was in the letter to the Dursleys Dumbledore left with baby Harry?
6
How did Aberforth Dumbledore know to send a house-elf to help Harry at Malfoy Manor?
13
How did Aberforth Dumbledore know to send Dobby to help Harry at Malfoy Manor?
42
What is the basis for Harry to call Dumbledore the "best teacher"?
17
How many times has Dumbledore outright lied to Harry (or anyone)?
3
How exactly does a wand work and what affects its performance?
12
Can Aberforth read?
3
Why did Dumbledore let Snape tell what he heard to Voldemort?
4
Why did the protections on The Burrow fail so quickly? How did the guests instantly know that they had?