Short Stories about the big crunch

I am trying to identify a book of short stories. The points I remember are:

Other Relevant Info and Chronology

The girl is featured on the cover, with her arms outspread. Not a lot to go on, but I read the story 15 years ago and can't remember any more.

The Jaunt - Steven King 1981 published in The Twilight Zone Magazine

I believe this is the story in question although not every detail matches the authors description.

The telling signs to me are the description of the cover, and the explanation of the character scratching their eyes.

As his family prepares to be "Jaunted" to Mars, Mark entertains his two children by recounting the curious tale of the discovery and history of teleportation. He explains how the scientist who discovered the Jaunt quickly learned that it had a disturbing, inexplicable effect on the mice sent through the two Jaunt portals. The mice would either die instantly or behave erratically before dying moments later. The scientist eventually concluded that they could only survive the "Jaunt effect" while unconscious. That, the father explains, is why all people must undergo general anaesthesia before using the Jaunt.

Mark spares his children the gruesome semi-apocryphal account of the first human to be Jaunted awake, a condemned murderer offered a full pardon for agreeing to the experiment. The man came through and immediately suffered a massive heart attack, living just long enough to utter a single cryptic phrase: "It's eternity in there..."

Mark also doesn't mention that since the inception of the technology, roughly thirty people have Jaunted while conscious, voluntarily or otherwise. Each time, they either died instantly or emerged insane. One woman was even shoved alive into eternal limbo by her husband, stuck between two Jaunt portals. Even though his attorneys attempted to argue that he was not guilty on the grounds that his wife was technically still alive, the implications of that argument only served to secure and hasten his murder conviction and execution.

Mark then reveals the nature of why any conscious being goes insane or dies after being Jaunted. It is theorized that while physically the process occurs nearly instantaneously, to a conscious mind it lasts an eternity. One is simply left alone with their thoughts in an endless field of white for what is suggested to be possibly anywhere from hundreds to billions of years. However, the father is careful in his wording to keep from scaring his family.

After Mark finishes his story, the family is subjected to the sleeping gas and Jaunted to Mars. When Mark wakes, he is first aware of screaming. He finds his inquisitive son Ricky's hair suddenly lengthened and white with shock and cackling like a lunatic. Ricky held his breath while being administered the general anesthesia in order to experience the Jaunt while conscious, and has been rendered completely insane. Ricky confirms the terrible nature of the conscious Jaunt, shrieking "It's longer than you think, Dad! Longer than you think!" Ricky then claws his own eyes out as he is wheeled away from his horrified family by several Jaunt attendants.

Also I looked for a copy of the cover and found the following which alough not an exact to the description, again seemed very in line and strikingly memorable. 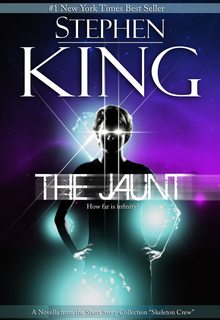 7
Sci Fi Dystopia: people classified by color coded bloodlines
4
Movie where piano player gets robotic hands
14
Story where all statues come to life
18
Name a book of the 80s about a group of scientist/students being transported to a parallel universe
11
Old anime I saw about 15 years ago with transforming characters
11
Fantasy movie which is a collection of stories with "music" theme