What does the blue pill in The Matrix actually do?

During the first meeting between Neo and Morpheus in The Matrix, Morpheus states that if Neo takes the blue pill, "The story ends; you wake up in your bed and believe whatever you want to believe." Does this mean that the blue pill acts as a selective amnesiac? A program to make Neo feel as though he dreamed the meeting, similar to his experience of having a bug implanted by the Agents? Would it include something that makes him no longer of interest to the Agents? Since, technically, all that Neo has to do, if he refuses Morpheus' offer, is get up and leave the room, why have a blue pill at all?

Within the film canon, the precise nature of the "blue-pill" isn't described although we can infer from the quote from Morpheus that it's a sedative;

In the canon Matrix Comic "A life Less Empty", the main character; Tiera took the blue pill. She clearly recalls discussing the nature of the Matrix with Morpheus but then returns to her normal life. The 'splinter' remains in her mind (causing fits of depression and suicidal tendencies) but without any possibility of escape. There's no indication that the pill had any other effect than simply knocking her out. 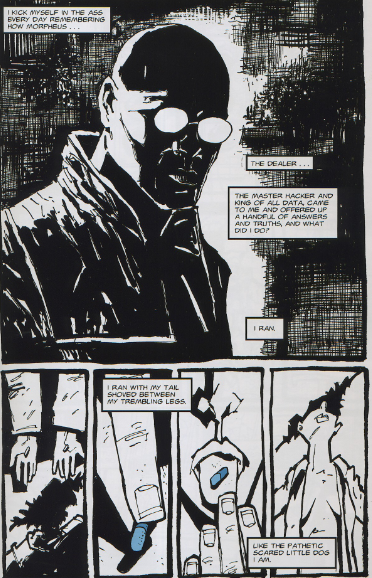 I seem to be in the minority here but I don't think the blue pill itself does anything remarkable. It's a placebo, or possibly an ordinary in-Matrix sedative.

I base this on two things.

First, there is an elegance to it. Why would it be necessary for the blue pill to do anything at all? And if it is just a placebo, it's a perfect symbol for accepting the irreality of the world inside the Matrix. By accepting the blue pill, Neo would be accepting the illusion both of the Matrix and the pill itself. And really, if the pill is going to wipe his memory why doesn't Morpheus say something like "You'll forget all about this"? But that's not what he says.

The second thing that leads me to believe this is Morpheus's statement:

The story ends; you wake up in your bed and believe whatever you want to believe.

Breaking it down, "the story ends" simply because the rebels stop pursuing Neo. The "wake up in your bed" phrase can be interpreted literally (they're going to sedate him and deposit him in his bed) or merely a continuation of the dream metaphor Morpheus is using (the strange things that have been happening will stop).

But the really important thing is "believe whatever you want to believe." As he points out in the next line, Morpheus is offering Neo the truth. More than that, he is giving him a choice between seeing the world as it really is and rejecting the evidence. If Neo takes the blue pill Morpheus will leave him to make his own conclusions about his recent experiences and the world he lives in. Someone who takes the blue pill would probably want to conclude that Morpheus is lying, maybe the whole experience was a trick of memory caused by the blue pill, whatever. They can believe whatever they want to believe. But if their memory is wiped, they don't have the choice to draw their own conclusions, and this is not what Morpheus is offering.

I don't think the pills are really explained in canon anywhere, but using computer science terminology they're rather obvious and easy to explain. I don't pretend to know these were their thoughts behind the whole scene, but it sounds believable to me:

The pills essentially represent bot programs. They can't insert them into Neo (like the Agents do with the squid/bug thingy), because they don't know where he is and they don't have access to him.

However, by taking and eating one of them, he essentially "downloads" it, which causes the included code to be executed (similar to how they inject memories to quickly learn things).

Based on the pill there'd be two "flavors":

I don't believe that the Blue Pill's effects have ever been explicitely explained in official cannon, but from Morpheus's statement I believe that it does indeed make the recepient forget all about the meeting with Morpheus and probably any discoveries they might have made about the Matrix. Remember also that this is the state that Cypher requested from the Machines as part of his payment for betraying Morpheus.

I think the blue pill stands for "ignorance is bliss", as later quoted by Cypher. It's an easy out - Neo wouldn't have to walk away, looking back to see if Trinity was watching him go, or even debating whether to run back and say he's changed his mind. Once he took the blue pill, it was a final decision - he would know that his memories would be intact (i.e. he hadn't been messed with any further), and yet he could be "out" of the current dangerous spot.

The promise of the blue pill is, however, an illusion for Neo, because he'd already been arrested by the Agents, for crimes perpetuated within the Matrix, and thus even if it was for "vengeance", they wouldn't leave him alone after that - they would find a way to use him. It is perhaps this thought that propels Neo towards the red pill, even if his doubts still remain about Morpheus' dialogue.

I think the pills are placebos, and taking one or the other is expressing an irrevocable choice. The pills themselves do nothing; it is all Neo's choice to accept the artificial world of the Matrix or accept an as yet unknown world which transcends it. Morpheus' team begin performing a variety of activities after Neo swallows the pill. One could interpret it as them acting within a limited window of opportunity to locate and recover him - and nothing more. But, but they could also be performing actions to "wake him up" from the "shared dream" of the Matrix. In other words, taking the pill has the same function as marking a ballot or throwing a switch - an apparently physical but entirely symbolic manifestation of making and committing to a choice. Upon seeing that he has committed to a choice, the team sets to work to help him execute it.

To me it's short and dry. Mr. Anderson does not believe in faith. Why? He doesn't like the idea of not having control of his life. Morpheus offering him the blue or red pill gives him control. He has a choice. (Not really.) At least he feels he does. The choice was already made. No matter which pill he chose, his path was already set for him.

Just rewatched this movie again, from what i understood about the pills is that the blue pill would be the architect's perfect equation. If the one accepts the blue pill, it simply means he accepts the matrix world and wouldn't decline it in the future, real world-like perfect matrix.

0
Why was the blue pill necessary to be offered alongside red pill?
56
What would have happened if Neo had taken the red pill and blue pill at the same time?
84
The Matrix: When Neo and Trinity shoot security/police are they actually killing real people?
15
Does either pill actually do anything?
12
What happens to the Matrix if Neo takes the blue pill?
4
Why not sedate the person taking a red pill?
6
How to detect "blue pills"
2
Are there three options with the red pill and blue pill?

8
Was the tracking bug actually inserted into Neos body, or was it a program?
9
What are the limits to the Merovingian's power?
19
When did Morpheus find out the Oracle is a program?
12
What happens to the Matrix if Neo takes the blue pill?
4
Why not sedate the person taking a red pill?
22
Did Total Recall inspire the famous red pill/blue pill scene?