Is it possible to kill a Weeping Angel?

I couldn't find this question on here when I searched so its probably really stupid but:

Surely when an Angel is quantum-locked its literally just stone, so why can you not simply smash it with another rock or a hammer -- surely that would destroy it?

I wouldn't stake my life on how effective a sledgehammer might be. These are creatures the Time Lords, masters of time and space, discoverers of the temporal vortex, and creators of the TARDIS, feared. Officially, there is no word on whether your idea of smashing them with a hammer would work. But no weapon ever deployed against them, in the television series, has ever been seen to be effective.

But we can infer from the interactions we have had with the Doctor and the Angels that they might simply be tougher than they would appear even if they look to be made of stone or a stone-like material. We have also seen them animate, possess or even transfer themselves to other objects and materials such as the Statue of Liberty. (The Angels Take Manhattan) 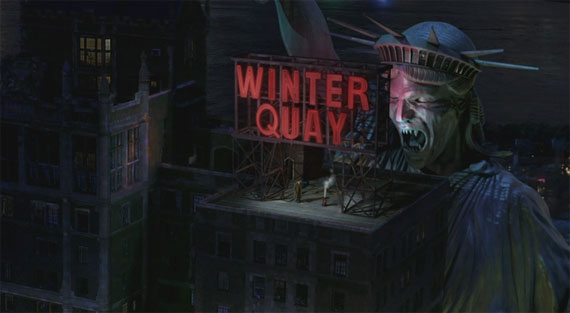 I always wanted to see the Statue of Liberty. Now I will never make that trip...Thanks Dr. Who.

I tend to take the Doctor's reaction to things as a sign of whether you should be a little afraid or a lot. Only a few things have ever made the Doctor hesitate, the Daleks, the Cybermen, the Vashta Nerada and the Weeping Angels are samples of creatures he is happy if he never sees again. I would take the advice of everyone who has survived an encounter with them. Don't blink. Not even for a second. Run as fast as you can.

I am unsure whether it is possible to kill a weeping angel, but there is some way to neutralize them, although what that means (whether to render them harmless or to kill them) is is unknown.

From The Time of Angels:

OCTAVIAN: The Angel, as far as we know, is still trapped in the ship. Our mission is to get inside and neutralise it.
The Doctor Who Transcripts

Octavian and his clerics must have had some idea how to go about this, although that plan was never mentioned. Possibly whatever tool(s) would have been used were on Bob or one of the other clerics killed early on.

Starvation might be a way to kill them, but that would likely take hundreds, if not thousands of years. Again from The Time of Angels:

DOCTOR: Dinner to an Angel. The longer we leave it there, the stronger it will grow. Who built that temple? Are they still around?
RIVER: The Aplans. Indigenous life form. They died out four hundred years ago.
...
DOCTOR: The Aplans. What happened? How did they die out?
RIVER: Nobody knows.
DOCTOR: We know.
OCTAVIAN: They don't look like Angels.
AMY: And they're not fast. You said they were fast. They should have had us by now.
DOCTOR: Look at them. They're dying, losing their form. They must have been down here for centuries, starving.
AMY: Losing their image?
DOCTOR: And their image is their power. Power. Power!
The Doctor Who Transcripts

So we learn that as a Weeping Angel starves its rock form will begin to degrade. After 400 years they still look humanoid but their features are indistinguishable. Presumably this is similar to a human emaciating, getting thin and weak. Whether they would ever actually die or not from starvation is unknown.

I don't believe this is ever addressed in canon, but I think an argument can be made that the statue itself is not the "Weeping Angel." I say this because of the episode where merely seeing the recording of the angel had the same effect as encountering a physical weeping angel. I would theorize that the statues are merely a conveyance of sorts, which is why in the series virtually any statue became one of these creatures, and that the actual malevolent being is a noncorporeal being that uses these vessels to interact with the corporeal world.

River had to jack up her arm to free herself from an angel. If it was that easy to destroy them, she would have just smashed it, instead of hurting herself.Although, this incident was a fixed point in time and River knew that Amy read that River had broken her own wrist to free herself.

8
What exactly happens when a Weeping Angel is quantum locked?