How would have Chakotay sharing his experiences from “Shattered” violate the Temporal Prime Directive?

In Star Trek: Voyager S07E11 "Shattered", the ship is hit by a temporal anomaly, causing different parts of the ship to be in different timelines. When the ship is restored, Janeway asked Chakotay what happened, in which he replies that he cannot tell due to the temporal prime directive.

The entirety of those events were completely reverted and the majority of events didn't affect the current timeline. Why couldn't Chakotay relay his experiences where Janeway would respond with "cool story bro" and leave it at that? He encountered only two future characters, of which he could have easily omitted from the story.

This isn't just a case of telling stories. These are potentialities. Even though, only two characters from the future are shown, the very nature of the event could still at some point in the future, affect Voyager, its mission and the choices of the crew involved. 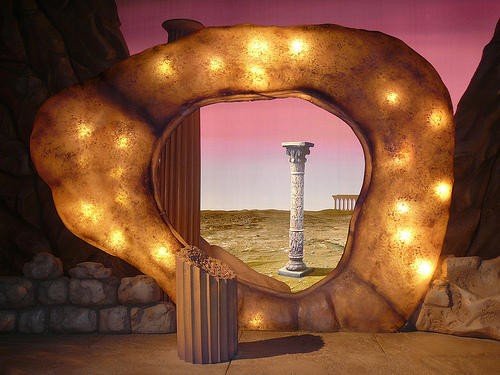 I am the Guardian of Forever. I taught the Federation a valuable lesson. The future could be erased with a careless effort in the right place. That is all.

We are, as watchers of the show, are privy to the knowledge that at the end of season 7, Voyager manages to avoid the casualties which lead to that particular timeline as well as avoiding that particular future all-together.

All Starfleet personnel are strictly forbidden from directly interfering with historical events and are required to maintain the timeline and prevent history from being altered. It also restricts people from telling too much about the future, so as not to cause paradoxes or alter the timeline.

It's your typical "if I tell you anything about the future, I might make a horrible alternate future" sort of deal

Your question is a good one. We know from previous debriefings that revealing information from alternate timelines is generally not considered breaking the Temporal Prime Directive. Not only do we have the episode with Kes--where the information was even considered potentially useful--we also have incidents with Harry Kim and Worf, just to name a few. Even if we argue that he can't talk the part with Icheb and Naomi might not known to be from an alternate timeline, their role is relatively unimportant and can be left out. The rest is definitely an alternate tiimeline--Chakotay knows that none of that ever happened or ever can happen. So it makes no sense that the TPD would prevent him from revealing information.

But is it absolutely necessary that the Temporal Prime Directive is what prevents Chakotay from saying anything? Could not Chakotay have another reason for not telling the story to Janeway? Is there something about what happened that he might not want to let Janeway know about?

I propose that there is: the fact that Janeway had an opportunity to go back and fix her biggest mistake, stranding the two crews in the Delta Quadrant. But then we have the problem I stated before: why couldn't he just keep just that bit of information to himself? Well, he's already had experience trying to do so, and was eventually cajoled by past-Janeway into telling all. Thus it is better to keep the whole thing a secret. The Temporal Prime Directive is something that he's recently dealt with, works as an explanation for him knowing about a future event, and allows him to keep everything he wants to keep secret.

We also get a hint that Janeway may realize this, with her joking use of the concept at the end of the episode. It could easily be her way of letting him know that she knows he's choosing to keep something from her, hence why turnabout is fair play.