Why did Professor X smile before being killed by the Phoenix?

In the scene where Professor X and Magneto go to Jean Grey's house after she woke up and escaped, he says something like

Do not let it control you.

Then, Wolverine manages to open some door, and makes eye contact with Professor X.
Professor X smiles at him, and is killed.

Why the smile? Did it have a deep meaning? Or was it just death acceptance? 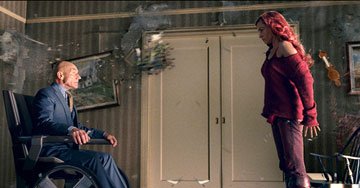 If you watch the extra scene after the credits, Xavier has transferred his consciousness to the body in a coma he was referring to in the ethics class earlier in the film. This was when he asked, would it be ethical for a telepath to take over a body which was born with no mind and so kept in a coma for its entire life.

He is smiling as he has an escape plan.

At the time I took it for acceptance of death, as you say. After seeing the end of the film, however, with the obvious tease that Xavier had placed his mind in the body of a braindead coma patient, I changed my mind. I would assume the smile was actually the closest he could come at the time to informing Logaan that he was not, in fact, about to die. He'd found a way out. Since no fourth film in that series (not counting the prequel film and the upcoming alternate universe movie) was made though, we can't be sure if that actually happened, but it seems to fit.

Days of Future past will bring together "first class" the prequel movie about how Xavier and Magento came to be, and the Original Trilogy of films. Xmen Origins: Wolverine is a prequel as well of the Trilogy, setting up how Wolverine came to be. The movie "The Wolverine" is a sort of sequel to "Last Stand", but a prequel to "Days of Future Past." The latter mentioned is the true sequel to Xmen 3, "Last Stand."

The answer to the smiling, lays in the movie coming, 4th in the main story line, Days of Future Past. How professor X actually remained alive. Basically, it's as everyone said. There was a scene where professor X was lecturing his students regarding mutant ethics, speaks of the ability to transfer human consciousness into the body of a brain dead man in comatose. Mentioning that it raises serious concern (against ethics) even of that transferred consciousness was one of a father of 4, dying of cancer.

I believe professor Xavier was smiling, because the irony of it, was he went against his own ethical nature, and saved is own hide by transferring his consciousness into this patient aforementioned.

The only other possibility is that at some point he had been warned about this... after all if Kitty can time shift people for DOFP it could have happened before if she felt knowledge of his death was important enough to risk someone. Of course then the movie would wipe that out... but if it's not the first time Kitty sent Logan back, for example when she learned she had this power and figured that it was important to warn the Prof of Pheonix... Logan of course wouldn't remember, so the smile might be a thank you... and this would explain more the end scene of the Wolverine where Xavier is in modern time.

More likely is the brother theory...a man in a bed his entire life wouldn't be able to walk any more than Charles could.

Not the answer you're looking for? Browse other questions tagged marvel x-men x-men-cinematic-universe x-men-the-last-stand or ask your own question.

48
How can Professor Xavier be alive?
18
Why is Professor X in a wheelchair in X-Men Days of Future Past’s future/present?

1
Did Wolverine's bones regenerate before being enhanced with Adamantium?
5
Why doesn't professor X influence mind of Trask?
18
Why is Professor X in a wheelchair in X-Men Days of Future Past’s future/present?
8
How did Bryan Singer intend to introduce the Phoenix?
0
How were Professor X, Magneto, Wolverine and Storm surviving the Sentinels?
9
How did Wolverine manage to approach Phoenix?
8
Why was Beast suprised by the cure in X-Men 3?
3
Why was Logan surprised to see Professor X and Storm in the end?
23
Did we ever see Professor Charles Xavier control animals?