On both Star Trek series where he appears, O'Brien's standard coffee order seems to be "black, double sweet." In the TNG episode "Rascals," Keiko even knows that it's his standard order.

This happens four or five times in the episode, including right at the beginning. He never orders coffee this way in any other episode.

Additionally, the plot twist in that episode is that

the O'Brien we're seeing is actually an unknowing duplicate, created to sabotage the peace-talks-of-the-week.

One could suppose that

the duplicate O'Brien has slightly different taste in coffee than the real one, and this is intended to be a subtle clue that he's a duplicate.

Then again, it's also possible that he's just drinking stronger coffee than usual because he spends the entire episode sleep-deprived.

Is there any evidence (in canon, or in creator commentary) that would distinguish between these two theories?

As you've pointed out, we see O'Brien drinking coffee on several occasions, initially on the Enterprise when he asks Keko to get him a coffee then again in the episode 'Babel' (where he orders his own coffee "black, double sweet". We also learn in "Armageddon Game" that he generally drinks in both the morning and afternoon when on duty.

Colm Meaney made the point that in the episode "Whispers" the replicant O'Brien wasn't acting oddly but was in fact acting perfectly normally in response to the odd behaviour of those around him.

This would strongly suggest that his coffee order was nothing out of the ordinary, albeit presumably driven by his desire to remain alert, hence the fact that he's ordered a slightly stronger blend and then made it even stronger.

"In order not to give away what was going on to the audience, we tried to keep him exactly the same, even though it was a different O'Brien. I played it exactly the way I usually do. It was only the circumstances around him that were weird and gave you the feeling that something else was going on." 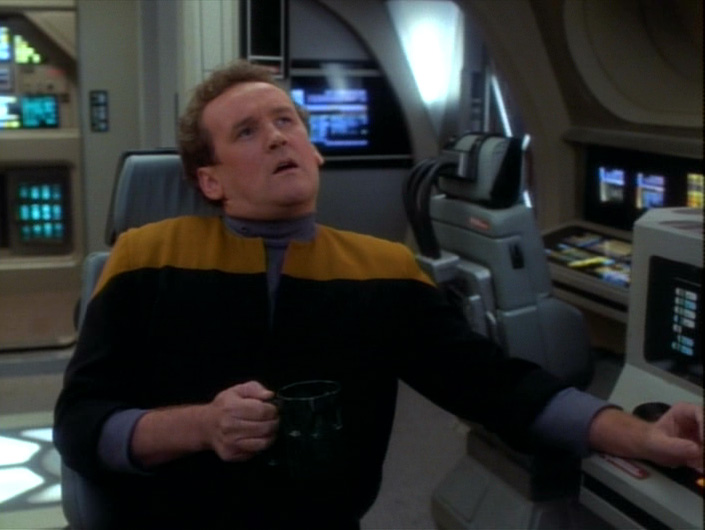 15
What is O'Brien's 'double strong' coffee?

17
Aside from the “Vulcan Salute”, have Nimoy & Shatner's Jewish heritage had any significant influence on Star Trek?
53
Why is Chief O'Brien's rank so low when he is the senior engineer of Deep Space 9?
5
Do we ever hear from O'Brien's 'dog' again?
6
What species is Vilix'pran and what do we know about him?
10
How did Worf's adoptive father know O'Brien's rank?
12
What must a Klingon master do in order to be considered a Dahar Master?
3
What were the reasons for all the differences between production order and original broadcast order for ST:TOS episodes?
15
What is O'Brien's 'double strong' coffee?
8
Does B4's Name Have A Significant Meaning?
7
What is Miles O'Brien's rank in the pilot episode?