How do people exit an airlock from the Defiant to DS9?

Okay, so this has been something that has bothered me for a long time. Whenever anyone enters or leaves the Defiant, they do so through an airlock. Yet, when you look at how the Defiant docks, it doesn't make sense. Here she is docked: 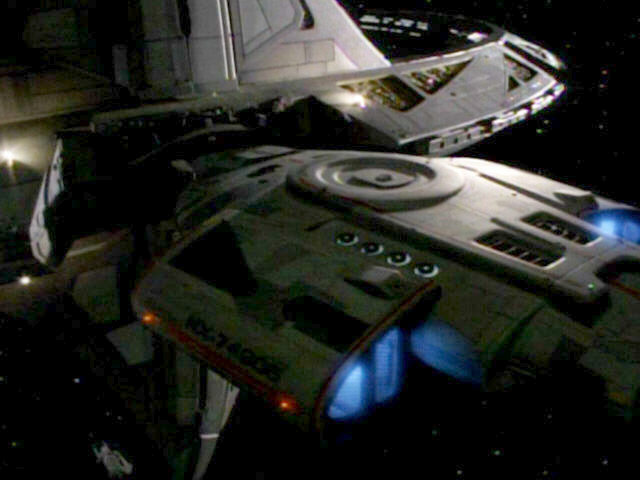 So, how do they exit through something that looks like a forward nacelle?

Okay, let me preface my answer with my own military experience. You may thinking about this too literally. They would not have to necessarily be using the deflector array as an exit. They could be leaving via a number of means you may not consider on the face of thinking about it.

Starships need exits, lots of them

You aren't the only person with Defiant technical issues:

Here is a quote from a Star Trek fan-site, I respect, Ex Astria Scientia and in this case agree with after reviewing dozens of official schematics as well as fan-generated ones:

It is hard to believe and hard to accept that there are no reliable technical specs on the Defiant, unquestionably one of the most popular starships in the Star Trek Universe. It is most unsettling that not even the ship's size is certain. Depending on what is taken as a reference, its length seems to vary between less than 50m and close to 200m. This means an uncertainty of 400% for the length and even 6400% for the volume! Since the DS9 Technical Manual with seemingly accurate deck layouts was released in 1998, the confusion is complete, for the plans conflict with the numerical size figures in the same book.

In addition to the size dilemma, there are a number of problems like the uncertain armament, the location of the impulse engines, the existence of a landing gear or the registry number of the new Defiant (ex-São Paulo NCC-75633).

Using the image below they are leaving via the forward docking airlock which appears to be on the same deck or above what is labeled as the mess hall in the forward part of the ship above the deflector array. In my experience, this makes perfectly good sense and seems reasonable for a ship of this size. There should be several other easy access portals including the cargo bays, the shuttle bay hanger, the warp core section and engineering sections of the ship, the port and starboard nacelles as well as any weapon control point.

I think you're misunderstanding the scale of the vessel. From the available diagrams, it's quite clear that there is more than one level to the ship, and most diagrams have the main airlocks and hatches located on the 3rd deck: 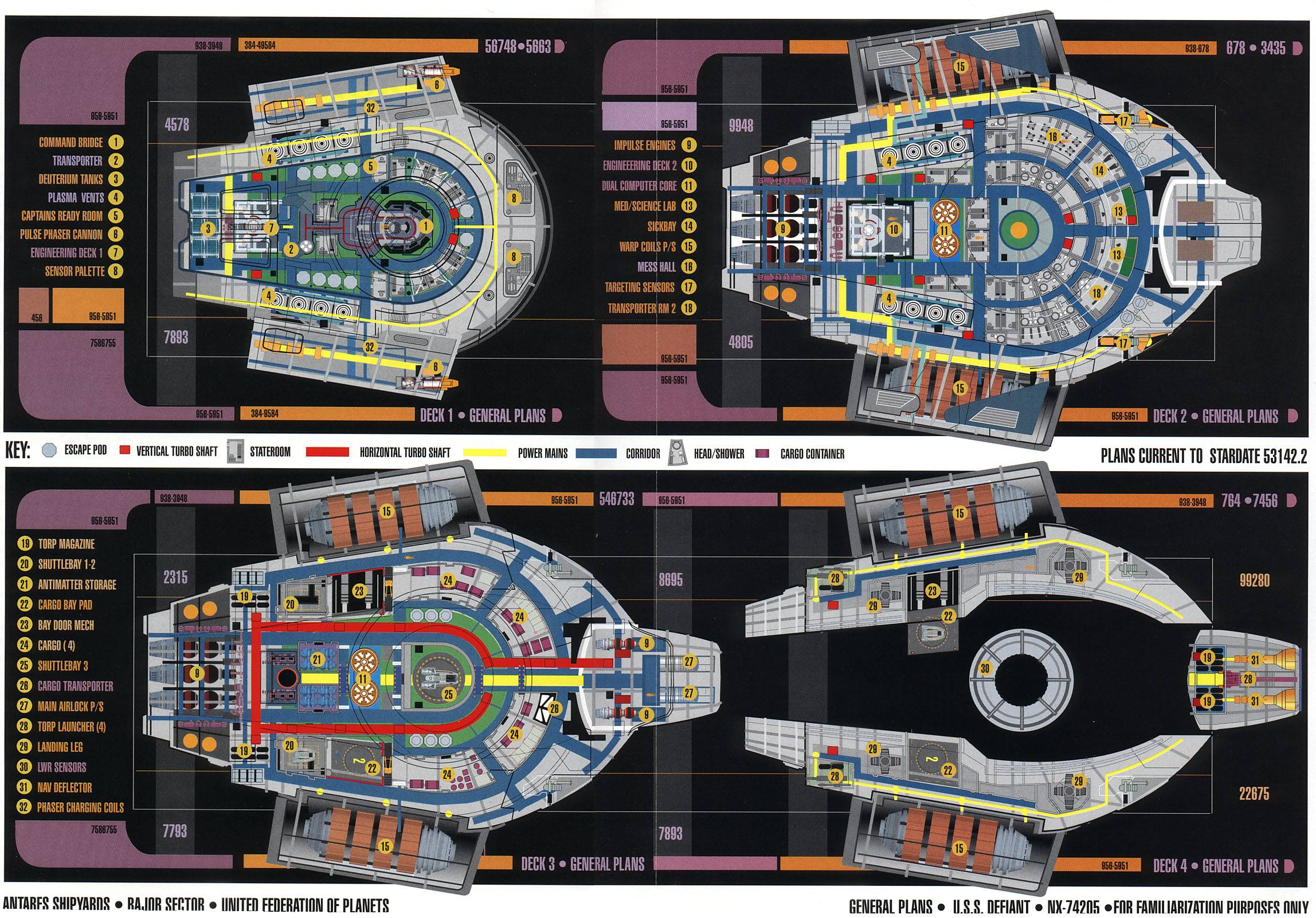 (Above in the bottom left image of the third deck, the two channels labeled "27" are the main airlocks. The navigational deflector is one deck below.)

The nav deflector at the bottom of the duck bill (on the 4th deck) doesn't pose a problem for the airlocks and main docking hatches above it, as you can see from this shot of the exterior: 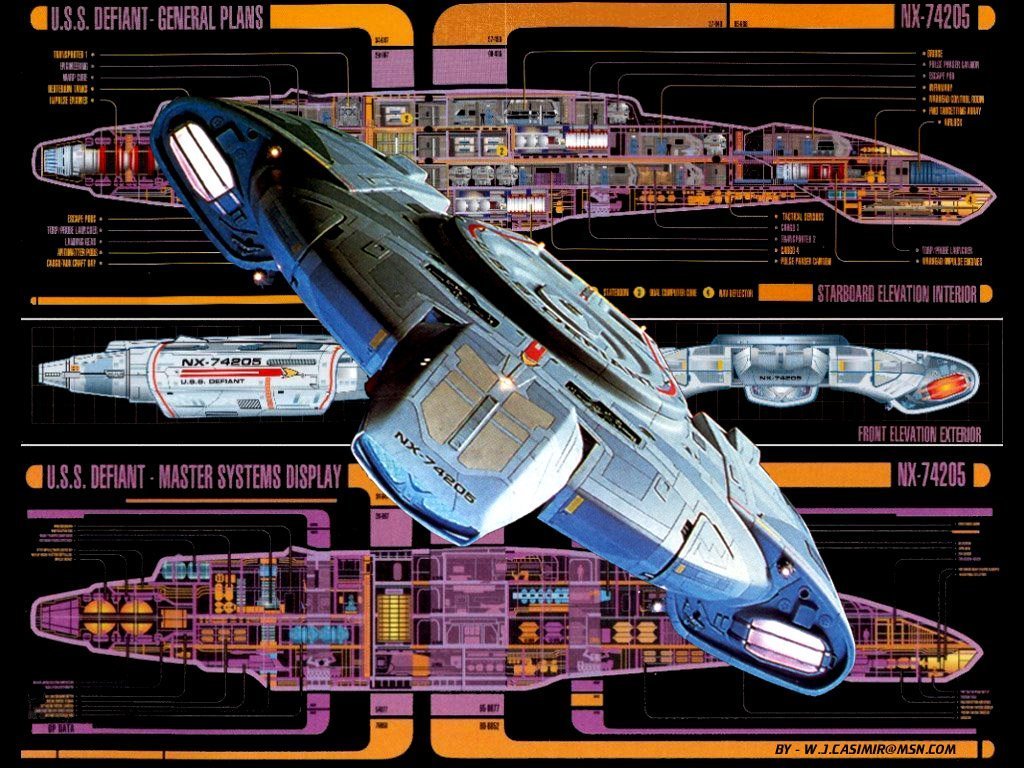 TL;DR: Although it's not normally visible, there is an airlock exit on the front "bill" of the ship.

Despite how it may look, the front protrusion of the USS Defiant is only three (3) decks tall. The upper deck contains an airlock, which is what the crew use to board or exit the ship via DS9. The airlock hatch is fairly seamless from the outside, and therefore isn't normally visible when looking at external views of the ship. However, it is clearly visible on internal schematics: 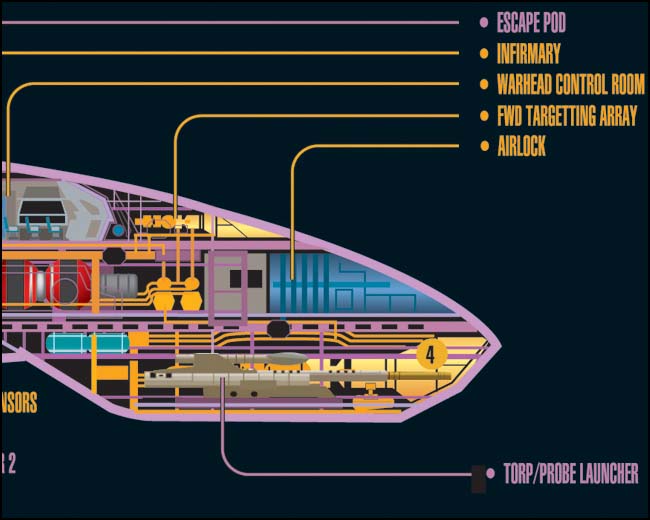 As you can see from the image, the airlock is located ABOVE both the main deflector dish (the blue area visible on the front of the ship) as well as the forward torpedo launchers.

Just below the main deflector dish, there is a very, very small airlock, which is where it would dock at Deep Space 9. I found a detailed 3D version of the ship, which someone created in SketchUp, which shows this airlock. The picture below shows the airlock, surrounded by the deflector dish itself. Although, after resizing the model to actual size, one would have to crawl on all fours to get in and out of the ship, which seems to be the only way in and out, unless you are using transporter or shuttlecraft. The airlock is there, but it is not to scale to the rest of the ship. 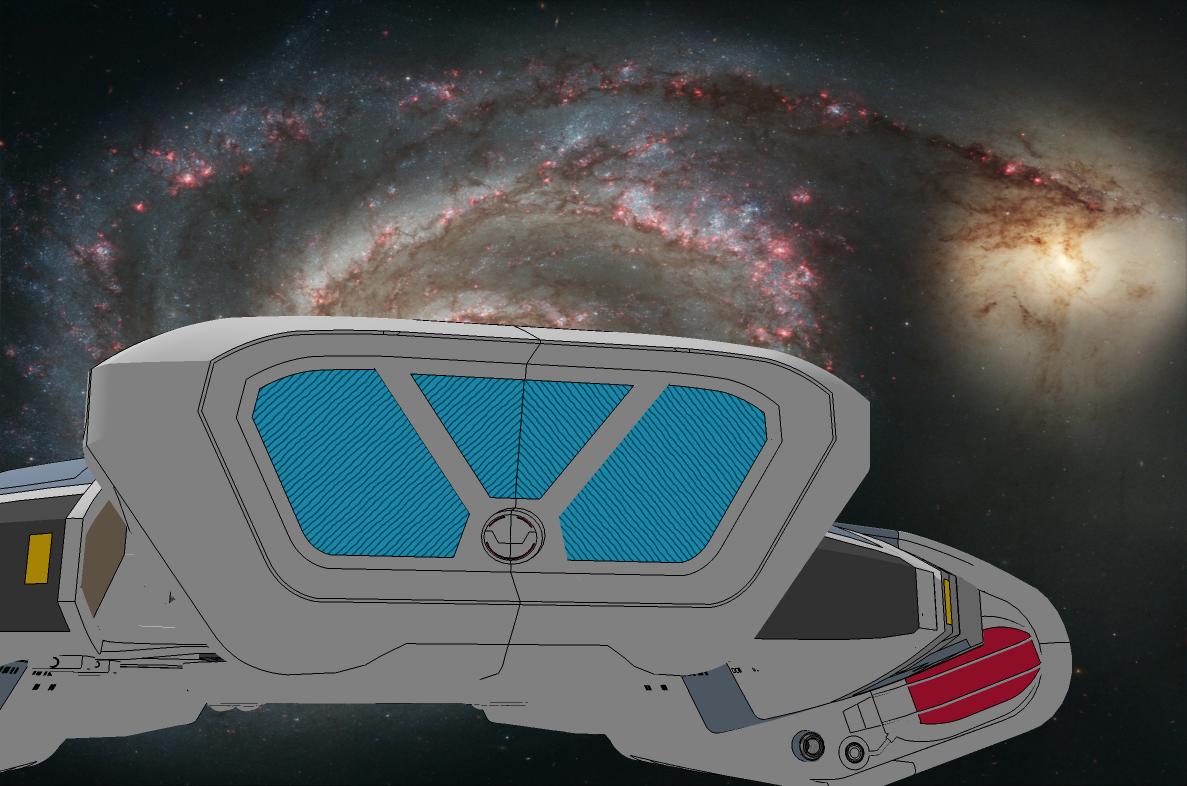 this is a snippet from the cydonia 6 defiant deckplans, which gives a plausable working theory for the entrance and exit through the front main deflector area. the original plans and description cna be found here http://www.cygnus-x1.net/links/lcars/cyd-defiant.php 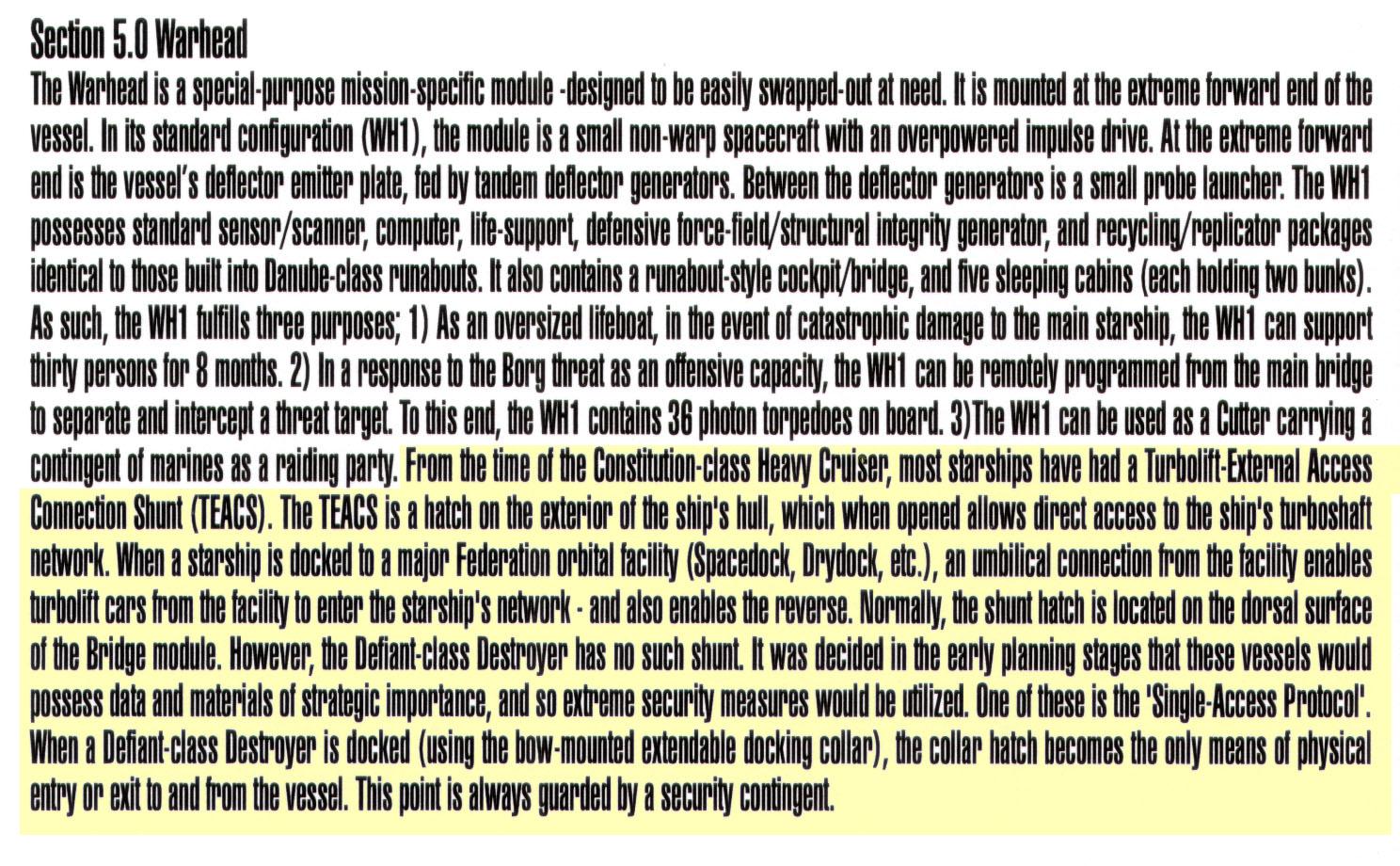 According to the deck plans I found online I have found that on deck 3 there clearly labeled "Telescoping Docking Port/collar" at the nose of the Defiant. My only conclusion is that just above the deflector dish (Dorsal side) there are two gold rectangular shapes that I believe are doors that will hinge up when docked, then one of the telescoping docking ports will extend to the space stations airlock allowing the crew to disembark. I hope this helps.

The four massive phaser cannons are mounted above and below the warp engine sponsons ,they bleed high particle energized pulses off the warp engines and fire them.Lots of energy,radiation and power, Human crewmen constantly adjust maintain the these cannons.In the show they show parts of them as they wear out and are replaced.

ALso in the dorsal and ventral(top/bottom) of the hull behind the bridge/shuttle bay hanger are two separate standard phaser arrays.(standard beams) to provide firepower to cover the angles of the ship.

There are two rear mounted torpedo launchers rounding out the warship design.

It is but a five deck little but power ship.

35
Why can some holodeck matter leave the holodeck, while other holodeck matter (notably people) cannot?
34
How long would it take the Defiant to travel from DS9 to Earth (or vice versa)?
4
How did they find Captain Sisko at the end of the DS9 episode “Waltz?”
8
Is it possible to detect a cloaked ship?
38
From the bridge why can you see another ship in space, shouldn't there be no light?
15
Does the ghost ship from Star Trek: Voyager appear in Enterprise?
13
How many people could fit inside a holodeck and not destroy the illusion?
72
Exactly when did Captain Picard perform his trick on Moriarty in “Ship in a Bottle”?
2
Differences between Enterprise and Defiant in DSC