Series with a book called Quest, about a sisterhood

I'm looking to identify a series. I believe there was about 5 books in the series. I recall that one was named "Quest" and the author was "Shannon Kay", however my search is yielding nothing on those terms. The book had a green cover.

I think the series was named after the number of sub-nations in the word. Something like "12 duchies". There are 3 continents. The main one with the human nation. There is another populated by sentient dray-lizards. The drey-lizards in the human land pull the wagons of merchants. Sometimes they decide to take the merchants back to their land. Where they can never leave, this happens to the main characters - but of course they manage to leave. The 3rd continent is never explored and at the end of the series the character's speculate on what amazing things might be there.

The main character is female, and she is sent off to join a priestess-hood. Called the sisters. They pray to a Brother. They have roughly medieval tech.

Watching from above a in a spaceship is people humans from a scifi world - explorers. monitoring the world for study. One of them comes down to the world and is adopted by the sisterhood. They call him the "Little Brother"

Each of the priestesses has some form of gift. One of the main characters, is the leader. Her gift is longevity, and she has extra magical strength in her old age, in the years leading up to her death.

The sisterhoods enemy is a new cult that has sprung up, worshipping some kinda of Shadow god. Perhaps called the Snake. In one of the later books the Shadow god turns another of the space farers in to its "avatar". 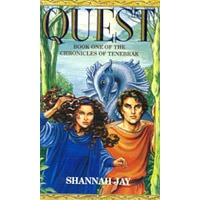 Basically so many things that were almost correct, but put together they were far enough off that searching didn't work.

I ended up finding it at a Free Books table at a convention I was at on the weekend. When I saw it, is picked it up and yelled: "Ahah! I'm not mad. It is real." Which seemed to have the opposite of the intended effect.

This is probably not what you are looking for, but as the description of the story has similarities and the last book in the story is called Quest for the White Witch I'll offer The Birthgrave Trilogy by Tanith Lee.

Edit: this link gives a better summary of the story