1980s book about a man who glows green, and can use magic based upon how long his mom was in labor?

I used to be part of a sci/fantasy book club and I remember getting a compilation of the years best sci/fi-fantasy.

One of the stories revolved around a young man who worked in a toy shop? and he would be “summoned” to kill people for revenge. When he was summoned he glowed green? I remember the main focus of the story was your personal magic was based upon how long your mom was in labor with you. And the magicians kept his mom in labor for months in order to make him practically invincible.

I really enjoyed the story and would really like to read it again. It was over thirty years ago, so hopefully someone can help. Thanks.

This is the Liavek: City of Luck series. It was one of the shared world concept books, where various authors wrote short stories set in it. Your birthday was your time of luck, and the longer your mother was in labour, the luckier you were. A wizard could invest his luck into magic.

The series was edited by Emma Bull, and Will Shetterly. There were five books in the series, and one collecting one of the author's short stories with a new one. The first one was published in 1985.

My personal favourite bit was the god who had been turned into a chipmunk.

In Green is the Color, Quard is the owner of the toy shop. His mother was magically kept in labor for 12 days, making his "luck time" long and very powerful. He would be compelled to assassinate people and appear glowing green to them as he killed them. 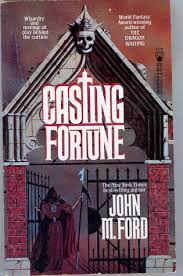 Not the answer you're looking for? Browse other questions tagged story-identification short-stories magic or ask your own question.

14
Title of story about human astronauts who crash on an alien planet with lizard-like humanoids
5
Looking for a short story where there are murders taking place with magic
7
Trying to locate a story in which a man is so good he sprouts wings, then over-corrects and grows horns (or vice versa)
9
Short Story where a girl with magic in a jar loses her magic when the jar is smashed
6
Short story called “ten for one” or similar?
11
Story about alien art smugglers
6
Story about a family of farmers defending against a swarm of insects
9
Fantasy book where two magicians travel to many worlds while being chased?
8
Short story where a Vietnam vet is hunted in his dreams by an undead native