Why do Panserbjørns speak English?

Is there a backstory to explain why the bears speak English? In Golden Compass it doesn't even seem like they have their own native language (I haven't read further). Why would that make sense (in-universe)? 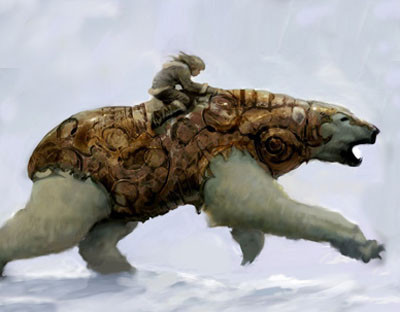 It is apparent that English is a sort of lingua franca in Lyra's world. Note that it is used in the Magisterium, and the Russian Priest in the remote Siberian village that Will meets in Amber Spyglass speak English. The priest particularly speaks English as a second language, whereas the other villagers don't.

The Armoured Bears that Lyra speaks to are royalty among the bears. They speak English as it is the language that allows them to communicate with the widest range of humans, when they need to.

At times when Iorek is talking directly to other bears, the translation convention may hold. When Iorek speaks, his words are rendered in English, but he is actually speaking in Norwegian (or a local bear language).

Not the answer you're looking for? Browse other questions tagged his-dark-materials golden-compass or ask your own question.

38
Why is “His Dark Materials” by Philip Pullman considered by some as anti religion?
8
Can it be true that Panserbjørnes don't have daemons and have no afterlife?
2
Why don't the spectres in HDM attack Mary Malone?
10
Why do dæmons in “His Dark Materials” never assume combat forms
15
His Dark Materials - Mythology and Symbolism Behind Dæmon Forms
5
Why do Will and Lyra's personalities not change in the world of the dead in Northern Lights without their Daemons?
4
In the first book of “His Dark Materials”, why didn't Lyra ask the alethiometer what the Gobblers were doing?
16
Why does Mrs Coulter’s hair change colour between La Belle Sauvage and His Dark Materials?
5
Why did the Dust stop flowing away when Lyra and Will realized their love for each other?
6
Why didn't Will continue to make windows and fight the Spectres?