Fantasy novel about coping with a plague

About ten years ago I picked up a fantasy novel at the library. It was really good, but now I have completely forgotten both title and author.

It was a really great novel and it'd be amazing to read it again. I know this is kind of a long shot. I know it's not much, but maybe someone else had a strong response to it too.

The book you're describing -- particularly the end -- sounds like Secret Sacrament by Sherryl Jordan.

Born the son of a wealthy merchant-mariner, Gabriel is to take over his father's thriving business one day. But when he witnesses a brutal act committed against a Shinali women, he is inextricably bound to a different destiny. Highly intuitive by nature, Gabriel is a born healer, a vocation he pursues despite his father's demands. His gift as a healer is finally legitimized when he is accepted into the Citadel, the most esteemed institution in the land. He is soon in league with the powerful of the empire, including Empress Petra herself, who comes to rely on his ability to interpret dreams. In gaining her favor, he makes powerful enemies and witnesses firsthand the corruption that is weakening the empire, rotting it from the inside out. Soon, he will be called upon to make a choice --- a choice that will threaten Navora, his beloved Shinali, and his very life. Who will prevail?

It does end with the main character taking the sickness upon himself to "prove" the plague is harmless, but it's by mixing blood via a handshake with cut palms, not via a cup or a kiss.

If you read it in Danish, I'll match your long shot with another - have you looked at the books of Margit Sandemo ? She's Norwegian but her books have been translated into many languages, including Danish.

This is only a partial answer as I've only read about 3 of the books (in English) but here's what I remember (and thanks Wikipedia!).

Her Legend of the Ice People series is 47 books long, published during the 80s (matching your timeframe). It's the history of a specific family, some of them touched with a measure of healing ability. Eventually over the course of the books they travel over Europe and Asia. Plague occurs in the books.

I call this a partial answer because if it is a Margit Sandemo book, it's likely one of the later books which I haven't read, or her other 40-volume series which hasn't been translated (The Best Serial Novels of Margit Sandemo).

Could it be The Stand by Stephen King? 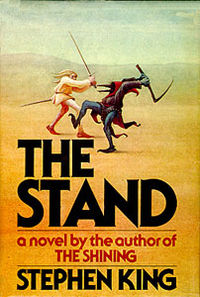 I don't remember the ending - I read it more ~10 years ago, but some of your points match this book.

The Plot from the Stephen King Wikia is:

A deadly virus called "Captain Trips", engineered as a advanced biological weapon by the government, is accidentally spread across America, causing 99.4% of the entire world's population to die. The 0.6% who survive struggle to find their bearings in the aftermath of the plague. They all dream about two opposing figures: Randall Flagg, the Dark Man, and Mother Abagail, who is receiving visions from God. The survivors split into two factions, one led by Flagg, and one led by Mother Abigail, and prepare for the final stand between good and evil. Captain Trips

The first takes place over nineteen days, with the escape and spread of a human-made biological weapon, a superflu virus known formally as "Project Blue" but most commonly as "Captain Trips" (among other colloquialisms). The epidemic leads directly to the death of an estimated 99.4% of the world's human population.

King outlines the total breakdown and destruction of society through widespread violence, the failure of martial law to contain the outbreak, and eventually the death of virtually the entire population. The human toll is also dealt with, as the few survivors must care for their families and friends, dealing with confusion and grief as their loved ones succumb to the flu.

The expanded edition opens with a prologue titled "The Circle Opens" that offers greater detail into the circumstances surrounding the development of the virus and the security breach that allowed its escape from the secret laboratory compound where it was created.

7
Fantasy Novel - Female Protagonist who climbs a tower and encounters magical obstacles before facing off with a wizard
15
old fantasy novel with ravens or crows and magic staff
7
Fantasy novel about a warrior woman with a golden hand?
10
Help Identifying fantasy novel about magic red jewel
10
Novel about genetically engineered bacteria that causes hallucinations?
8
A story about a beneficial 'disease': 'nerve skin'?
4
90's Young adult fantasy novel with a shapeshifter character with purple/violet eyes
24
Novel about a plague that is released in modern times when an early Christian relic is removed from its receptacle