Why did the clones' blaster color change?

In Star Wars Episode II: Attack of the Clones and Episode III: Revenge of the Sith the Clone Troopers mainly use blasters that fire blue: 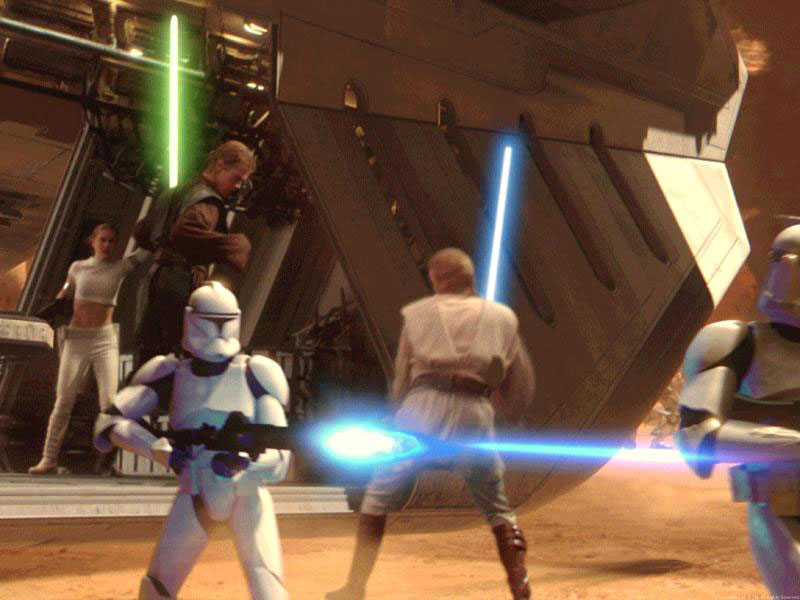 However, in the Galactic Civil War era the troopers mainly use blasters that fire red: 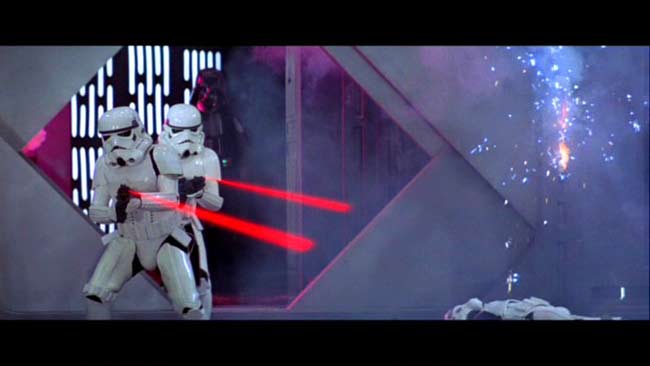 The explanation with good evil is ... well ok-ish I guess. BUT

The Clone troopers used the DC 15A blaster rifle for most of their active time. It was the standard issue rifle.

The Storm troopers used E11 blaster rifle. The E11 is based on the DC 15A and it had 3 settings (lethal, stun, sting). The E11 was standard issue for Storm troopers.

So beam colour can be because it was an ENTIRELY different weapon or it can be because clone troopers used stun and sting settings and Storm troopers only used lethal setting. (speculation on my part here)

In the EU, the gas used in the blasters indicated color.

The Republic may simply have used a different provider before becoming the Empire and color changed as stocks of the blue gas dropped. Also, different versions of weapons, such as cannons verses hand weapons, might require a more condensed gas or a different type of gas to maintain the excited charge.

As the Republic became the Empire and mopped up the Separatists, they would have more access to the production of other gasses, and over time those gasses may have been easier to produce or Imperials (and Palpatine) changed the color to signify a new order in the galaxy. (Not the NEW ORDER of Episode VII, but a new government.)

The switch from red to blue signified the clones fall from grace. Throughout the SW films, blue represented good while red represented evil.

My theory to why the clones use blue blaster shots is because they are firing ion bolts made to disable droid ls more easily rather than kill organic beings.

Its just used to distinguish good from evil for the viewers. For example, in SW: The Clone Wars S05E01, some of Hondo's own men turn against him, and their blaster shot colour changes from blue to red while Hondo's other mens blaster stay blue. Now, everyone in the same team usually has the same blaster colour, right? And they coudn't have changed their colour to red just because now they're the "bad guys." To themselves, they weren't bad. So the colours are just to show to the viewers that blue is good and red is bad from the point of view of the main character...

My answer: An in - universe explanation is that the blaster colour was determined by gas color, and the Republic and Empire had access to the high quality green and blue gas. The Republic may have also used ion bolts (which are blue) to counter the Separatist battle droids. When the Empire took over, the Stormtroopers began using a new type of blaster, and Palpatine may have chosen red as the color of their blast to show change and terror. The Rebels most likely used all red bolts because they were cheaper. An out of universe explanation would be that in the originals, the colours weren't well planned, so everybody used red blasters and the Empire used green turbolasers to look terrifying in evil. While in the prequels, more had been planned and they had more money, so the clones stuck to mostly blue to symbolize good, and the Separatists used all red to symbolize evil

Since no one has made a full, clear explaination... Blaster bolt colors work like this:

Blue: High quality gas mixed with ion, it was primarily used by the clones as most of their enemies were droids, the ions work really good against droids and machines.

Green: High quality gas, filtered gas. Although some blasters used this it was primary used on ships such as TIE Fighters and Star Destroyers.

Red: Poor quality gas, also the most common and cheapest. Most ships and blasters used this for obvious reasons.

Light blue: Used by clone cadets during their training, they are non-lethal bolts.

Yellow: Probably some sort of exotic gas, only used by certain Mandalorians.

Now i will explain why some factions has which color.

Rebels: The Rebels mainly use red because it is the cheapest, and the Rebels don't exactly have the biggest budget available.

Empire: The Empire's infantry uses red blaster bolts because they simply don't need better gas, most enemies wear poor armor and can easily be pierced by the common red bolts. BUT! The Empire's ships use green, this is because Imperial ships are cheap and mass-produced. The common TIE Fighter is way below the average X-wing, so they need the higher quality gas in order to pierce X-wing's shields ect.

Republic: Like mentioned, the Republic used blue gas which is ionized and thus works good against the droids and their machines. Most starfighters used green to fight the Seperatist starfighters.

Seperatists: Like the Rebels, the Seperatists made use of cheap gear, this includes the gas quality because they had mass-produces soldiers and weapons.

Technically, I believe, the clone troopers also used blasters with ion charges that are more effective against droids (ion weapons surpass armor and affect computer/machine systems). As the clone wars wind down into a resistance against terrorists and dissidents of a biological origin, then the expense for ion charged blast bolts is not needed by empire troops.

I think it depends on what rounds they used. The clones had rounds that shot blue. It could have been to signify their side. But maybe the rounds were tested and it just so happened that the most efficient rounds were blue. If you watch Star Wars the Clone Wars or play Star Wars Battlefront 2, then you know each gun can shoot any color. For example, on several occasions especially with the pirates, they had DC-15a blasters or sometimes ever DC-17 pistol. But they were shooting a different color besides blue. The pirates shot red rounds out of them, and I think someone else shot green. In Battlefront 2 when you change the type of ammunition for the DC-15LE and several other guns, they shoot a different color. Red, blue, or green.

Okay guys it's actually quite simple. You see in the clone wars the clones were fighting against non living machinery, while the empire was fighting against living beings in the galactic civil war. So due to the fact that they were shooting against droids, the clones used ION blasts, which is more effective against machinery such as droids. Although an ion blast can kill a living being at close range, it was effective against droids in all ranges, while normal (red) blasts were effective against droids at close range, but were ineffective at long range. The green tie fighter blasts have a similar concept, only the green was used to A: Distingush fire from imperial units (basically letting the other ships know that it's the empire that's shooting against them) and B: the green blasts were more precise and explosive ION equivalent rounds. I hope this answers your question.

A true, in universe answer is that the clones used weapons that were hugely overcharged, resulting in these blue bolts. The clones weapons not only had far more power than those of the storm troopers or battle droids, but they were also ionised, as that had more power against electrical circuits of droids, much like the Gungan army’s ‘boomers’.

Ok, these are all good theories. Practically speaking, Georgie wasn't planning ahead with all the more after the first movie. Red is there most easily recognizable "laser" color. Green lasers are quite common as well. It's recognizable. In the originals, there was somewhat of a difference made between space and the insides of ships, surface of planets in terms of lighting. Most blasters were red. Spaceships shot green stuff because it was. Sickly looking, and gave the right atmosphere. Blue was part of the image overhaul that changed fiercesome Stormtroopers into 'heroic' clones...

55
Why did Darth Vader choose to take shots from Han Solo?
63
Why are the colors reversed between some blasters and lightsabers of the Republic/Rebels and Empire?
31
What is the significance of the reversed colours of imperial and rebellion lasers compared to lightsabers?

17
When did Anakin stop being a Padawan?
42
Why was the single war between the Republic and The CIS called "The Clone Wars"?
5
Why did the Separatists try to take Jango's DNA?
6
Why did the battle droids' voices change?
5
How did the Clones find Jedi Investigators during Order 66?
6
Did the galactic Republic keep up the manufacturing of Clones?
11
Why was Kashyyyk a system the Republic could not afford to lose?
7
Why did the Jedi think that killing Count Dooku and General Grievous would end the war?
21
Why did Darth Vader need extra equipment (lenses) to clear his vision?
3
Are the color-changing eyes a sign that happens temporarily when someone first accepts the Dark Side?