In previous discussions regarding Wolverine's regenerative capabilities such as When Wolverine regenerates, how does his hair know when to stop growing?, one of the ideas floated around is that his body stores some sort of "snapshot" or "image" which his body effectively restores itself to.

I'm not entirely sure I buy it, but I haven't seen any other plausible theory to explain it.

The basic process for normal muscle building is that a person strains the muscle fiber until it breaks and that the body rebuilds the broken muscle fiber - only stronger (assuming proper rest is allowed and calories provided).

But what about Wolverine?

If he breaks down his muscle fibers, would his body regenerate the muscles back to this supposed snapshot-state, or would they actually regrow stronger than before as with a normal human?

Is there any evidence of him ever building muscle mass once his mutation kicked in fully?

Note that since he was still visibly aging during the events of the Origin storyline, it can be inferred that his healing factor had not reached its normal performance level yet.

No, it is unlikely Logan can continue to increase his muscle mass through conventional weight training processes. Once Logan reached his adult size and his mutation its maximum development, he has not appeared to have changed in size or mass appreciably in any of his appearances in comics. It makes sense that he would not change size or mass if his body resets to his perceived last state as he appears to do. 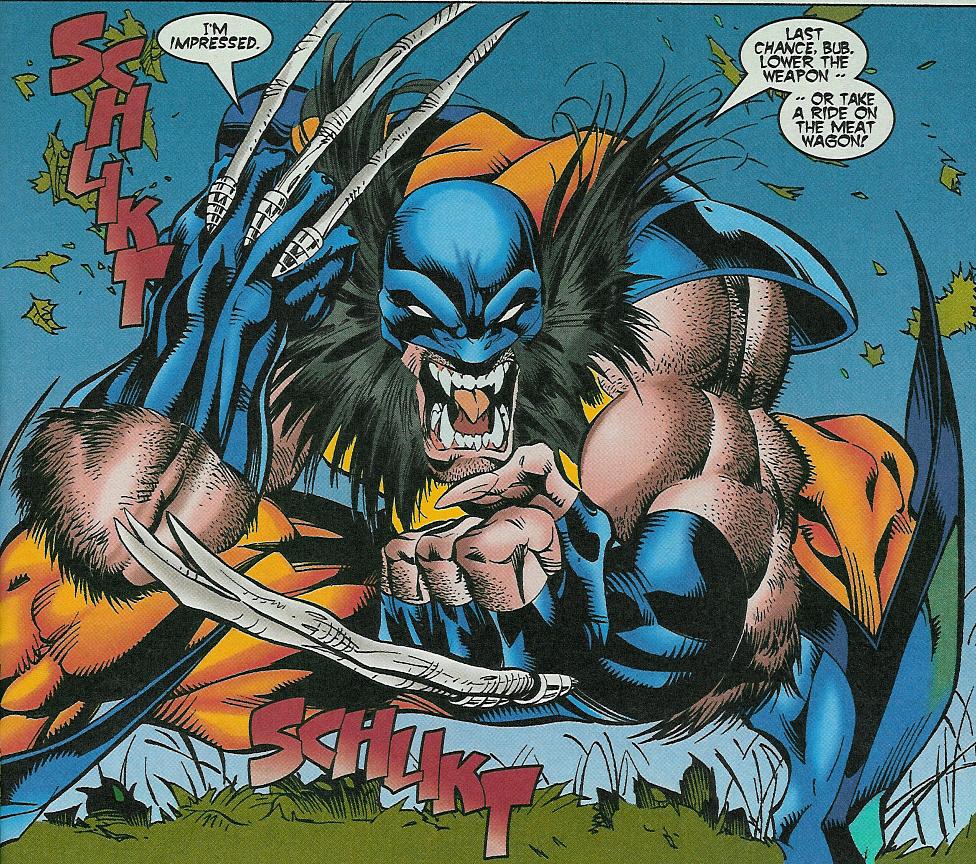 Well, one could argue that since muscular damage is, in its essence, the same as any other bodily damage, his healing factor would kick in just like if he were suffer from an injury. This would indicate that Logan would be able to put on muscle nearly instantaneously, just like how he heals nearly instantaneously, with the muscle fibers repairing as soon as he puts a weight down. However, seeing as he doesn't appear to put on any kind of apparent scar tissue, it is likely that his healing factor is returning to some kind of snapshot, healing so perfectly that it doesn't bother to build damaged tissue back stronger than before, thus returning him to the same spot he was in before he started trying to put on muscle. However (a second time), if it were true that Logan could not put on muscle, than the addition of adamantium to his skeleton would have slowed him down eternally, causing him to be forever weighed down by the metal. Because this is not the case, and that Wolverine adapted just fine after adding a hundred pounds to his frame, we can conclude that he can definitely build muscle, though probably not on the same timeline as normal humans. He would either be much faster or much slower.

In conclusion, wolverine can probably build muscle, as indicated by him being able to adapt to an extra hundred pounds on his skeleton, though it's hard to tell how long this would take.

Based on Origin, I'd say that yes, he's able to build muscle after his mutation has manifested:

He's introduced as a frail, sickly child. The events surrounding his claws coming out for the first time drive him to run away from home & live/work in a stone quarry under an assumed name. It's only by working in the quarry for years that he begins to put on muscle.

I don't know if that counts as the mutation having "kicked in fully", but the claws and the healing factor both seem to be present.

I would imagine that there are two simultaneous metabolic systems operating side-by-side. The first is the standard human metabolic system, where people grow older, stronger, or weaker on a semi-determined time-scale (telomeric degeneration, etc.). That this operates is somewhat of a truism, since Logan has aged (and will continue to age, if you take 'Old Man Logan' as a true continuity). The second is his mutant metabolism, that repairs the damage he suffers. This second system is only overlaid on the first, however. It does not override it, as you can see from his ability to form new memories, and his aging in Old Man Logan.

As to the state to which it is repaired to (and to support the bi-metabolic hypothesis), there has to be some genetic marker guiding the repair (i.e. the mutant metabolic process is not sentient, but a reactive part of his physical person). That marker would then act like a 'snapshot' as you said, to guide the repair - but there is no reason to assume that it truly interferes with the standard metabolic process (or else he could not, say, form new memories). Indeed, because Logan ages, we know that it does not ultimately interfere with the process on a long enough time-scale (yes, I know he is very old, but he is aging). The mutant regeneration is not static, it is simply that the way in which it operates is so rapid that it interferes with normal degeneration, and thus slows the aging process to a near standstill, and would do so likewise for growth (muscular, in our case in point). Logan would have to work out so hard and so long that it might not be practically possible for him to put on more muscle mass, but per the rules under which his regeneration operates, he should still be able to, albeit at the same snails pace with which he is aging. It would follow then, as a fun consequence, that if you took his healing factor he would not 'turn to dust' like he would is there was a magical preservation that was later taken, but rather simply age at an appropriate rate relative to his cellular development.

TL/DR: His muscular breakdown would be recognized by his body as part of a normal metabolic process, but the repair signal, modified by his regenerative capacity, would be so minor as to significantly retard muscular growth (via muscular destruction). Likewise, since he will continue to age into the future, there is proof that an overarching, standard metabolic/genetic system determines the ultimate path of his development, simply modified by an ability to heal that slows every aspect of that development.

Logan would probably be able to build some muscle just like any other being based on his genetics and increasing hormones. His regeneration most likely kicks in once a threshold is reached beyond any norm (taking into account the severity of the damage and how quickly it occurred). Tearing down muscle fiber via weightlifting would probably not kick In his regenerative powers.

I imagine he could. If nothing else, aren't there substances that temporarily reduce or block his regeneration? So give him that + lots of aas, hgh, insulin, super soldier serum, and whatever else + food, have him lift and repeat. After he's as big as you want him to be stop blocking his regeneration.

Or maybe his body is smart enough to recognise bad and good injury so he could actually build muscle better than a normal human since his regeneration would help him.

Also if you count the movies you can clearly see that the actor playing him has put on muscle.

20
When Wolverine regenerates, how does his hair know when to stop growing?
4
Can Wolverine build calluses?