How did the Dynamic Duo go from wearing civilian clothes at the top of the Batpole to wearing their costumes at the bottom?

I never understood how Batman's superhero technology was supposed to work in the 1966 TV series when Bruce and Dick left Stately Wayne Manor via the secret wall panel to enter the Batcave. Is there a canon explanation of how the Dynamic Duo went from wearing civilian clothes at the top of the Batpole to wearing their costumes at the bottom, and how they rode the rocket platform from the bottom in costume and ended up at the top back in street clothes?

I always understood it that the poles slide down and half way down there is a place they stop get off and change. Then continue to slide down. On the 60's TV show they never actually said they slid from the top to the bottom all in one movement. All they show is them start sliding and then arriving at the bottom.

However, in the 1966 feature film that came out in between the first and second seasons of the television show, midway down the Batpoles there is an "Instant Costume-Change Lever." 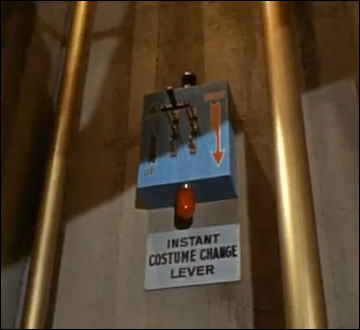 They never really explain how this works but apparently being a millionaire has its perks!

Nanotechnology. This is also the way Superman hides his "undercover" clothes (they're not stored in telephone booths).

Well, probably not, but at the same time I always considered this being part of the whole "super secret Bat Tech" (i.e. you can't explain it). You could as well ask why he always got the perfectly right thing in his girdle, despite the limited amount of space (there might be Time Lord technology involved or some kind of portable time and space displacement module or whatever).

In the end, it's most likely one of those "wouldn't it be cool, if..." things. Just keep in mind we're talking about vehicles with some kind of jet engines built in as well. "Oh look Batman heeds the call, I'll better stop on the side of the road to let him pass more easily." The next thing you'd see is your car flipping off the road, propelled by the Bat Jet Engine built into the Bat Mobile.

On a similar note: Why would you rely solely on the bat signal to call Batman? Just think about it. Wouldn't it be obvious (and the perfect choice) for the bad guys to do their things during the day, especially when you've got a clear blue sky?

I actually remember similar things from some old cartoon show, Filmation's Ghostbusters. They were depicted with clothes being changed by some kind of contraption/Rube Goldberg machine (which involved some demonic or ghostly stuff). Something like that might be involved as well. At least one way probably works in some way, as depicted by Wallace & Grommit.

In the end, I've never heard of any real explanation for the whole "clothing slide". Also keep in mind that the whole series has been meant as some kind of animated comic (weird/odd camera angle, especially for the hideouts of the bad guys; drawn effects during fights; sometimes breaking the fourth wall; repettiive/signature scenes like climbing a wall; etc.). With that in mind you can't necessarily consider a "constant screen time", i.e. just because you see them sliding up/down within seconds doesn't mean we're missing like 5 minutes where they change clothes, especially on their way back up.

Stayed up many a night as a kid thinking about this subject. The midway room change thing was all I could come up with as well. I think there was an episode where Joker gets on one of the poles and Robin/Dick says something like, "Good thing such and such were not set or he would have ended up in a Batsuit." Something like that. So in the fantasy world of TV magic and Batman tech, it just worked and you gotta believe. Reruns come on METV so I'll be watching those poles as well as the rest of the show.

Cameron GrubertCameron Grubert
3111 bronze badge
6
|  Show 1 more comment
2
Want to improve this post? Provide detailed answers to this question, including citations and an explanation of why your answer is correct. Answers without enough detail may be edited or deleted.

1
How did Superman return from the Phantom Zone?
14
How did they get away from the tsunami if there were 45 minutes before the next slide?