Identify the recent story with a cross-dressing undertaker/necromancer?

There was a book within last 18 months or so with the following characteristics:

Ok, after some googling, I finally remembered the name. It's A Festival of Skeletons, by RK Astruc and Kay T. Holt. 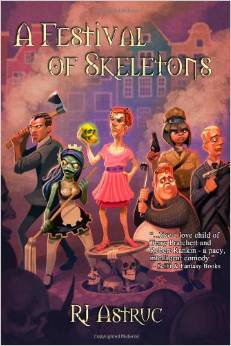 When Kamphor's west end sees a series of prostitutes murdered, its citizens are fearful that a serial killer known as the Knife has returned. But the mortician Sink, owner of Kamphor's finest morgue, doesn't believe that the Knife has resumed killing - and he'd prove it, if his former student and current hateful rival Damien Torvault wasn't getting in the way.

Sink and his two apprentices, handsome-if-loony Joshua Finkle and merkind Vona Urgarth, investigate the murders on their own. Sink's ability to tell exactly when and how a person will die just by touching them earns him no friends, but it does yield some interesting clues - as does Sink's other gift. The one which incites him to wear women's clothing.

The investigation is further complicated when Joshua's time is taken up running a 15-Step program, and Vona becomes intrigued by a repugnant yet strangely irresistible cook. Even Sink's next-door neighbor, Policewoman Arifia Fowles, seems hell-bent on not just hindering Sink but arresting him, regardless of a crime.

28
Identify a book with a social engineering theme
23
How does the scientists version of the Lords Prayer (Our Father) go?
3
Recent book trilogy with a princess who had a dragon, and a servant boy
0
Can anyone identify a recent Supernatural-style TV or cable show?
13
Identify a story about a teen boy who learns to use magic with his lizard companion
12
Recent movie, girl wakes up and answers A.I. questions while dressing
8
Short story: guy discovers duplication spell, clones himself for music band in the woods, one clone leaves and starts revolution
10
Trying to identify sci-fi story with problem solver using radiative cooling
7
Fairly recent super claustrophobic chapter/short story