Book: The main protagonist is transformed into one of the non-humanoid aliens

It's a bit like District 9 in that regard, I guess. However, the aliens are even stranger. I think they're quadrupedal. Maybe their tongues are long, I don't remember. I also remember there may have been copulation between the transformed protagonist and a member of the alien species.

The aliens have very distinct senses, which the protagonist discovers in much detail. Possibly their sight or something with their tongues.

The events happen on the alien's planet. The point of the story is one of appreciation for completely alien cultures - the humans come as conquerors, and one of them learns to live with the "natives" (once he becomes one of them).

Based on when I read it, it must have been written somewhere in the 20th century, probably before 1990.

It's none of the books on this list: http://en.wikipedia.org/wiki/Category:Shapeshifting_in_fiction

I'm sorry for being so vague, but this is all I can remember. 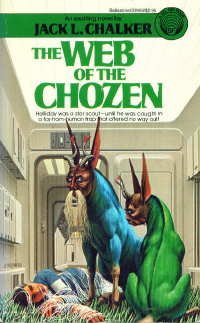 A spacer named Bar Holliday crash lands on an alien planet that is populated by "Choz", quadrupedal, deerlike creatures that turn out to have been genetically modified humans. Apparently they were a religious colony fleeing an oppressively totalitarian society, and their ship's AI decided the best way for them to be eternally peaceful was to be transformed into these grazing animals on a savanna world with no predators and a perfect climate. Like you mentioned, they use their tongues to manipulate objects, they can also spit a substance that forms into cobwebs, and they have modified vision that is color-coded depending (one color for food items, another for living beings, etc). The transformative virus changes Holliday into a Choz, too, which he fights against at first, but gradually comes to accept.

The difference is that Holliday didn't come as a conqueror, but he does engineer a way to leave the planet and after some fighting with another human colony, decides the best thing to do is turn the rest of humanity into Choz, too.

Perhaps you are thinking of "The Sparrow"? It focuses on a Jesuit priest who goes to live in an alien culture, and is physically altered by the aliens.

Not the answer you're looking for? Browse other questions tagged books aliens story-identification or ask your own question.

6
Building a house with mouth cement

8
A story I read in about 1986: A boy meets an alien, his mind is wiped afterward
7
Book with blob-like non-humanoid alien that fuses with human
7
Title of a book I read in the 1980s, human scientists transformed into aliens in a world-zoo
5
Alien visitor to planet forced to carry warrior's intestines in pilgrimage
10
Which story featured a human woman who had a relationship with a short lived alien?
10
Sci fi book, aliens on their planet are addicted to sugar
13
Science fiction story about aliens that turn into butterfly or moth-like creatures at the end of their lives