How did Roderick Burgess capture Dream instead of Death?

I have read all the main Sandman Comics, but I haven't found how he MISTAKENLY captured Dream. Dream, being such a powerful being (I was gonna say "creature" but decided against it!), was surely not easy to capture.

Throughout the series we have seen that even the extreme events against Dream have been somehow planned by him, or he has some knowledge of it. Could his capture be something he knew about, or planned? (Though, I can't see how this is possible?)

Gaiman has announced that this question will be answered in the mini-series "The Sandman: Overture" with the first issue being released October 30th 2013. (2) So "it will all be revealed in a moment" so to speak. 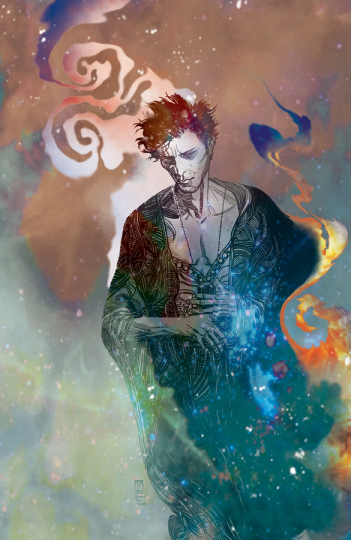 Edit: Jeff asked for an update. Here goes: The answer by MetaMaterial Girl still stands. It is established in issue #1 of the Sandman that Burgess captured the wrong Endless and realized so immediately. It would seem that the ritual captures "an endless", without explaining how the right endless would be singled out. This is not addressed directly in "Overture"

What "Overture" adds is:

1) It establish that the endless can be summoned in ways they cannot avoid. (issue #1 of overture)

3) It explains why Morpheus had to be captured. This is not spelled out explicitly, but consider this:

We can then see that the dreamers in the final issue of "Overtrue" not only dreamed a world where the dream-vortex never happened, but dreamed themselves a better Dream. They (and Morpheus) could not directly change him in the new universe, but could set actions in motion that would ultimately cause him to change.

TL;DR: Burgess' capture was due to a remake of the universe, that sought to create a better Dream.

In Preludes and Nocturnes, in which Dream is captured, the reason for the mistake is not described. However, later in the Sandman series, during a flashback, Dream recalls his imprisonment, and hints that it occurred after a significant event, far from Earth, which he had attended. This event, or the lengthy journey back, had weakened him considerably, and he was returning in a vulnerable condition. It was only because of this vulnerability that the spell cast by Burgess was able to capture him, the implication being that it was a fluke that he was able to succeed even so far as getting one of the Endless at all. Death, it is implied, is far too powerful to fall to any mortal spell unless she deliberately limits her powers (which she does do occasionally; see Death: The High Cost of Living). It is also possible that the Magdalene Grimoire, the occult book used in the summoning ritual, was improperly employed, or that Burgess simply was not specific enough when he devised the ritual. Later stories employing the Magdalene Grimoire suggest that it is easily misused.

The question of intent is an interesting one. On the surface, Dream's capture was a simple accident, one he had to spend quite some time and effort to rectify. However, it was only because of his imprisonment that

his successor, Daniel, was brought into existence, by being gestated by Lyta Hall in the pocket dreamworld controlled by Brute and Glob.

As you had noticed, many events that seem random end up being used by Dream to his own ends. At the end of the series, when

Dream chooses to end his own existence by allowing the Furies to bring about his death, he seems aware that the child Daniel will take his place, as indicated by his gifting of the Eagle stone to Daniel before he departs. The duty-bound Dream may not have chosen to lay down his burden in the absence of a successor to pick it up.

Thus, the end of the series was dependent upon the beginning, an apparent accident and misfortune leading to the most powerful and pivotal event in the existence of the main character. I consider this both a highlight of Dream's foresight, and of the writing ability of Neil Gaiman. This arc also points out both Dream's strength and his weakness, for though he is powerful and timeless enough to foresee and use seemingly random events, ultimately he is not able to choose to step off of the path of consequences.

8
How is Nekron related to Death of the Endless?
9
What did Lady Johanna ask of Dream?
8
How will Death of the Endless die?
5
How did Mazikeen end up with Lucifer at the "Lux"?
6
What did Morpheus learn in The Sandman: The Dream Hunters?`
3
Did Neil Gaiman base Dream's eyes' appearance on Terry Pratchett's Death?
11
Did the other Endless know that Dream was held prisoner?