What was the equation shown in Benderama?

In the S8E2 episode of Futurama, Benderama, The Professor generates an equation to track the number of Benders that will be generated. It was shown on the screen for a few seconds. Can someone explain what this equation was and how it works? 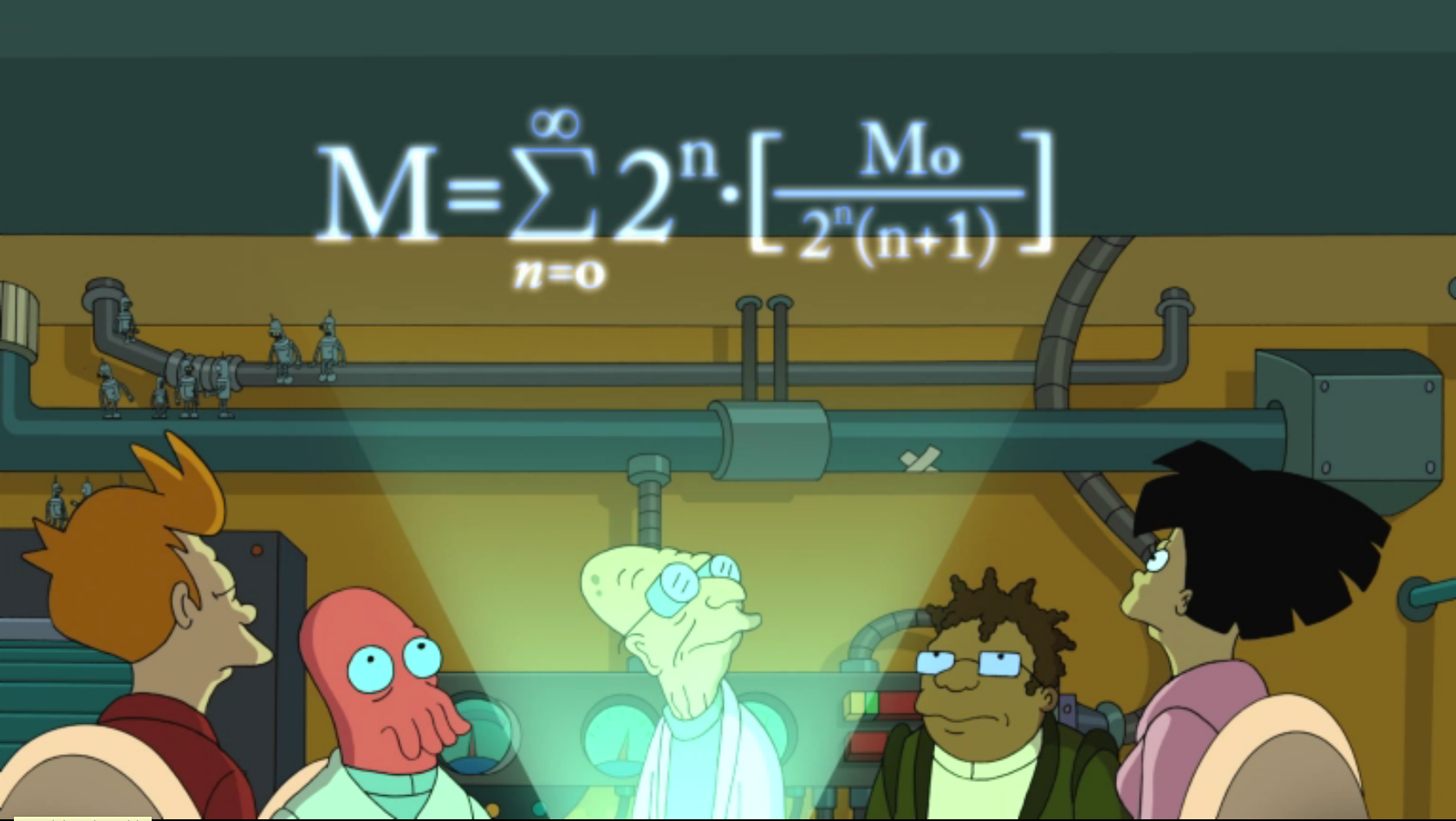 This equation is actually a red herring.

The Professor is discussing the total amount of mass consumed in order to create all of the Benders, which is equivalent to the total mass of all of the Benders themselves if we assume conservation of mass (i.e. mass in = mass out). This is a safe assumption seeing as how the Professor describes the behavior of the duplication device as "reorganizing the raw material".

Now, a divergent series was needed as a plot device to illustrate how the replication of the Benders would eventually consume all matter available. In this respect, the equation was satisfactory in that it is certainly divergent, being that it is a generalized harmonic series (as Zev correctly identifies in a comment). This is easier to see when it is simplified by noting (as OghmaOsiris did in their answer) that the 2n terms cancel each other:

However, this is not the correct divergent series for this situation.

First, we will have to ignore the limiting effects of atomic-sized Benders. After a number of generations, the Benders would get so small that, if they were "normal" matter, they would be comprised of a limited number of molecules, too few to create a complete bending unit. However, one scene shows fully-formed yet still atomic-sized Benders manipulating and ingesting molecules, implying that they are formed not from "normal" matter but from "shrunken" matter. In the Futurama universe this is reasonable since The Professor previously referred to the existence (and extravagant cost) of "tiny atoms" in the episode Parasites Lost when Bender asks the Professor about shrinking them:

Bender: Yo, old guy, why do we have to use those tiny micro-droids? Can't you just shrink us?

Farnsworth: Oh, my, no. That would require extremely tiny atoms, and have you priced those lately? I'm not made of money! Leave me alone!

So, assuming "tiny atoms" are involved, we can safely calculate the mass for an infinite number of generations without worrying about having Benders that are fractions of the mass of a normal atom.

A better choice of equation...

Then the correct equation for the total mass of all the Benders (and thus the matter they have consumed) as the number of generations approaches infinity is this:

Where M0 is the mass of the original Bender and rmass is the ratio between the mass of a Bender copy and the Bender it spawned from. This is a geometric series, and I guess this equation isn't as interesting looking as the other equation they used. Maybe they chose the equation that they could display in a more complex way, or maybe they just made a mistake. Such is science fiction. ;)

Now, does this equation diverge as the premise of the episode requires? Whether or not the equation is convergent is determined by the value of rmass. In the episode, Bender alludes to his first 2 copies as being "60%-scaled replicas of me". Whether you apply this scaling factor to the physical dimensions or to the mass will give very different results.

Scaling the physical dimensions by 60%...

If we compare the heights and widths of successive Benders, it does appear that they are scaled by 60%. Using this screenshot, I made a few rough measurements (shown in red): 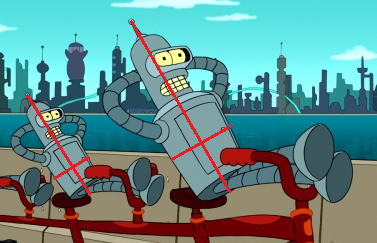 The ratio between these measurements came out to be 0.594 for the height and 0.599 for the width. As Erik notes in his answer, scaling each dimension by 0.6 will end up scaling the volume (and thus the mass) by a factor of 0.216. Using this value for rmass gives us a convergent series that asymptotes to a total Bender mass of about 1.76*M0. Not even two Benders worth of mass!

Since many/all of the Bender clones come together at one point in the episode to battle a giant, it's quite clear that there is much more than two Benders worth of clone mass. So, although the physical dimensions do appear to scale by 60% for each new generation, the mass (somehow) does not appear to scale concurrently. Maybe there are Benders replicating themselves more than once, which would invalidate the first assumption I made above.

If the mass itself scales by 60% between generations, then rmass would be 0.6 and the equation becomes divergent, growing without bound. Yah! That's what we want to see! But, given the discrepancies, it's something of an empty victory, and writing this answer, while fun, was largely "mathsturbatory". Ultimately, you just have to realize that it's science fiction, not science, and the writers won't always get it 100% right.

It's basically a summation from 0 to infinity of powers of 2 multiplied by the original amount over the same power of 2 times n+1. Effectively adding a smaller and smaller fraction until the addition to becomes 0.

It could be rewritten as:

You might want to ask math.stackexchange.com if I'm wrong.

Here's my analysis-- can someone spot a flaw? I'm going to make this the topic of my next Math Mutation podcast. :-)

Rather than kilograms, let's simplify our calculations and measure mass in Bender-masses, or Bs, where the mass of the original Bender is 1B. What is the mass of the two half-Benders he creates?

Good news-- this series converges! The easiest way to see that is to notice that .432 is less than 1/2, so the Nth term is always less than (1/2^N), a well-known convergent series that adds up to 2. (A quick way to prove this is to look at the base-2 number .1111...) So, no matter how many replicas there are, the total mass will be less than 2 Benders, and our planet is safe.

And the writers were just messing with us by flashing that irrelevant equation on the screen.

I am a relative math noob, so please excuse me if this is obviously wrong. But it occurs to me that maybe the M in this equation is not meant to be the mass of the resultant Benders but rather the mass of raw material each generation consumes. That would explain why it gets smaller with each generation. If it's an infinite series, the threat of global destruction is of course still there.

Does this make sense?

13
How does the Anti-Life Equation work?
13
How is Bender able to return to the exact point in spacetime after travelling thousands of years into the past?
10
Was Bender programmed to be evil?
5
How can Bender not know how robot procreation works?
12
How many people were needed to get back to their original bodies using the mind switching machine?
3
In Futurama, are there jungles on Earth?
29
Why does Kif appear at the end of "Where No Fan Has Gone Before"?
3
How did Cubert not know the speed of light?