We are strongly hinted at in Last of the Time Lords (the final episode of series 3) that Jack Harkness ultimately becomes the Face of Boe. However, earlier in the same series (episode 3: Gridlock) the Face of Boe dies. 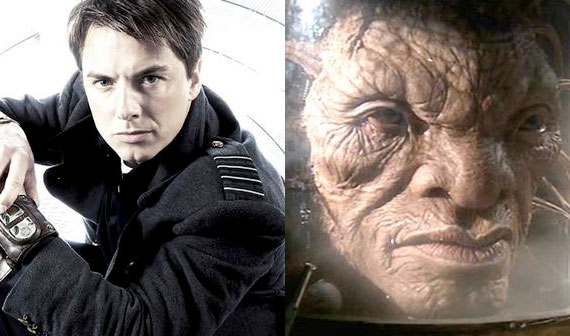 Since Jack is often described as "immortal", does this mean that they aren't actually the same character, or does it mean that Harkness isn't actually immortal?

In order to keep New, New, New ... New York functioning, the Face of Boe uses his life energy to power the systems. He did so for many, many years.

Jack Harkness received his immortality from the Heart of the Tardis in The Parting of the Ways. The Tardis is powered by a black hole, which is a massive amount of energy - but it is not infinite.

After 5 billion years and powering an entire city for an extended period of time, even the power from a black hole (such as one that powers the tardis) is going to give out.

Well, as one of Douglas Adams' characters once said, there's immortal and there's immortal. Don't forget that the episodes with the Face of Boe are set five billion years in the future. Jack's been alive all that time, presumably living through all the intervening years.

We could try posit that perhaps in all that time Jack's learned how to manipulate the vortex that made him immortal, and also note that he dies by his own choice in the end; or we could simply say that five billion years is as near to forever as makes no odds, and leave it at that.

A third answer could be that "strongly hinted" is not the same as "canonically established".

That is to say, I don't believe a word of it.

In the series, even though that the Face Of Boe/Jack can not die, that does not mean his bodily functions can not stop. For what we know, he is still alive, but he just can not move talk or use any of his physical or mental powers.The The Face Of Boe is just frozen in a shell of his own body at this point. So as we think he is dead, he is alive. Only trapped in space and time as a immortal with a body that does not function. So the Face Of Boe is not dead, only not functioning.

Well there are a few things that have not been mentioned in these theories. First of all, Jack Harkness is not human so we can not expect him to be the same as us biologically. The fact that there is a reference to the Face of Boe being pregnant in an episode actually lines up what we know about Captain Jack. In the very first episode of Torchwood he says:

"Contraceptives in the rain. I love this planet. Still at least I won't get pregnant, never doing that again!"

Jack Harkness having children (as the father) is also a part of the Torchwood, Children of Earth storyline. Those children are mortal. Just because the universe will not let him die does not mean that is the same for his children. Also, by the time of the episode, "The Last of the Time Lords" Jack has already lived on Earth for over 100 years and there have been references to him being stuck in a time loop while he was with the Time Agency (in the episode Kiss, Kiss, Bang, Bang) so there is no telling how old he was even before Rose made him a fixed point in time. Add another 5 billion years to that and there is no telling how his body would've reacted to all of his space travels and encounters.

Also "The Last of the Time Lords" episode clearly shows that Jack does not immediately recover from injury, only death.

The Face of Boe had been through so much, imagine what someone could do in billions of years. If Jack could be turned into an immortal, then why couldn't he be changed back to being a mortal? Maybe the only thing keeping him alive was the glass cylinder full of solution. Also maybe the writers didn't want viewers to know what happened, so they could make the Face of Boe come back in a future episode. Perhaps the Face of Boe was changed back to being mortal because the TARDIS had given him the powers in the first place. Time lords can only regenerate so many times, so maybe Jack could only come back to life so many times. Maybe the TARDIS was giving off some Time Lord genes?
This may sound insane, but the Face of Boe being possible doesn't make sense ether.

I have yet to find anybody else who's noticed this so I decided to share and hopefully you'll share, sorry if it's already been discovered. Anyways I think I found a clue about the Face of Boe, in season 3 episode 4 Gridlock approximately 11min in (on netflix) "Says back in the old days, on Junction 47, this woman stood in the exhaust fumes for a solid 20 minutes. By the time they found her, her head had swollen to 50 feet." Who does that sound like, a slight exaggeration (or possibly not, he could have shrunk over time) anyways most rumors get distorted but they almost always have a grain of truth.

I don't think jack could be the face of boe although I strongly believe almost without a doubt that he very well is if it wasn't for the fact that in the episode titled the long game the face of boe is shown briefly with the news reporter saying that he is about to have kids. Now unless jack found a way to have children then I don't know what's going on because also if he had his children then the following time later on this would be invalid because boe told the doctor they were both the last of their kind unless his children died?

25
Is there anything beyond subtle hints that Jack becomes the Face of Boe?
13
Where did the the others of "Boe"-kind come from?
7
Are "Bad Wolf" signs permanent and fixed Spacetime entities?
4
Question about Jack Harkness/Face of Boe
3
How old was the Face of Boe when he died?
4
How does the Doctor's aging work?
8
Is Jack Harkness in love with the Doctor?
12
Why didn't the Doctor become a vengeful God when he absorbed the Time Vortex?
10
How many nasties does the Doctor keep in the TARDIS?