Was Dr. Manhattan able to travel through time?

I'm rewatching Watchmen, and the question occurred to me - can Doctor Manhattan actually travel through time?

It is made quite clear that he can perceive all time as coexistent, but can he only look through that temporal window, or can he actually step through it and go back (or forward) to another time than his actual linearly existential time-frame?

Dr Manhattan doesn't perceive time as coexistent, he EXPERIENCES it as such. 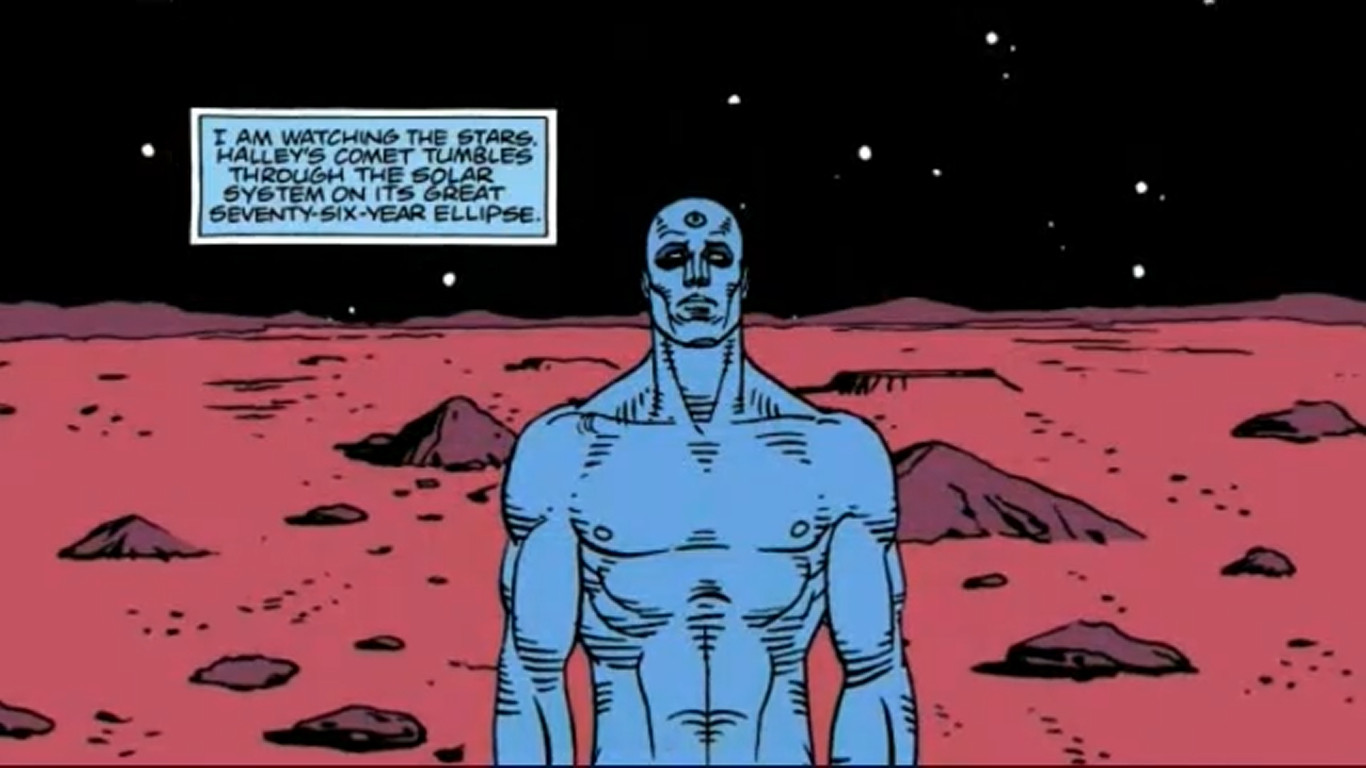 There are clues in the syntax Alan Moore uses to articulate Osterman when he is speaking in the first person: notice the tense.

No matter where he is, he always expresses himself in the present tense: 'I am watching the stars', 'The Photograph IS in my hand', 'It IS 1985, I am on Mars'.

He never makes a statement using the past participle, because for him he is experiencing the past simultaneously as the future and as such it is all very much the present for him.

He's a deliberately obtuse creation, and that's why he's discussed so much, because he holds a position and standpoint outside of human experience and understanding.

He cannot travel through time, because he is IN and ACROSS time simultaneously. All moments occur simultaneously, and as such time has become an abstract construct for him, one in which the idea of a sequence of moments becomes meaningless.

This doesn't mean he can alter or change time; no more than his very personal history anyway. Whilst he can see what is about to happen as far into his own experience as possible (before tachyon interference, hence his distress that this foresight is impinged upon), he can do nothing to stop its steady march, its progress.

Hence his muted sorrow when Laurie decides to go to dinner with Dan. He knows it is the beginning of an affair that will separate them, but can do nothing to stop it because he has seen into the future and KNOWS that it happens, because he is already experiencing it.

He perceives the world as a 'Watchmaker' would, so to speak:

He knows that 4pm is coming, and nothing he can do will stop 4pm from arriving shortly after 3, and before 5, which is also just as certain to occur. He doesn't try and skip 4pm and move straight onto 5pm, because he knows that's not what happens.

Against the Idea of Time Travel

No. His perception of time is asynchronous with his location. Meaning, Dr. Manhattan could perceive the past, present and a wide array of possible futures. But as a body with mass, he would be prohibited from traveling through time because it would require infinite amounts of energy to reach the speed of light.

A lack of a body was not an impediment to his continued survival which gives me a chance to COUNTER MY OWN ARGUMENT.

For the Idea of Time Travel

As an aside, the laws of physics prevent matter with mass from moving faster than light, (allowing the possibility of time travel) but since Dr. Manhattan's body only exists as an extension of his mental process, even when it was destroyed, he was able to continue to exist.

He can travel through time as a mental being not a physical one.

If that makes any sense at all.

I'm a little late to this party, but I think Dr. Manhattan has a uniquely realistic reason/ability to perceive time in this way based on his ability to transport himself vast distances instantaneously.

The theory of relativity would thus imply that he could see events in the future by virtue of being able to be in one place then another so rapidly. His speed would theoretically be far greater than the speed of light constant.

Not the answer you're looking for? Browse other questions tagged dc time-travel watchmen dr-manhattan or ask your own question.

20
Can Dr. Manhattan cease to exist?