Some 25ish years ago I read one of my fathers sci-fi books.

On the cover was some sort of 6 legged work animal pulling a big wagon. the animal was sort of dinosaur/elephant/bull like if I recall correctly.

They crashed their shuttle on the planet. There were some humans(?) there who fought with flexible sabers and triangular sharp shields. There were also some lizard like humanoids involved in the story, keeping others as slaves.

The animal on the cover was used for labor and food, I think they cut off meat from those while they were still alive.

as stated above, this was some 25-30 years ago so I don't know how accurate my description is here.

I don't recall much more of it, but it was my first sci-fi book and I would really like to know what it was.. (small paperback maybe 200 pages, really don't remember any details)

The description sounds a lot like Jack Vance's Planet of Adventure series; based on the cover, perhaps the first book: City of the Chasch: 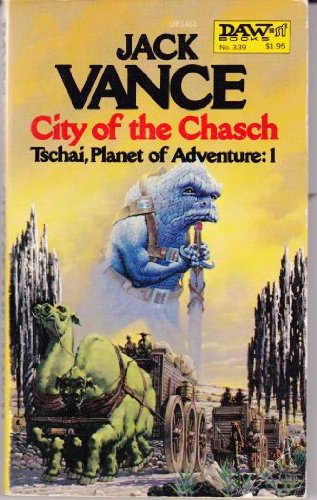 7
Story about a planet with curtain-like time 'zones'
9
Cartoon movie set on Mars, human kids with alien pet
10
Short story about exobiology during human exploration of an alien planet
44
SF story about a planet inhabited by *extremely slow* humanoids...?
12
Science fiction short story where explorers land on planet inhabited by humanoids who eat algae
6
Seeking a story about a forbidden planet with a genetic virus
7
Child's picture book; fantasy story with a green lizard in human clothes
25
Story or novel about elephantine aliens – NOT the Fithp!
15
Story identification - Desert planet with "Makers"