are the clones still good or are they not? would they go back with the Jedi? [closed]

Ask Question
Asked 8 years, 11 months ago
Modified 6 years ago
Viewed 7k times
-4
Closed. This question is opinion-based. It is not currently accepting answers.

Are the clones still on the good side a little bit or are the completely evil in episodes 4-6? Could they become good again?

It's clear from comments made in Episode II that the clones are engineered to follow orders from the chain of command, even orders that involve personal risk.

You see this really clearly in some of the battle scenes where the troopers counsel a particular course of action, but leap to it with "Yes Sir" when other orders are given.

So it's less a matter of good vs evil than just simply following orders.

If they were given orders to do 'good', they'd do good. Ditto for 'evil'.

The only clones that were wary about following order 66 were the commandos (From the video game republic commando). In the last scenes you are wary about the order and decide to help some of the jedi escape, fighting droids and your own brother-en at the cost of your lives. It is shown on http://starwars.wikia.com/wiki/Clone_commando that the clone commandos became later imperial commandos. However, it was shown in the game that your squad broke from their chain of command and decided to help the jedi escape. Here is a quote from the wiki to prove my point.

"The remaining Republic commandos were rechristened as Imperial commandos and incorporated into a special forces unit attached to the 501st Legion, under the command of the Sith Lord Darth Vader. However, a minority of commandos refused to comply with Order 66, either out of sympathy for the Jedi or due to other personal reasons. For instance, Ion Team did not carry out the command to kill their Jedi officers, viewing it as an invalid order and not believing that the Jedi would betray the Republic, and instead opted to ensure the survival of General Roan Shryne. Other commandos fled to Mandalore, choosing to go into hiding rather than serve as the enforcers of the Emperor's New Order."

So are clones on the good or evil side? No they are neutral like bounty hunters. They take orders without question, but uniquely in the game your squad thinks for itself and helps for the greater good against orders. I seriously cried at the end of the game.

Well, "good" is relative, but the answer seems to be yes.

The Order 66 arc of Star Wars: The Clone Wars showed that every single clone had an inhibitor chip placed in their brains during development. We then learn that these chips removed their free will and forced them to kill the Jedi. 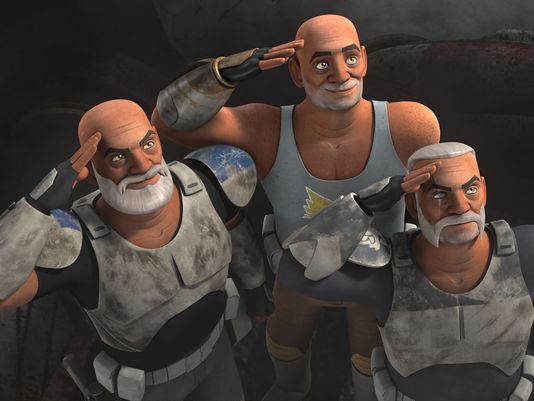 They help the Rebel Alliance and some of the surviving Jedi. They could therefore easily be described as "good."

Additionally, it could be argued that the clones were never really "evil" in the first place, as they were brainwashed into implementing Order 66 against their will.

36
Why did the Clone Troopers switch sides in Star Wars?
41
What canon evidence is there that Stormtroopers are/are not still clones?
20
Were the Jedi ever publicly accused of exploiting the clones?
7
Do the Sith know they are evil?
9
Are the Empire (or First Order) not using clones any more? If not, why?
3
When were the Clone Troopers replaced with regular humans?
8
Why would the Jedi not go public with their knowledge of the Sith, especially Count Dooku?