Which was the first novel set in universes where P=NP?

I wonder whether anyone has written a novel set in a universe where P=NP, in the event that there is more than one, which was the first? 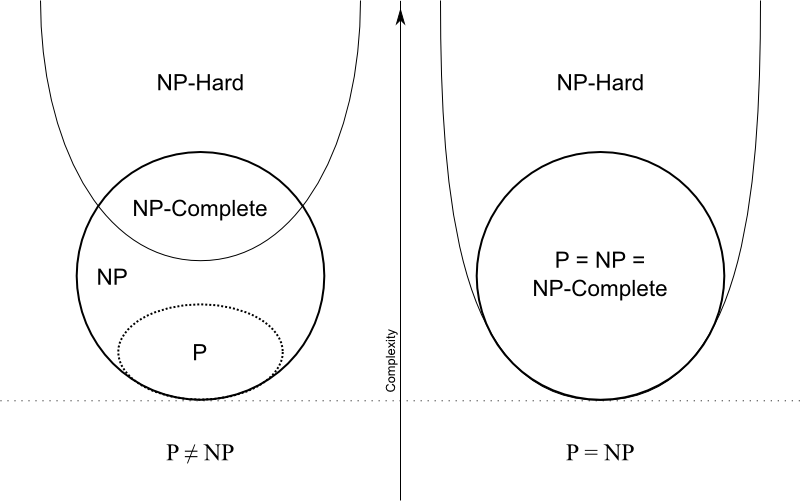 P=NP in the Star Trek universe, but the people there aren't aware of it. Evidence:

Or perhaps the Star Trek denizens are collapsing the polynomial hierarchy by technological means. The Federation, Borg, etc. seem to have ready access to time machines, wormholes, exotic matter, and superluminal signalling, so they could be using closed time-like curves for computation. This according to Scott Aaronson would allow them efficiently solve PSPACE-complete problems.

A short story that hinges on the fact that solving P=NP is a required prerequisite for developing a computer intelligence. It's available in his book Toast. Stross has put the full text of this book online. (This link will take you directly to the story.)

And according to Stross's site, the story was:

The other Stross book that deals with this is The Atrocity Archives, where Alan Turing solved P=NP, but they then found that doing so allowed access to the Cthonic Realms, so now an entire branch of Government exists to prevent this discovery becoming public knowledge.

In Vernor Vinges "Zones of Thought" series ("The Blabber", A Fire Upon the Deep, A Deepness in the Sky and the forthcoming The Children of the Sky), computation is easier in some parts of the galaxy, allowing for things like artificial intelligence and FTL travel.

It has been speculated (but there's no direct evidence in the books) that P=NP in these zones.

In the fanfic Harry Potter and the Methods of Rationality by Eliezer S. Yudkowsky, Harry gets a time machine and tries to factor the product of two large prime numbers using this machine, with a somewhat weird result. So it is not completely given that NP=P, but seems probable.

The Roaring Trumpet by Spague de Camp and Fletcher Pratt, published in May 1940 in Unknown. Here, psychologists posit that schizophrenics are actually mentally accessing alternate universes, and by applying the proper equations, one could travel to that alternate universe and bring the persons mind back to our universe. It was an intellectual exercise which the main protagonist Harold Shea decides to test out. He jokingly refers to travel via syllogismobile, but it involves studying and constructing the logic of the universe destination and reciting it out loud. This generally begins with "if P is equal to not P..." And goes from there. The entire Enchanter series has them universe hopping through mythology and fairy tale and classical works by doing so.

I suspect, never having given it any real thought, that by prefacing with P=NP, they were distinguishing the universe as one in which magic functions.

This seems a likely candidate. In the depicted universe, a robotic probe from our universe starts to self-optimize both physically and mentally while the human intelligence remains unaltered. Also physical objects tend to self-optimize: a wooden sleigh develops lubricant to easily slide on the road. This practice effect can be boosted by a special state of trance where the solution appears immediately by itself, hence inanimate objects perform a wide-range evolution within non-polynomial time (Seeking a near infinite array of posible solutions within a short period of time). This universe actually transcends P=NP.

In the story Starshield Sentinels by Margaret Weis and Tracy Hickman, there were computers/artificial intelligences that could answer any question instantly by sending the question back in time to itself, giving it 'time' to solve it. The only hiccup to this was that the computer had to be 'awake' long enough to solve it (something like Deep Thought from The Hitchhiker's Guide to the Galaxy needing 10 million years to solve the question to life, the universe, and everything).

While I don't know if this exactly pertains to everything P = NP, it does solve the variable/solve clause in the question.

Of course the computers all go nuts and try to kill everyone in the story. Can't we stop trying to invent killer robots now?

If I'm not mistaken, in Bob Shaw's 'The Ragged Astronauts', one of the characters spends a bit of time explaining how pi is 3 to another. If pi is 3, I can only imagine what the rest of the physics is like. (I only remember the scene at all because the whole scene was a bit out of place, which was pretty unusual for the book - otherwise it was a neat tale).

Not the answer you're looking for? Browse other questions tagged history-of hard-sci-fi mathematics or ask your own question.

61
Why does Data have to use a computer in Star Trek?
29
Did Data have enough memory or "hard drive space"?
20
Does the computer-system on the Enterprise NCC-1701-D still follow the basic architecture of a Turing Machine?
9
Does Douglas Adams use of 'Infinite Improbability' allude to P=NP?
20
Why are downloads destructive in the Star Trek universe?
7
Book about AI that are more powerful the longer they operate