In the new episodes of The Legend of Korra, (Beginnings, 1 and 2) it tells the story of the first Avatar, Wan and how he got his bending powers. He traveled to various lion turtles and got the elements from them, but in the new era they stopped giving people bending powers.

My question is: Would it be possible for a bender to free Vaatu and gain the ability to learn to bend more than one element?

Given the premise that Raava has joined her spirit to a human soul, creating the Avatar, (and making it possible for the Avatar to bend more than a single element) it is perfectly reasonable that the currently imprisoned Vaatu could do the same.

The only thing preventing it is that Vaatu lies imprisoned within the a tree in the Spirit World completely inaccessible to humans. Being the egocentric thing that Vaatu appeared to be, I can't imagine him joining himself to a human being, unless it was the only way to be free of his prison. 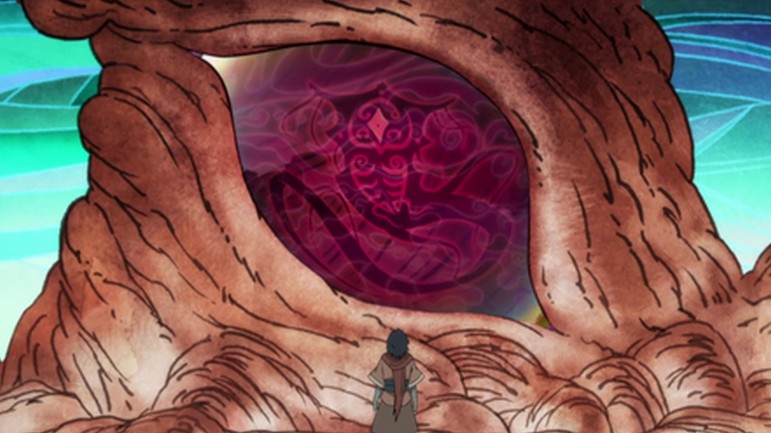 But first, for him to escape, the Avatar would have to open both the Northern and Southern spirit portals, and she would never do that...

To ensure Vaatu's imprisonment for eternity, Wan closed both the Northern and Southern spirit portals so no human would ever be able to physically enter the Spirit World again and release Vaatu. REF: DiMartino, Michael Dante (writer) & Heck, Colin (director). (October 18, 2013). "Beginnings, Part 1". The Legend of Korra. Season 1. Episode 19. Nickelodeon.

I doubt it; Raava herself didn't possess any of the four elements. She was made the vessel of Air, Earth, and Water for Wan, each until he could safely take up the power on his own. They were originally gifts of the Lion Turtles, just like how Wan got Fire from them and Aang got Spirit.

The Avatar State was an accidental discovery of Wan's, resulting from how Raava lent out each element's power to him; she possessed him. When she was was possessing Wan, he unexpectedly had access to her strength along with the Lion Turtle elemental powers that she had custody of.

tl;dr is no, without those particular circumstances Vaatu couldn't create a (literal) Dark Avatar. He could create a dark-empowered bender, we presume, and it's quite a good theory that the climactic battle of the series will be between Raava's Avatar and Vaatu's single-element Dark Avatar.

I personally think that as of now (Spirit, episode 8), this is exactly what Unalaq is trying to do.

Unalaq seems to know a lot about the Spirit world. Most probably enough to know the significance of the portals, and what is hidden between their openings in the spirit world. I doubt that he considers them as just a bridge to the spirit world or a possible quick way to get from the North pole to the South (to better keep a unified Water Nation).

It is no coincidence that he is attempting to get both portals open around the time of the harmonic convergence. If he can get both portals open, he may be able to free Vaatu, in hopes of bonding with him. Though Vaatu's distaste for humans may just lead to him destroying Unalaq after being freed. Then again, Unalaq seems to have great control over spirits (he may even have induced the chaotic spirits to attack the South to strenghthen his political position), and may be confident about controlling Vaatu so that they can merge. Once they merge, he may be able to destroy the Avatar, and possibly be in a position to rule the world.

Unalaq was also seen coming out of the Southern portal in Spirit, Episode 6 (Sting). This may indicate an ongoing collaboration between him and Vaatu. (Update: As of S02E08, this part is confirmed)

However, this "Dark Avatar" may not have all four bending abilities, just a lot of power. Wan got his bending from the lionturtles, bonding with Raava just gave him the ability to use them all at once.

EDIT: As of S02E12, I was correct in judging Unalaq's intentions! Yay!

It is highly unlikely that Unalaq would become the Avatar in the same sense as Korra (though the trailer for the finale seems to suggest something of the nature) since Vaatu didn't receive the elements like Raava did, but it could be possible. The easiest way is for the writers to say that Raava and Vaatu being connected means Vaatu will always be equal making it a battle of wills more than strength so he gained the elements over the time between convergences. The only other way would be if Unalaq had already learned the bending from other spirits and just needed the catalyst of Vaatu's power to allow him to do it. Since there don't really seem to be spirits who can bend though that we've seen, that's not really likely unless he found the lion turtles in the spirit world and convinced them to give him bending somehow. I think it's more likely that his existing bending will get supercharged and allow him to manipulate water in more states, maybe in ways that allow him to simulate air and earth bending using water in them in it's gaseous and liquid states. When he said that he would become the Dark Avatar it's more likely he meant the embodiment of Vaatu rather than being able to bend all elements though, since the theories above being used would be stretches or just coming out of left field.

12
How can Wan's history be reconciled with legend?
8
Were the lion-turtles energybending?
7
What happened to Vaatu?
1
What happens to Raava after fusion with Avatar?
10
Would the first Avatar have been a Firebender?
3
Could a Lion Turtle give Sokka bending?
2
Will the next avatar after Legend of Korra be able to master all four elements?
8
How were people first born with bending abilities?